Summer 2015 saw Quebec-based outfit Islands truck off to Toronto. Once there the group recorded two albums, Taste and Should I Remain Here at Sea?. Before you start conjuring images of Use Your Illusion-style excess, you needn’t worry. These are two distinct records. Each comes with its own set of emotional qualities and vibes. Secondly, who has time to be that bloated these days? Whereas Should I Remain Here at Sea? feels like an update on the decade-old Return to the Sea, Touch remains its own animal. Like its counterpart, Taste hints at a breakup and reveals some serious emotional pain. But the approach proves more clear-eyed, less acerbic. The nerves aren’t as exposed and the compositions more meticulous.

Taste opener “Charm Offensive” breaks the seal with its slippery, slithery synth figures that underline the narrator’s uncomfortable position. There are embers of past disappointments that lurk in any new beginning and knowing or not knowing how brightly they’ll spark can be an unsettling feeling. Those phantom feelings and failures hover above that tune and others here, namely the New Romantic-influenced “No Milk, No Sugar” and the would-be ballad “Cool Intentions.”

In the latter, we’re privy to the act of creation and the decision whether to sacrifice beauty for the sake of truth or if they can find harmony on the same canvas. That tension, as well as a well-constructed melody, keeps us on the edge our seat for two minutes and 50 seconds, and in the end we’re never quite sure which way our protagonist has gone.

“The Joke” doesn’t offer a respite in the way that one might hope and “The Weekend” reminds us how temporary sweet relief can be. Both bubble with a dark energy that avoids hope and forgiveness and instead brims with a commitment to catharsis. There’s a lot of destruction that goes into starting anew and that destruction becomes palpable through these and other songs. Only “Whisper,” which comes to take us home might allow us a sense of hope.

Taste’s darker explorations allow us to find ourselves. We need the heartbreak of “Pumpkin,” wherein the speaker tries to convince himself that he can change his lover. We need the complications of “It’s Heaven,” the self-doubt and loneliness that come in the wake of a new life. And we need to be reminded that we aren’t so special after all (“Snowflake”).

This isn’t to cast Taste as a meditation on misery or a work that only radiates unhappiness. There are those elements of course but the expression of those feelings is meant as comfort. This exploration of what happens as the soul grapples with transformation is one of the best of its kind. Despite itself it’s an affirmation that the brightest moments come only after a prolonged tour of the darkness. It’s hard to be honest about that and avoid cliché and somehow Islands have pulled that off.

Get thee a candle, some black clothing and prepare to dive into the depths of your own feelings. 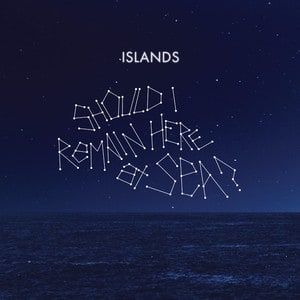 It’s been a decade since Islands issued Return to the Sea and in that time more than a little water has gone under the bridge. Well-received upon its release, the record set a pattern for increasingly positive critical response with subsequent albums. The Quebec-based group has seen its share of hardship. There have been lineup changes by the score and commercial fortunes have ebbed and flowed. But that hasn’t stopped Islands from returning with a record that balances its tendencies to be smart, sad and bent on having a good time in the space of a single breath.

The group opted for a spontaneous feel across the 10 tunes that comprise Should I Remain Here at Sea?. Tracking happened quickly with the first take of many pieces being the one for the ages. The slender “Fiction” has a raw power about it as it imagines a meeting of Robyn Hitchcock and The Strokes. The wise, sometimes brutal lyrics (“All your boyfriends’ tears/ could make me cum for years” from “Stop Me Now”) convince us that we’ve heard far more song than we actually have. By the time the final chord strikes, it feels like we’re at least 30 IQ points smarter for our troubles. Of course, those aren’t troubles at all. The off-the-cuff feel is exciting as we wait to see what comes next. In this case, it’s the breakneck life-in-a-day “Innocent Man,” which bleeds spontaneity, is just serious enough to transcend its own silliness and just silly enough that we don’t take it too seriously.

When things go dark, such as on “Sun Conure,” it’s more relief than disappointment. The early verses chronicle some kind of unraveling then try to build hope. Instead of providing hope, the song fades into the darkness, haunting us until deep into the pain-soaked verses of “Right to be Misbegotten.” There, we struggle alongside our protagonist as he hopes to find meaning in the pain: “Unrehearsed/undefined/ I’ve got the microphone but nothing comes to mind.”

There are ruminations on shattered promises galore via “Hawaii,” a late-night meditation on the changes that have come too late and the cold comfort that things will be different next time. “At Sea,” meanwhile, is a hymn to the future and all the relief embarking into the unknown brings. It’s probably no mistake that this is the album’s most sincere track, that it’s absent the acid tongue and wise-ass utterances that rev up on earlier pieces. There has to be some kind of resolution. Here, it’s the idea that we keep moving forward even when we want nothing more than to collapse under the weight of the past and how we remember its promises.

Heavy as all that may be we need weight such as this at times. It’s necessary to remind us that we are not alone, that we are all on the same journey, searching for something better than we have. The trick, maybe, is to laugh in the best times and fortify ourselves with the knowledge that this too shall pass.

Hunt Sales Memorial: Get Your Shit Together

Stamped into his personality and his music is a boldness that commands respect. …