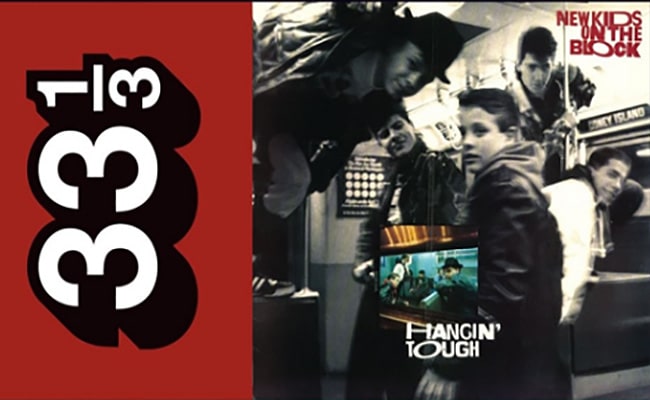 Hangin’ Tough may not put you in a trance, but it’s an admirable attempt to explain the funky dance.

Fans of the 33 1/3 series of books dedicated to classic albums gravitate to their favorite music, which usually means canonic titles like Live at the Apollo and Marquee Moon or indie benchmarks like Wowee Zowee. With few exceptions (Celine Dion and Super Mario Bros. are the most notable), the subjects of these modest volumes are almost universally critically acclaimed. Ironically, Hangin’ Tough is one of the boldest books in the series as it takes on music that is unashamedly commercial. It won’t convert the novice, but it’s an entertaining read.

Journalist Rebecca Wallwork doesn’t quite make the case for the musical quality of an album that sold 17 million copies worldwide. She admits she has the audio equivalent of “beer goggles” for New Kids on the Block, a group that she’s loved since she was a teenage girl. But the book is a good cultural study of a phenomenon that is too easily dismissed: ’80s fashion and pop music.

The author freely admits that in the ’80s, “everyone looked goofy.” While journalists who put themselves into their stories can be off-putting, the story of New Kids on the Block is perhaps best told from the point of view of a Blockhead, as the group’s fans fondly call themselves. Wallwork seems mystified, not that the group ever appealed to her, but that it still appeals to her and the thousands of other adult fans that flock to concert appearances taking place decades after the kids were teen dream fodder.

Only one chapter concentrates on the album’s music and it’s the weakest in the book. What makes it readable, even if you couldn’t care less about the band, is a narrative that opens a window onto the personal aspects of a group that seemed like no more than crass product.

The product was the brainchild of producer Maurice Starr, aka “The General,” who took a group of lower class white kids, fit them into a Jackson 5 template and made them pop stars. The band members attended schools that were predominantly African-American, so they came to R&B and hip-hop out of love. The Kids knew they were ripping off the Stylistics’ quiet storm falsetto and Prince’s dance moves; when the band protested that one particular dance their choreographer wanted to teach them came straight out of the movie Purple Rain, the choreographer pointed out that to the white girl demographic that was the Kids’ bread and butter, these would be brand new moves.

NKOTB’s managers would book the group to play for black audiences that would be far less forgiving of their bubblegum funk than white girls, and this forced the Kids to work harder to win over skeptics (Chuck D is reportedly a fan). Still, despite wearing its influences somewhat awkwardly on its sleeves, the band had an unexpected veneer of authenticity. The music video for “Please Don’t Go Girl” was shot at CBGBs and Astroland, which, as Donnie Wahlberg noted in an MTV interview, are now both extinct. This was a time when even the pinnacle of pop product had an eye on a bricks and mortar reality, an old, “real” New York cropping up in the most seemingly inauthentic place.

To bolster the case for her young charges, Wallwork cites a neuroscientist who suggests that the music we hear at the formative age of 14 shapes our musical taste for the rest of our lives. She also speaks to psychologists who study the emotional affect of music on the brain. To fans, the mere promise of New Kids on the Block—the anticipation of seeing them in concert, as much as actually seeing them – causes the brain to release dopamine, which ensures a kind of addiction to the group. Why one person’s dopamine is released by Donnie Wahlberg and another’s by Stephen Malkmus is a question the book never asks. The book Hangin’ Tough may not put you in a trance, but it’s an admirable attempt to explain the funky dance.