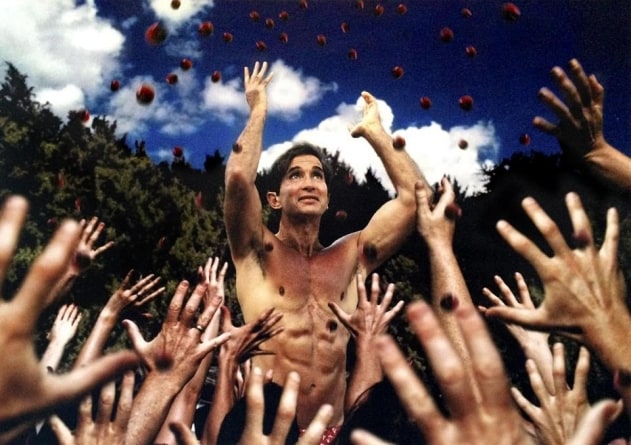 Holy Hell captures a moment in time and a religion that, while not outwardly terrifying, scared many of its members to their core.

Decades have passed since the large-scale cults of Jonestown, Waco and Heaven’s Gate—and the deaths that surrounded them—dominated the airwaves. In that time, cults have become shadowier and even more fascinating. Will Allen’s Holy Hell shows us the typical elements we expect from cult awareness documentaries—the mind-control, the love before everything went to crap—with an added veneer of glitz and glamour akin to Alex Gibney’s recent Going Clear.

Allen grew up seeking more out of life. After being cast out of his home due to his sexuality, his older sister invited him to join a group based out of Los Angeles known as the Buddhafield. The group, led by a charismatic and shadowy Frenchman named Michel, espoused love, acceptance and community. But in the cold light of day, Allen and others started questioning Michel and his teachings, eventually discovering dark secrets that traumatized everyone.

What Allen and the other members share about their experiences within the Buddhafield isn’t new to anyone who knows a thing or two about previous cults. The Buddhafield’s teachings are murky, but presumably based in Buddhist teachings of love and awareness; many of its members were seeking escape from either their damaged lives or staunch religious upbringings, but all sought enlightenment. Even the Los Angeles locale draws comparison to the Source Family, a religious sect that received its own documentary in 2012.

Unlike past cults, though, there is fun and beauty within the Buddhafield. Recruits were enticed by the number of beautiful men and women who surrounded Michel, a teacher and master who, unlike Jim Jones or David Koresh, was a good-looking, charming man content to show off his body. The Buddhafield isn’t populated with hippie flower-children, but members of the Benetton generation whose leader rocked out in a Speedo and Ray-Bans. These children of the 1980s encapsulated in both religious fanaticism as well as the wealth and prestige the decade symbolized.
With so much beautiful, white flesh on display, it’s hard not to feel like the Buddhafield was a clique cult.

Allen’s own sister admits heavy people were not accepted in the group and there’s no discussion about the profound lack of people of color. There’s also little mentioned about the role of class, and how many of the members were wealthy, or at least came from financially stable homes. Maybe this was avoided for fear of comparisons to Manson’s wealthy penitents? Either way, despite the horrors that are later imparted, it’s difficult for audiences to truly fear this is a cult affecting the average person.

Most viewers will also find it difficult to identify with the Buddhafield’s ethos. Various interview subjects talk in vague terms about the group feeding one’s soul, and rituals like “Shakti” and “The Knowing” but because the group’s leader was never able to explain these processes, neither do the members, leading to questions about how, without the aid of drugs, this man could control so many—”He took 120 minds and manipulated each one.” Much of this is chalked up to Michel’s past as a hypnotherapist, but that’s purely conjecture from a group of laypeople.

In fact, there is a knowing awareness that the various subjects possess about the Buddhafield. Many joke about it being a cult, but “if this was a cult, at least it was a really good cult.” When the abuse allegations are eventually revealed, each of the members reacts in their own way, but many remain steadfast in their belief that, no matter how traumatic it was, they were shaped by their experiences in the group. “I both regret it and I don’t regret it,” one member says, and that’s due to the intrigue cast around the Buddhafield’s leader.

When Allen takes a closer look at Michel, later called Andreas, Holy Hell takes on the air of a modern-day mystery. Who is this French-accented man? Was he “an out of work actor who stumbled on the role of a lifetime” as one member claims, or a messiah who had “gone into the cosmos and come back”? The film splits into two halves, showing both the happy, fun times before Michel fancied himself a god, and after. Whether those two halves were always present is up for debate, but Allen shows the enigmatic facets of his savior.

Allen, himself, takes on added significance as he served as the Buddhafield’s photographer and videographer, giving us some incredibly in-depth and personal moments. Cult leaders and their rituals have been captured on video before, usually in snippets, but Allen relies on his own footage to illustrate the weird, strange and oftentimes hilarious events that took place

Holy Hell doesn’t break new ground regarding the world of cult control, but there’s a flair to the Buddhafield that’s compelling on its own terms. Holy Hell captures a moment in time and a religion that, while not outwardly terrifying, scared many of its members to their core. If you’re already fascinated by the world of religious fanaticism, Holy Hell will leave you captivated.

Kristen is a Sacramento native and alumnus of CSUS with a Masters in English. Her work has been published at Film School Rejects, The Playlist, Awards Circuit, and Cinema Sentries. She's also the Associate Editor at ClassicFlix and the owner of Journeys in Classic Film. Her tweets can be found at Journeys_Film.