Despite his voluminous output as both a director and a screenwriter, Ettore Scola (who passed in January at the age of 84) isn’t usually mentioned as one of the great Italian filmmakers. Initially known mostly for his satires, Scola was was nominated for five Academy Awards during his career. So why isn’t Scola up there with Fellini, Antonioni, De Sica and Bertolucci in the pantheon of great Italian filmmakers?

One only needs to revisit his Golden Globe-winning drama, A Special Day (1977), to realize Scola deserves his place at the table with the directors mentioned above. Taking place on May 6, 1938, the day when Hitler and his staff came to Rome to meet with Mussolini and King Victor Emmanuel III, A Special Day chronicles the relationship of Sophia Loren’s demure housewife and her neighbor, Marcello Mastroianni’s homosexual intellectual who has been slated to be deported by the Fascist government.

Although A Special Day was filmed decades after the defeat of Mussolini, Italian politics were still tumultuous. The Fascists had morphed into the Italian Social Movement, which further splintered in the late ’70s into other fringe groups intent on carrying out right-wing terrorist violence. The Blackshirts may have been long gone, but its ghosts still carried on. Scola, a member of the Communist Party, made it his mission to remind audiences what life was like under Fascist rule.

A Special Day is deceptive because it takes two of Italy’s most beloved stars and casts them against type. Loren, the busty icon of steamy comedies and romances, is almost unrecognizable as Antonietta, the weary mother of six, while frequent lothario Mastroianni is Gabriele, the doomed homosexual who realizes his time is almost up. Scola takes his time before we see the stars, as six full minutes of archival footage of Hitler’s visit starts off the film. It’s majestic and it’s frightening and Scola was wise to use newsreel footage to capture the scope of that day, as thousands of Italians took to the street to witness the moment when the Führer met Il Duce.

Soon, Scola’s camera takes us to an apartment building and into the main story of A Special Day. Desaturated, the film exists somewhere between color and black-and-white. It’s the crack of dawn, and Antonietta is waking her husband (John Vernon) and her children so they can go out and witness the spectacle. Her husband is more in love with the Fascist Party than his wife, who he treats with little regard. She is expected to stay home and take care of the house while he and the kids get to attend the rally. 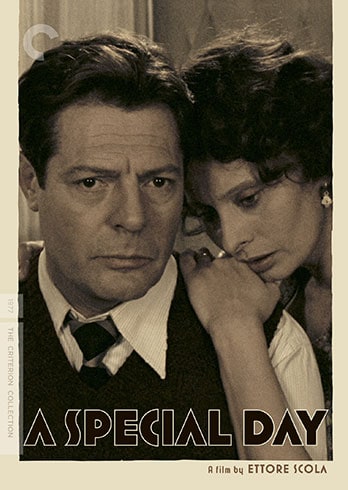 As Antonietta begins to clean, we can hear the sounds from the rally loud and clear from a radio left on nearby. The apartment complex is more or less empty, and Antonietta has a big day of housework to accomplish. Like most Italians, Antonietta has bought into the story of Mussolini. She loves him, idolizes him, even tells a story about passing out once when the great man rode by her on a horse. Artifacts of her adoration fill the apartment including an album with photos of Mussolini and a poster of Il Duce she put together using buttons. It’s as if the man was a rock star.

A trick of fate introduces Antonietta to Gabriele, the man who lives across the courtyard. A former radio announcer, Gabriele has lost his job because of his anti-Fascist beliefs. He is different than her husband, prone to breaking out into dance and playing practical jokes. Just before Antonietta arrives (her mynah bird escapes and flies across the courtyard), Gabriele is about to commit suicide. But this chance encounter gives him a respite, and with no one else left in the building, they decide to spend the day together.

As Antonietta slowly falls in love with Gabriele, Scola slowly reveals that he is, in fact, gay. In Gabriele, Antonietta sees someone who hasn’t been beaten down by the austerity of the Fascist regime. He offers her a copy of The Three Musketeers, and she realizes she hasn’t read in years. Her life has been completely given over to her children and husband. She is both fascinated and baffled by this man.

The idyll, however, is interrupted when the building’s superintendent catches the pair together. She derides Antonietta for associating with a known anti-Fascist, an encounter that prompts Gabriele to come out to her in an emotional torrent. Mastroianni is so good in the role, one of his finest, netting him a nomination for a best actor Academy Award. All the while, the soundtrack of the rally is carrying on.

Eventually, the two characters connect, making the encounter an indelible experience for both of them. It is unlikely they will ever meet again, but the impact of that fateful afternoon has likely changed them both irrevocably. For once, Antonietta has been challenged to think beyond the Fascist rhetoric that has engulfed her family and her country. Scola presents a sliver of light ahead of the dark storm that would overcome Italy and begs his audience not to repeat the same mistake of the generation before.