“Are you going to go to the Portland show?” my friends all ask me once the Cure announced their fill-in-the-gaps date in Ridgefield, WA, a dozen or so miles north of Portland in a suburb of Portland’s northern suburb, Vancouver.
“I’m not sure,” I responded. I was angry at this point because I had just paid for my room and flight to LA three days prior. And now I had to consider a new set of logistics.

I mean, let’s be honest: bands age. And they grow old. And they start to suck. So, I was tentative about seeing them twice. The Cure is not immortal (or so I thought); it had been almost 11 years since I last saw them at Sasquatch. Back then, they put together a three-hour set, and it was terrific. But should I expect the same?

After attending two shows, I can confidently say “Yes!” The Cure exceeded expectations.

In the run-up to the show, my friends and I diligently followed their setlist.fm entries. They debuted new material, played a huge variety of over 70 songs and every night’s show was distinctive from the night before. Most of them numbered in the 30-song range and lasted upwards of three hours (sorry Sasquatch 2016 fans!).

At the Hollywood Bowl (night one of three sold-out shows), due to legendary LA traffic and an enormous throng of black-clad people precluded us from seeing all but one song from the wonderful opener, the Twilight Sad. As we made it to our wooden-bench seats, we had a view of the Hollywood sign and the cement-domed stage.

The Cure hit the stage promptly at 7:30. I later heard there was a hard stop time of 10:30 for this evening’s show, which explains why the opener started at 6:00. While we couldn’t see the members’ faces, large video monitors on the left and right of the stage showed us live-feed images of Reeves Gabrels and Simon Gallup(‘s crotch).

The light show (which I later learned from a friend is a rigging the band owns and takes on tour with them), backing video and sound were phenomenal. The sound was especially good for a 17,500-person outdoor venue. Sure, if the wind changed, we’d lose a couple of measures of Gallup’s trebly bass, but other than that, it was a quality experience.

The arbiter of how good the shows were was essentially the set list. This time through, the Cure weren’t supporting a new album; rather they were just showing off their new(ish) guitarist Gabrels’ massive guitar skills and a couple of new songs (“Step into the Light” and “It Can Never Be the Same”—both are superior to much of their last album’s material).

Notable items from the set included a three-song intro matching the track listing from Disintegration (“Plainsong,” “Pictures of You” and “Closedown”) as well as the pop-tinged rarity “2 Late” (in which Smith freely admitted he completely botched the lyrics). “Trust” from 1992’s Wish album was a well-placed downer, which almost brought tears to my eyes, followed by a surprisingly robust and lively version of “Want” from the oft-forgotten Wild Mood Swings (1996). I was shocked that “Want” was the highlight of the performance, because they also played one of the top tracks I wanted to see on this tour (“Disintegration”). Another highlight was the nearly full-time guitar solo in “All I Want,” which punctuated three songs from The Top in their second encore. The energy was incredible.

My previous hesitations about seeing them twice were arrested as every note was accurately delivered on guitars. Roger O’Donnell, who rejoined the band in 2011, added a hefty helping of his critical keyboard parts (which were sorely missed for a few years—the last time I saw them, he was absent, and some of the keyboard work was done on guitar, but it just wasn’t the same). Smith’s delivery of some of the higher vocal parts were delivered about 75% of the time.

After three hours and four encores, they closed with a radio-friendly set including “Why Can’t I Be You?”, which was significantly altered vocally (and understandably so), and with the quintessential doom-pop song “Boys Don’t Cry.”
In Portland, we made a point to be there early enough to see the Twilight Sad pour their hearts out in shoegazey bliss. The skinny, Scottish lead singer sang with jerky movements and you could tell opening for the Cure was a humongous highlight in the band members’ lives. While the rhythm section tended to be a tad monotonous, they were an enthusiastic and worthy accompaniment.

As for the Cure, we were treated to some more deep-track/B-side songs which made the evening even more dazzling than the LA show. Our seats were significantly better, as well (20th row), allowing us to see facial expressions instead of just LED panel video of the members.

Opening with the gritty, punk-loud “Shake Dog Shake,” and accompanied by monochromatic and jerky silhouettes of the band, the song set the tone for the Portland show—the set included a wild ride spanning much of their catalogue with much more variety and breadth. Whereas the Hollywood show focused on Disintegration-era songs (eight in total), this one included no more than four tracks from any album. They busted out gems from Japanese Whispers (1983), The Top (1984), Pornography (1982), Faith (1981) and Seventeen Seconds (1980), an album sorely underrepresented in Hollywood. In both shows, I felt the placement of “A Night Like This” early in the set to be sort of awkward, as it is a perfect set-closer. Nevertheless, this show was a much better representation of the various moods and playing styles that the Cure represents. 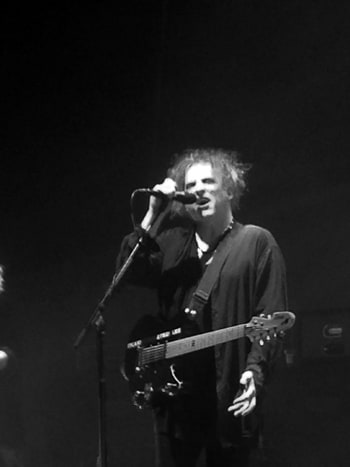 When they launched into the B-side cult hit “This Twilight Garden” (which inspired one of my band’s names), my wife squeezed my hand. This was one of her top picks. Smith broke out a double flute and switched between 12-string electric and flute during “The Snakepit,” another underrepresented song on the tour. I was shocked when one of my picks, “From the Edge of the Deep Green Sea,” was delivered in full album-quality vocal glory; that song is nearly impossible to mimic vocally, and it was incredibly impressive to see Smith do it live while in his late fifties.

When they started “M,” I gleefully listened to dazzling and an almost album-perfect rendition of the opening harmonics on guitar. I felt fortunate to witness “One Hundred Years” in both sets, and the imagery broadcast on the screens was particularly compelling and dovetailed perfectly with the lyrics.

The first encore featured “Other Voices” from Faith, yet another rarity on the tour. On the whole, the Ridgefield experience was better. The energy of both crowd and band was generally better in Ridgefield as well, although people should have sung the lead line in “Play for Today” like in the live album Paris, which probably would have made O’Donnell’s night. The chorus of people singing along to “Just Like Heaven,” “Push” and “Let’s Go To Bed” made it a ecstatic experience. We were standing, and dancing, the whole time (which begs the question: why do we have seats again?).

While the LA show lacked much of the later material (there was, thankfully, nothing represented from 2008’s 4:13 Dream and only one track from 2004’s The Cure), both sets included the bombastic (that means “overblown,” not “really loud”) “Wrong Number.” While it showcased Gabrels’s guitarmanship, the song is simply weak. Similarly, both sets included “Never Enough,” also a likely contract-obligation pop song that could easily be relegated to the dustbin of history (that said, Gallup and Jason Cooper made it interesting with punctuated stops and starts). As Smith commented on the cowbell he brought out onto the stage, I almost vocalized my “What the fuck?” A) I’m a pretty big Cure fan, and I had no idea what this song was going to be. B) It was “Freakshow,” a terminally incoherent and practically unlistenable track from their latest album. No Cure song needs a cowbell.

Here and there, as the hardcore fans slogged through many of these new tracks, I did have to wonder: “Do the band members really think that these are good songs?” Because the powerful imagery evoked from “Lullaby,” and the gorgeous, yet-linear pop bliss of “Charlotte Sometimes” simply blow away these newer songs.

Nevertheless, I’ll take the highs with the lows. What I mainly learned from this is that the Cure still have it. Gallup is sexier now than he was 30 years ago. Cooper still needs to close his hi-hat in “A Forest” and take another listen to “Burn,” but other than that, he slayed most of the drum parts. Smith has lost about seven inches of hair and waist and manages to nail every solo he attempts, all the while mostly staying true to even the most challenging of vocal parts. O’Donnell’s contributions are completely welcomed back (thanks for that killer lead line in “Fascination Street”). And Gabrels, the new man in the group (since 2012), proved his tremendous mettle. Porl Thompson’s (grandfather Goth) boots are very hard to fill, and it was impressive to find someone who managed to do so.

After the show, I received texts, calls and messages from people gushing about how much they enjoyed it. The consensus is there: the Cure are a force to be reckoned with and are worth the flights, the hotels, the missed opportunities to meet them (this is my third miss), the money and the handful of crappy set list decisions. Many favorites were represented in just two shows, and if you manage to see more than one show, it will likely be worth it. There’s still time left. They’re playing much of the rest of America this summer and will continue in Europe even later. Pick a place you want to see and go. You won’t regret it (unless they play “Freakshow” again).