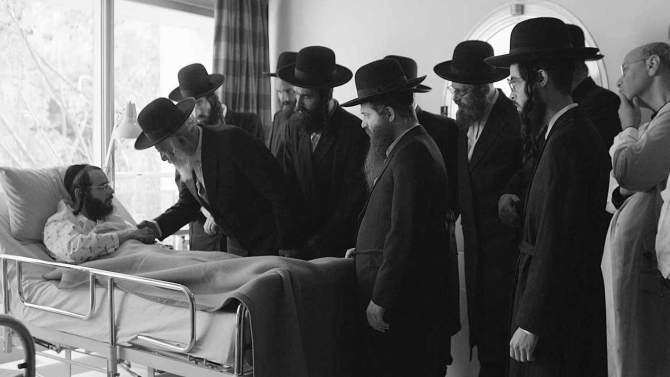 Tikkun is a film in which the tension pays off, and it does so in shocking fashion.

The most immediately notable element of Tikkun, Israeli filmmaker Avishai Sivan’s third film, is that the camera doesn’t move. Aside from a few Hitchcock zooms it remains almost entirely fixed. The characters tiptoe their way through these beautiful black-and-white shots rather than dominate them and the viewer is tasked with carefully watching for motion. This couples with near-silence (the film has no score and minimal dialogue) to result in a tense waiting game, a high-minded Paranormal Activity in which the viewer waits on edge for something to break the stillness.

Tikkun is the story of young Hasidic scholar Haim-Aaron (played by Aharon Traitel) who dies while on the brink of sexual self-discovery only to be revived after forty minutes by his father. Haim-Aaron awakens to find his faulty eyesight cured but his faith in crisis, much to the chagrin of his devout family. His father experiences apocalyptic visions that look like something out of The Ring and his mother begins to worry about his influence on the younger children in their household. Worse, Haim-Aaron finds himself unable to sleep and spends his nights hitchhiking into the city where he spends time in the company of prostitutes and party-animals.

Sivan keeps things at a dreamy pace, and it is a credit to debut actor Traitel, himself a former member of the Hasidic community, that Tikkun remains dynamic. It’s a brave role, as he has one of cinema’s more revealing male nude scenes and later participates in one of cinema’s more disturbing sex acts. He is also tasked with portraying Haim-Aaron’s personal crisis of faith while roaming through fixed views of his family’s claustrophobic home, the library of his yeshiva and Jerusalem’s foggy nighttime streets. He accomplishes this admirably and Haim-Aaron’s journey is compelling despite the film’s slow pace.

This journey leads towards a conclusion that is shocking and completely at odds with Haim-Aaron’s Hasidic faith. The ending is graphic, but fits, particularly as a bookend to the aborted sexual awakening that led to Haim-Aaron’s death in the first place.

While the journey and its conclusion work, the plot occasionally stumbles. Sivan’s determination to keep the storytelling strange and the pacing slow is admirable, but as a result Tikkun often feels ambivalent rather than mysterious. Several key confrontations occur seemingly out of nowhere, while other conflicts are introduced only to be forgotten.

What also doesn’t work is the film’s depiction of women. There are only two female roles of any significance and neither come off well. Haim-Aaron’s mother is written and portrayed as shrill and hysterical, whereas a young woman who gives Haim-Aaron a ride later in the film is initially a warm, beguiling presence but then is punished terribly in ways that further the plot but feel particularly awkward considering the lack of any other significant female roles. In addition, one of the film’s only attempts at humor is a mean-spirited gag featuring a plus-sized prostitute.

Still, there is much to appreciate in Tikkun. One particularly refreshing element of Sivan’s filmmaking is how proudly he pays homage to other filmmakers. Alfred Hitchcock is the most obvious. The Master of Suspense’s presence is felt in the form of several old-fashioned dolly zooms and a piece of disturbing foreshadowing in which a brisket is defiled. The film’s few tense, old-fashioned car scenes will immediately bring to mind classics like Notorious and North by Northwest. Sivan also makes clear nods to Darren Aronofsky and David Lynch. Despite these clear inspirations, Sivan’s minimalistic approach and the careful depiction of the Hasidic community make Tikkun feel entirely original.

Every shot of Sivan’s stationary camera holds a mystery as Tikkun invites viewers to search every frame for meaning. This search feels not only voyeuristic but also foreboding, and as each slow, quiet moment passes the tension builds. Luckily, Tikkun is a film in which the tension pays off, and it does so in shocking fashion.