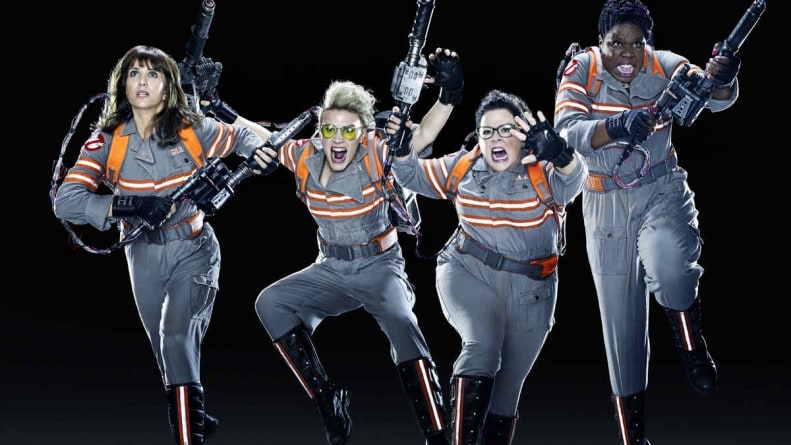 You may not be afraid of no ghost. You won’t even be afraid of having your childhood dreams dashed. You will just be disappointed.

There is a scene in Paul Feig’s reboot of Ghostbusters where Abby Yates (Melissa McCarthy) is scrolling through some comments at the end of a YouTube video. Yates hopes the clip, featuring a frightening stand-off with a ghost in the subway, is proof that phantasms actually exist. Instead, she reads this comment: “Ain’t no bitches gonna hunt no ghosts.” It’s a sly reference to the heat the film has faced from fan boys of the 1984 original, upset that this reboot features female leads. I was afraid to give Ghostbusters a negative review or forever be called a misogynist. No, I don’t hate women. Ghostbusters is simply a terrible movie.

Hollywood is not capable of leaving any concept, good or bad, dead (or undead) and 32 years later we have a new version of Ghostbusters. Feig once again tries to populate a genre that features male leads with women. This isn’t the first time someone tried to replicate the lightning-in-a-bottle success of the original. There was a crappy sequel and a half-hearted stab at an animated series. So what could Feig and co-writer Katie Dippold learn from those blunders? Was simply swapping the gender of the lead characters enough?

Happily there is no correlation between the female characters and their male counterparts. There is no direct stand-in for Venkman or Stantz. Each of Feig’s cast is given an entirely new role, though most of them are not very believable. Kristen Wiig stars an Erin Gilbert, a professor at Columbia who is up for tenure. When a book she wrote in the past (with Yates) about paranormal activity surfaces, Gilbert is shown the door. Umm, okay. So she reluctantly joins forces with Yates and her partner, the hyperactive Jillian Holtzmann (Kate McKinnon), when she learns that a local mansion may be haunted. It isn’t long before Patty Tolan (Leslie Jones), a former MTA worker, rounds out the group. As more and more hauntings plague New York, the women find themselves in high demand.

Wiig and the gang are likable enough (although McKinnon really chews up her scenes) but the big problem here is the plot. Sure, Zuul and the Gatekeeper/Keymaster business from 1984 isn’t that great of a story, but at least a cohesive thread held the film together. This version of Ghostbusters feels like a series of loosely connected scenes that usher the audience along until we reach a climax of mass destruction akin to something you see in a Marvel movie. A lot of poorly done special effects and very little heart. This is a movie built to make money and Feig stumbles a bit when aiming for that PG-13 rating. More profanity and more wedding dress shitting, please. It’s strange because there are some genuinely scary bits to the movie. Why dial back the comedy? With the chastity cuffs firmly on, Feig is forced into mediocrity.

Then there’s Chris Hemsworth, who takes on the Annie Potts role as the Ghostbusters’ secretary. However, his Kevin is so dumb, it’s amazing he can function in the world. Yes, he’s handsome and Wiig’s character is constantly making a fool of herself hitting on him, but Kevin is so dumb it’s unbelievable. Like, not knowing how to answer the phone dumb. The best part of the first Ghostbusters films is it feels like real people thrown into an extraordinary situation. When you have a character as poorly drawn as Kevin, it is impossible to suspend your disbelief when the ghosts come in.

Worst of all, the movie just isn’t funny. Even if it tries to separate itself from the 1984 film, most of the original cast shows up in increasingly awful cameos. More concerned with special effects than plot, Ghostbusters doesn’t even let Wiig and McCarthy do what they do best. Instead, they more or less stand around until the next ghost comes along for them to scream at. Sorry, folks, your fears that this film is awful will not be allayed. You may not be afraid of no ghost. You won’t even be afraid of having your childhood dreams dashed. You will just be disappointed.