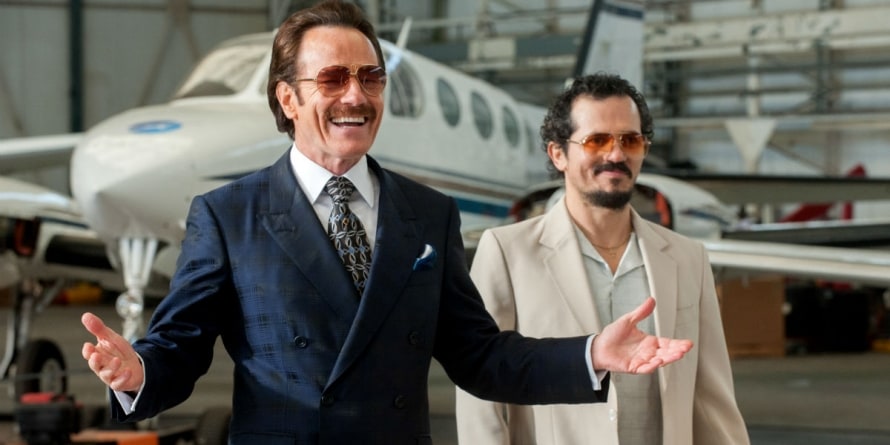 Outside of the dense character work and exemplary performances from even the bit players, The Infiltrator is lackluster in every other stylistic aspect.

In the tradition of drug war-fueled crime thrillers, The Infiltrator has little new to say. This isn’t a genre reinvention. There’s not much that unravels here that hasn’t unraveled similar films based on true stories. But what the movie lacks in ingenuity, it delivers in understated gravitas and pure entertainment value. Lincoln Lawyer helmer Brad Furman directs from a sharp script by his mother, Ellen Brown Furman, offering deep characterization and tense drama that bursts at the limiting seams of a feature length run time.

Bryan Cranston stars as Robert Mazur, a capable undercover agent for U.S. Customs. He’s paired with hot head partner Emir Abreu (John Leguizamo), who enjoys playing a criminal too much for Mazur’s straight-laced tastes. For Mazur this is just a job, one he happens to be exceedingly good at. Thanks to Breaking Bad it’s hard not to see some of Walter White’s obsession with greatness in Mazur’s quest to bring down Pablo Escobar, but this is a very different character arc. Mazur creates a fake money laundering business as Bob Musella, where he and Abreu expand the reach of their enterprise to include the money men close to Escobar’s empire. To do so, he has to get deeper into character than he’s used to, shattering the work/home life separation he values so deeply.

Of the myriad conflicts bred from this journey, the film’s greatest feat is Mazur’s arc. When the film begins, Abreu’s unstable addiction to living in this manufactured world of vice reads as blatant foreshadowing for Mazur’s own descent, but The Infiltrator is less concerned with the plight of crime fighters who rely on deception than on the collateral damage of those they’re tasked with deceiving. There’s some early Nancy Reagan moralizing from Mazur that implies a “drugs are bad, mmkay” kind of monotony that gives way to a much more fascinating look at the complexities of undercover work. Despite the high octane promotional ads, the real meat doesn’t lie in the escalation of life or death stakes. Instead, it’s found in the systematic easing of tensions among the dangerous individuals Mazur and Musella succeed in befriending.

The Infiltrator offers a striking approach to the well-worn tropes of cinematic subterfuge. The usual scenes establish the clear and present danger inherent to infiltrating a criminal organization as Mazur bails out a former informant named Dominic (an incredible turn from Preacher’s Joe Gilgun to act as Musella’s muscle. Dominic’s primary function is to reinforce how thin the high wire they’re perpetually dancing on really is, but a mixture of Mazur’s professional skill for lying and Abreu’s street credibility keeps them alive. Each of those tension building plot points is paired with an equally endearing follow-up once Musella has won over new trust. At first, these scenes feel extraneous, as they linger longer than logic might dictate. But that’s where the real tragedy lies.

The more comfortable these criminals are around Mazur, the more heart wrenching the film becomes. These budding “friendships” aren’t just set dressing to sell how deep Mazur has gotten, but they create a new kind of suspense more nuanced than the typical shoot-em-up. When Gonzalo (Rubén Ochandiano), one of Escobar’s men, begins to leave off his trademark sunglasses around his new friend Musella, it’s a visually subtle marker for a brand of masculine intimacy the film leverages for greater tribulations. The film’s second half fosters a real stomach churning sense of dread knowing that at some point Mazur is going to close the case and every one of these men we’ve come to know as actual people and not faceless thugs will be in prison. By that point, the particulars of the drug trade and the intricacies of the industry’s sociopolitical implications falls away and a very human reaction to betrayal takes over.

Generous screen time is given to ancillary plots, including Abreu’s realization that his current pace is unsustainable, and Juliet Aubrey does stellar work in a limited role as Mazur’s wife Evelyn, but the film’s ambition is its own undoing. Mazur’s boss Tischler (Amy Ryan) tells him that every case has a beginning, a middle and an end, and he’s begging for more time. The film is the same way; it barely cracks two hours, but there’s enough material for a television miniseries. Furman admirably shoots for a crime epic in an economical framework, but the film would have greatly benefited from more focus.

Outside of the dense character work and exemplary performances from even the bit players, The Infiltrator is lackluster in every other stylistic aspect. It has a serviceable bent on the genre, with harsh lighting, uninspired needle drops on the soundtrack and one of the laziest attempts at the Scorsese-esque long take in recent memory. But as a vehicle for Cranston’s trademark slow burn transformation work and a meditation on the nature of lying for a living, it’s a fine exercise. In a few years, expect some enterprising network to do the right thing and adapt it for television like it was meant to be.