It’s fitting that three of the best rock ‘n’ roll films of all time emerged from the genre’s most important decade: the ‘60s. A Hard Day’s Night (1964) may play to the Beatles’ goofier side, but Richard Lester’s film is still an exercise in rebelling against the norm. Meanwhile, Gimme Shelter (1970) depicts the crushing end of the hippie dream via the Rolling Stones’ disastrous and tragic 1969 concert at the Altamont Speedway. Burbling up in the middle, like some pastiche of a dream is D.A. Pennebaker’s film about Bob Dylan, Don’t Look Back (1967). Neither a straight narrative such as A Hard Day’s Night or a concert film like Gimme Shelter, Pennebaker’s movie is like the artist it chronicles; beguiling, confusing and impossible to pin down.

In many ways, Don’t Look Back presents a more inscrutable portrait of the artist than Todd Haynes’ fractured biopic I’m Not There (2007) where a slew of different actors, including a black child and Cate Blanchett, depict different aspects of the Dylan mythology. Here, we see the musician on tour in England in 1965. Dylan has already gone electric on the first side of Bringing it Back Home, but he’s still a year away from the infamous “Royal Albert Hall” show where an audience member called him “Judas.” This incarnation of Dylan is on the cusp, rejecting the folk songs that made him famous but still playing solo acoustic concerts. 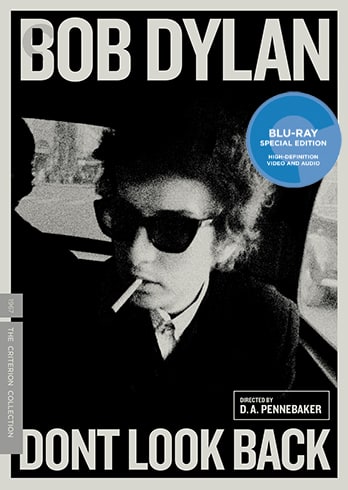 Yet, by the time Don’t Look Back debuted in 1967, this version of Bob Dylan no longer existed. First, the famous motorcycle crash of 1966. Then he beat a retreat to Woodstock, New York to raise a family with his wife, Sara. This shard of Dylan, captured by Pennebaker, only existed for a short time. This Dylan, caustic, self-righteous and spiteful already seemed weary of himself and the hangers-on looking to capitalize on his fame. If the Beatles from A Hard Day’s Night made a gag out of outrunning gaggles of screaming fans, Dylan comes across as simply annoyed, as demonstrated in a scene where a girl hangs to his car as it pulls away. He’s fed up with fame and all the bullshit that comes along with it.

Pennebaker’s film emulates this version of Dylan. There is no clear story or even extended sequences of the artist in performance. Instead, the film contains glimpses of Dylan sparring with journalists, putting down Donovan and sitting by while his fame makes everyone around clamor for his attention. The only decisions made by Pennebaker is what to include in the film and when. Nothing is scripted like A Hard Day’s Night. There is sense of impending doom like what fills Gimme Shelter. This is cinema-vérité at its most raw.

Although Don’t Look Back does not present the most flattering vision of Bob Dylan, there is no denying his magnetism. Even when sharing the screen with Joan Baez and his no-bullshit manager Albert Grossman, Dylan is absolutely riveting. But unlike the playful Beatles or the sexy Mick Jagger, this Dylan doesn’t give a fuck about you or anyone else. It’s that self-created mythos that makes him so intriguing, that guy in high school who sits in the back of the room with long hair, writing poetry. You want to know him and he ain’t making it easy.

Dylan is a study in contradictions. He understands the fame game, playing on the phony importance we assign to pop stars. He doesn’t want us to take him seriously, but all his actions and words scream of self-importance. But there is no denying the power of his songs. When Dylan actually does play some music in Don’t Look Back, it is absolutely riveting. Pennebaker made an interesting decision to more or less ignore performance and focus on Dylan’s backstage antics. In his scathing 1968 review of the film, Roger Ebert wrote, “When Dylan sings, he has hold of something precious. It is only his pathetic private life, as he has revealed it in this film, that should be dismissed or regretted.”

Don’t Look Back is a moment frozen in time featuring one of the most important artists of the 20th century. It’s just something one has to experience with expectations held in check. That’s the point of the film exactly. People expect too much out celebrities. Dylan understood that. Pennebaker and Dylan only give us what they want to give us. Don’t Look Back can be frustrating and difficult to watch, but shouldn’t a film about Bob Dylan be as such?