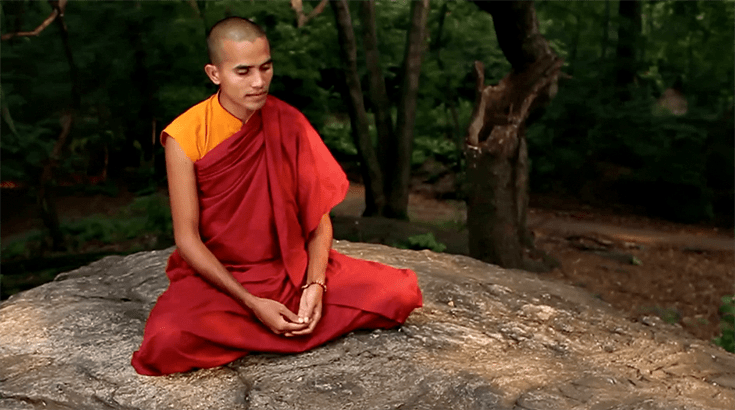 On Meditation is beautiful to look at, but it’d be incredibly more important if it simply focused on the practical applications of a mindful life.

Western medicine is finally catching up to Eastern traditions. Mindfulness is now a key component of many plans to improve both mental and physical health. In a digital age where mindless distractions are at an all-time high, the need to center oneself and simply focus on something as simple and integral as the breath has never been more important. Ultimately, what is life beyond awareness of the present moment and all its splendor?

And if you’re rich and famous, all the better.On Meditation offers visually pleasing portraits of notable people explaining their mindfulness practices. Giancarlo Esposito shares how he was able to imbue his “Breaking Bad” villain Gus Fring with such unnerving calm by meshing the effects of his meditative practice with his acting work. David Lynch cites how he’s relied on decades-worth of Transcendental Meditation to keep himself operating at a maximum level, while notably failing to mention the often impractically sizable price tag associated with obtaining a TM mantra. Business magnate Russell Simmons declares that, despite the multiple businesses and charities he runs, he dedicates a full 2.5 hours a day to meditation—while failing to point out that the average person typically spends those hours on such plebian chores as preparing their own food or folding their own laundry.

On Meditation is beautiful to look at, but it’d be incredibly more important if it simply focused on the practical applications of a mindful life. Menial activities like household chores are the perfect subject for how mindfulness can transform tedium into meaningful existence. Interviewing medical professionals about the burgeoning research on how the brain waves associated with a meditative state benefit us would’ve also been hugely informative and influential. Yet this film insists on trotting out affluent people (in addition to the aforementioned, we get a congressman, a few authors, a sculptor and—to keep things authentic in purported simplicity—a Buddhist monk) displayed in the lotus position with their eyes closed in a way that feels, above all else, proselytizing.

That’s not to say On Meditation isn’t without its profound beauty. The brief documentary opens with The Paris Review co-founder and literary giant Peter Matthiessen (who died before the film’s release) providing the film’s most transcendent moments. The octogenarian writer explains how, the older he gets, the more he understands that human beings don’t actually acquire wisdom so much as they learn to get rid of the things holding them back. Esposito follows shortly thereafter and is incredibly interesting in his description of how his manifestation of one of television’s most brutally memorable villains was actually the result of a practice of loving-kindness. But as the film progresses, inspirational shot after inspirational shot, its message becomes less and less practical.

The world would certainly be a better place if more powerful people like Congressman Tim Ryan would implement a practice that makes them feel connected to the entirety of the universe. But simply showing the rich and famous (or at least incredibly fortunate and accomplished) proclaiming, after the fact, the importance of mediation feels trite—even without the references to the Aquarian Age, the Maharishi and expensive mantra factories. Mindfulness is simply too important to the average person to only be viewed through the lens of the elite.