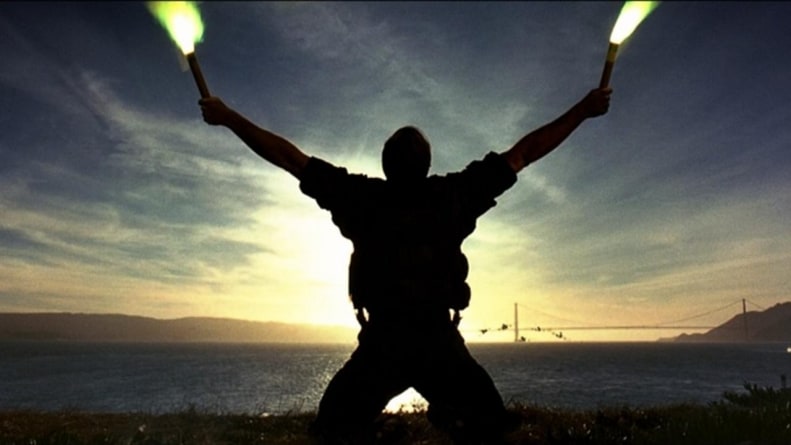 Even separated by two decades and the wisdom to know better, The Rock is still fiercely entertaining.

Twenty years ago the controversial artistic commodity currently known as “Bayhem” had yet to become hot button film crit jargon, but the beginnings of its trappings were on view in The Rock. After reinventing the buddy cop picture as a bombastic, longform music video in Bad Boys, perennial explosives enthusiast Michael Bay set his sights on this ridiculous heist/hostage thriller built on the kind of high concept premise that defined the ‘90s.

Legendary Vietnam war General Hummel (Ed Harris) and a cadre of his men steal biological weapons and hole up in Alcatraz with 81 hostages, threatening to lay waste to San Francisco unless the government pays out $100 million from a secret military slush fund to avenge marines slain on black ops missions. The only way to stop them is to break out John Mason (Sean Connery), a man who’s been imprisoned most of his life without having been convicted of a crime. He’s escaped The Rock before and is enlisted to help a task force infiltrate the structure. FBI chemical weapons specialist Stanley Goodspeed (Nicolas Cage) is stuck along for the ride; he’s just found out his girlfriend is pregnant, so the prospect of being trapped in this action movie hell hole is as terrifying for him as its plot machinations are ridiculous to us.

The Rock is the kind of movie Jerry Bruckheimer made a fortune making over and over, an over the top premise fighting its way out of a script that’s been passed around like a spliff at a Phish show, with a variety of big name scribes leaving the paper wet with their saliva. Between Aaron Sorkin, Jonathan Hensleigh, Quentin Tarantino and countless others, the finished product has its fair share of great dialogue, memorable characters and charm, but it’s sorely lacking in narrative cohesion. There are two different films vying for your attention, and with Bay’s abusive visuals, it’s hard for either to achieve real dominance.

On the one hand, Ed Harris is working his ass off to sell a credible ‘70s political thriller about the lives of soldiers as governmental pawns, but let’s face it, there’s no room between the car chases, shoot outs and Mexican stand-offs for the nuance that could pull off such thorny material. The curious chemistry between Mason and Goodspeed plays far more effectively. Goodspeed is about to start a family and Mason is a man who’s been robbed of that opportunity, rotting away in a cell. Once he’s outside, he tries to reconnect with his daughter Jade (Claire Forlani), a woman he’s never known because he was taken back to jail not long after conceiving her. When police cars surround him, and Jade is horrified that her estranged father has escaped prison again, Goodspeed intervenes and assures her he’s working with the good guys.

It’s a sweet moment anchored down by an execrable music cue. But it’s a testament to Cage’s peculiar performance acumen that we believe its sincerity. Stanley Goodspeed (God, that name) is one of the great Cage protagonists for the simple fact that he doesn’t belong here. The rest of the cast is a murderer’s row of masculine character actors, each more adept at sweaty growling and monosyllabic expression than the last. Guys like John Spencer, William Forsythe and Michael Biehn share screen time with David Morse, offering a kind of Wal-Mart Mamet-speak. \
Everyone either knows the game or is a besuited pretender. But Goodspeed isn’t really either. He’s incredibly gifted at dismantling biochem weapons but lacks the gun proficiency and stoicism to fit in with the other boys. When we meet him he’s feverishly opening a package at work: it’s a $600 Beatles record he had delivered to the office so his girlfriend wouldn’t judge the expenditure. Cage’s oddball delivery and manic screen presence are delightfully at odds with the testosterone roller coaster of the rest of the picture. Viewing the narrative from his perspective, the whole thing seems like Goodspeed’s fever dream, a desk jockey’s cartoon exaggeration of working in the field with real men.

Goodspeed refers to Hummel’s men as typifying “pubescent volatility” and it’s hard to find a better way to describe Bay’s style. The assuredness Bay frames his iconic imagery with today wasn’t there in The Rock. He hadn’t written the entire song yet, but the chords are there: the 360 degree camera spins and the breathless zooms have yet to coalesce into the familiar visual language he’s honed into a viable, vexing brand. Setting the brunt of the film’s action inside an impenetrable fortress fits Bay so perfectly it’s comical. The entry points read like “Star Trek” engine room booby traps for the propane set, to say nothing of Mason’s repeated MacGuyverisms.

That said, even separated by two decades and the wisdom to know better, The Rock is still fiercely entertaining. There are surely more hollow exercises in the Bruckheimer pantheon, even if this is a thin excuse to luxuriate in destruction and slicker than thou stylistics. If nothing else, it’s a telling precursor to Bay’s recent Benghazi thriller 13 Days, all before the irony set in for his defenders and it really was just about killing time on a summer afternoon—with the utmost professional execution. There’s something undeniably appealing about watching Looney Toons played out by exacting performers capable of keeping a straight face, no matter the onslaught of anvils raining down on their heads.