There’s a scene near the end of Paul Greengrass’s 2013 thriller Captain Phillips when the titular Phillips, played by Tom Hanks, is checked by medics following a near-death ordeal. As the medics work, Hanks’ face, vacant and agreeable, slowly folds in on itself. Tears erupt from his eyes and appear to surprise him as much as they do the audience. As they tell him that he’s safe, Hanks’ character, who up until this point in the film has been stoic, brave and calm, curls up and weeps like a child. The result is a gut-punch of cathartic relief that surely elicits tears from even the most stonehearted of viewers.

When Tom Hanks cries, it’s like watching your father, your brother or maybe your favorite uncle cry. He feels familiar, like a member of the family or a lifelong friend. Through him, audiences have fought in Vietnam and World War II, they’ve fallen in love with Meg Ryan on three separate occasions, they’ve been best friends with a volleyball, and they’ve saved a spacecraft with a sock. It’s this ability to make audiences feel like they know him, whether it’s with a knowing look, a smile or a tear, that makes Tom Hanks one of the best actors of all time. 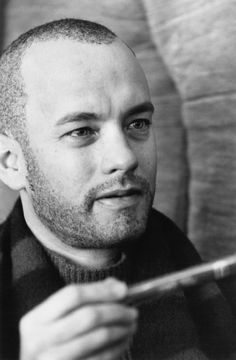 Just as Hanks’ success has been dependent on his incredible ability to engender familiarity with audiences, it’s been his habit to consistently collaborating with a few trusted filmmakers that has given him some of the meatiest leading roles in history. Robert Zemeckis, Steven Spielberg, Nora Ephron, Ron Howard and Penny Marshall are among those Hanks has worked with multiple times, collaborations that have netted him five Best Actor Oscar nominations (including two wins), a plethora of box office hits and the hearts of audiences worldwide.

Though a number of elements outside of talent seem to go into Academy Award-winning success, it must be mentioned that those two Best Actor Oscars (for his performances in Philadelphia and Forrest Gump) gave Hanks back-to-back wins, something that only four other performers have ever accomplished.

Now, in the latter half of his career’s fourth decade, Hanks’ acting life has been spent alternating between stints as Robert Langdon in Ron Howard’s adaptations of Dan Brown’s adventure novels and playing real-life characters like Charlie Wilson in Charlie Wilson’s War, Richard Phillips in Captain Phillips, Walt Disney in Saving Mr. Banks, James B. Donovan in Bridge of Spies and Chesley ‘Sully’ Sullenberger in Clint Eastwood’s upcoming Sully.

Though seeing him in less creative roles than Forrest Gump or Cast Away’s Chuck Noland is disappointing, it’s a tribute to Hanks’ continued success that these roles have been entrusted to him. These characters are among our most sacred: Walt Disney is an international symbol of joy; Sully is one of the few beacons of hope to emerge from the 24-hour, social media driven news cycle; and Dan Brown’s Robert Langdon is second only to Harry Potter on the list of bestselling book characters of the last 20 years. The world trusts Hanks to deliver these characters to the big screen because he’s done well by us so many times before. – Mike McClelland