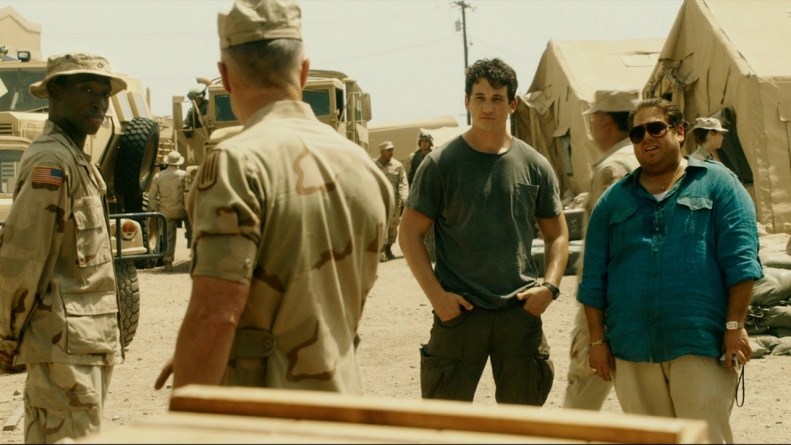 War Dogs isn’t as informative about systemic failures as was The Big Short.

Last year, comedy writer/director Adam McKay released an irreverent take on a serious, complicated issue. Now, it’s Todd Phillips’ turn. With The Big Short, McKay would make an accessible, educational (if perhaps watered-down) and undeniably hip film about the 2008 financial crisis, and he would go on to snag a bunch of Oscar noms and a win for adapted screenplay. Not too shabby for a guy previously best known for goofing around with Will Ferrell. The Hangover trilogy’s Phillips also pulls the co-writer/director double duty with War Dogs, a film about the cutthroat business of Bush-era “War on Terror” arms dealing. With another star-studded cast, this film is comparable to The Big Short in its appeal, but with a little less meat for financial wonks and a little more weed.

Based on the true story of the upstart arms dealers David Packouz (Miles Teller) and Efraim Diveroli (Jonah Hill)—who finagled their way into scoring a $300 million contract to supply the U.S. government with assault rifle ammo—War Dogs presents itself as a dark comedy. Hill is crucial in making this work. As chameleonic wild-card Efraim, Hill brings an unhinged enthusiasm to the role, complemented keenly by Teller’s pragmatic straight man.

Like The Big Short, War Dogs quickly sets up the kind of drudgery that must be transcended by our protagonists in order for them to become insanely wealthy through slick moves of questionable legality. In this case, the vocational hell David finds himself in isn’t boring old bonds, it’s massage therapy. Poor guy makes a measly $75/hour massaging rich, white flesh in Miami’s oceanside mansions. When he discovers that his former best friend from high school has moved back from L.A., David is entranced by Efraim’s style and swagger. When some supposed weed dealers bilk them out of $300 and threaten them with a concealed pistol, Efraim calmly walks to the trunk of his car, pulls out an assault rifle and pops off a few shots into the air to prove whose balls are bigger.

Soon, Efraim saves David from massage therapy and partners up with him in a fledgling arms dealer business. The two take advantage of a mid-2000s program that allowed small businesses to bid on government weapons contracts. Efraim and David scoop up the lucrative crumbs that the major dealers don’t bother with. As things go awry for these small potatoes, they actually find themselves in warzones in Iraq to follow through on contracts. And as they pull through more or less unscathed, and the money keeps rolling in, they start swinging for the fences.

Much like The Big Short and The Wolf of Wall Street before that, there’s a madcap appeal to bros making huge stacks of cash by burning the midnight oil, exploiting loopholes and pulling wool over eyes. All the better if they’re fueled by lines of blow and a strip club or two. For an element of menace, Bradley Cooper turns in a limited but memorable performance as an unnerving arms-dealing heavy. To add a more human angle, David has a significant other, Iz (Ana de Armas), who’s mostly around to smile prettily and then get mad when he lies to her about what he does for a living. Later, she has a baby. The story is so completely about Efraim and David that everything involving Iz feels forced, and it doesn’t so much add heart as it does cookie-cutter melodrama.

There’s not much here we haven’t seen before, but Hill and Teller make War Dogs compelling to the point where it’s clear the originally planned duo of Jesse Eisenberg and Shia LaBeouf would’ve likely been a disaster. We didn’t really need another movie about Bush-era shenanigans that made some hot shots rich, and War Dogs isn’t as informative about systemic failures as was The Big Short. But screw it, Phillips flashes some chops outside of his usual comedic wheelhouse, and the film is worth a watch for Hill’s wacky performance alone.