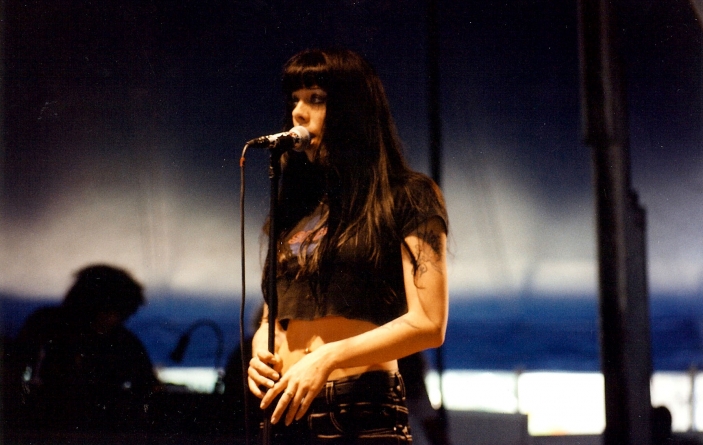 Bikini Kill not only helped start the riot grrrl movement but created some incredible songs with feminist messages while doing so. “Rebel Girl” sets itself up to be another song about girl-hate by talking up a girl who thinks she’s “the queen of the neighborhood.” Instead of trashing the girl, Kathleen Hanna instead backs up her claims and sings about wanting to be her best friend. Girl power to the max.

“Secretly,” the signature song of underrated British band Skunk Anansie, is one of the best odes to romantic cowardice ever written. Part of what makes it so effective is that its anger pretends to be directed outward—at the friend whom singer Skin secretly lusts for—but is actually directed inward, towards her own unwillingness to make a move. Skin is bisexual, and a queer reading of this song isn’t hard either: anyone who’s into the same sex knows the confusion and indecision of lusting after a straight friend who will probably never reciprocate.

Never as popular as its album companion “Lovefool,” the opening track and final single from First Band on the Moon drops any semblance of overt substance coasting by on a breeze of whimsical, sweetly sardonic lovesickness. Opening with the sounds of a cuckoo clock, the track keeps time via a steady drumbeat underscored by handclaps, further accented with flashy guitar licks, orchestral flourishes and a few fanciful jazz flute trills. The presentation is, to put it plainly, corny as hell, but the result is pure birdsong.

“America says I should be proud…/ Ugh! Shove!” retches Suzi Gardner on the great riot grrrl band L7’s alternative national anthem for the shit-upon. It’s punk rock, so a lot of the things she rebels against here are pretty arbitrary, but as the song progresses it’s more obvious she’s not just railing about some “Summertime Blues” bullshit but the tribulations of living as a woman under a capitalist society. By the time some “drunken bum” pinches her ass in verse three, she sounds like she’s ready to armor up a bulldozer and plow right into a government building.

“Not Too Soon” appeared as a single off The Real Ramona, the last album Throwing Muses released before Tanya Donelly left to form Belly. The album has more of a pop influence than much of the band’s earlier albums, but it’s the contrast between the poppier sound and Donelly’s surrealist brand of songwriting that makes “Not Too Soon” a standout within Throwing Muses’ discography. It’s fun and upbeat with vastly contradicting lyrics that lead to an enjoyable albeit vaguely confusing listening experience.

Cibo Matto’s Viva! La Woman is one of the strangest and flat-out funniest albums of the 1990s, and the cacophonous “Birthday Cake” epitomizes all its best qualities: post-everything production, a surreal and sometimes nasty sense of humor, an inexplicable obsession with food. The plot: Mom’s cooking dinner for her grownup son. The food’s inedible, but singer Miho Hatori won’t have any complaints—this is “it’s the thought that counts” taken to the extreme.

Only in the 1990s could Virgin Records sign an impromptu band of Swedish television personalities, release a single whose chorus is built around a word that doesn’t even exist (eat your heart out, French Montana) and then get the damn thing to land at No. 24 on Billboard’s Modern Rock chart. It’s not quite hit material, but metal-mouthed singer Cia Berg luckily has the perfect, shrill, reggae-type voice for Whale’s brand of dubby brat-punk. Whale and their (surprisingly solid) album We Care are barely remembered today, which is a shame—this truly is one of the strangest of all ‘90s bands.

I was first introduced to this song (and the band behind it) via a CD mixtape made by a girl I was sort of dating during the winter of 2001, a time when burned discs functioned as a special form of currency, ideal trinkets for a sub-generation for whom mixtaping was more of a casual affectation than a practical necessity. Relatively easy mp3 transfers may have been available, but the concept of curated physical media had a residual magic that cold, impersonal files couldn’t match, and was the best method for revealing music either slightly before the recipient’s time or outside of their usual purview, the totemic significance of the marker-scrawled disc commanding that extra bit of attention. It’s for these reasons I still associate this track with the decade before its 2000 release, an easy mistake considering its mid ‘90s-style blending of menace and simplicity, crude nursery rhyme lyrics weaponized by a taut mixture of razor-edged aggression and saccharine sweetness.

Jacking the guitar riff from Wire’s “Three Girl Rhumba,” (a theft the band later paid for in an out-of-court settlement), “Connection” nonetheless nails a certain early ‘90s sound, redolent of punk in approach and attitude, if not necessarily in form. Where the original song is stripped down to the point of austerity, revolving around the riff in 83 seconds of sinewy bristle, this update instead takes a maximal approach. Synthesizing the core groove down to an electronically modified snarl, it piles on other bells and whistles, not least of them Justine Frischmann’s brusque, snotty vocal, which completes this coarse portrait of disinterested angst.

I bought Emperor Tomato Ketchup on a whim from a secondhand music store, popping the disc immediately into my car’s CD player, a ritual I’ve missed in the years since I’ve become entirely subway-dependent. Album opener “Metronomic Underground” immediately asserts itself as ideal driving music, a chugging eight-minute jam that gradually piles one element atop another, but things really lock in with second track “Cybele’s Reverie.” Here the crisp violin intro swirls around a cascading conglomeration of French lyrics, racing drums and trilling organ, a mesmeric maelstrom that sums up Stereolab’s essentially exploratory chillness, constructing catchy, fundamentally wordless music through the sheer power of their combined musical ingenuity.

Oh, ska punk. The often forgotten genre hit its peak in the ’90s when bands like No Doubt and Sublime leaned on it heavily, but Save Ferris’ performance of this song in 10 Things I Hate About You tops them all. Frontwoman Monique Powell jaunts across the stage while teens in crop top prom dresses shimmy to the sound of trumpets and it is beautiful indeed.

Skunk Anansie’s Skin was the ultimate ’90s frontwoman. Between her shaved head, love for black latex straightjackets and those raspy vocals, Skin is truly badass. “Charity”‘s simple, yet assertive lyrics about refusing to be pitied paired with a music video filled with grungy effects and slightly disturbing images of Skin and the rest of the band makes it the quintessential Skunk Anansie track.