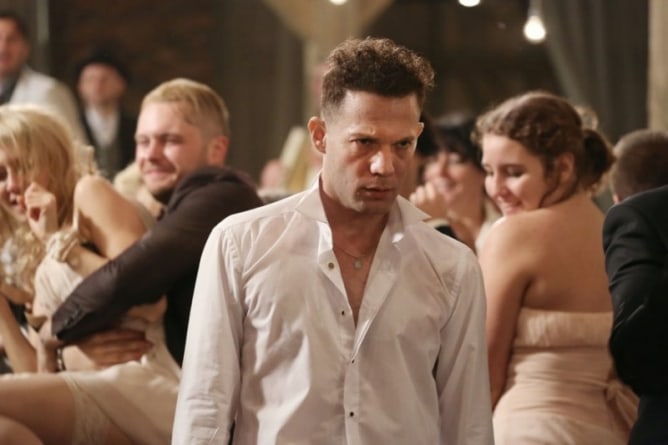 Demon feels like a funeral party that has stretched on for three generations.

A funereal pall hangs over Demon, not only for its ghostly subject matter but for the haunting history that will forever shroud the film. A few days after Demon opened to great press at the Toronto International Film Festival last fall, Polish director Marcin Wrona hung himself in a Gdynia hotel. In a development that eerily ties into the film’s premise, a man possessed by a dybbuk (Jewish spirit) at his wedding, Wrona’s body was found by his new wife. Sadly, this tragedy cuts short the career of what could have been the most distinctive directorial voice to emerge from Poland in many years.

Speaking of Polish film history, both the claustrophobic terror of Roman Polanski and the horror-by-way-of-comedy of early Milos Forman transmit via Demon, easily one of the best horror movies of recent memory. Both men have turned a sharp eye to the death of the soul and the crushing legacy of the Holocaust in their films. Wrona also explores the notion that the past cannot stay buried forever.

The movie opens as Piotr (Itay Tiran) returns to his native Poland after a stint living in the United Kingdom to marry Zaneta (Agnieszka Zulewska), the sister of a friend who he has known for only a short time. Although Zaneta’s parents are against the match, Piotr tries to work his way into their good graces by restoring the house of Zaneta’s grandfather. Once it’s fixed up, he and Zaneta plan to move in. Ill omens meet Piotr as soon as the movie begins. While working on the house, he unearths a skeleton. A ghostly woman dogs his every step. By the time the wedding begins the next day, it’s clear that something terrible has happened to Piotr.

Wrona’s depiction of a wedding is the best since Jonathan Demme’s Rachel Getting Married and ranks up there with the opening sequence in Michael Cimino’s The Deer Hunter. Filling the majority of the film’s runtime, Wrona depicts the wedding in a series of whirlwind scenes, clearly conveying the madness of a Polish reception. In a way these scenes echo the controlled madness of Forman’s The Fireman’s Ball. Wrona fills his film with comedic elements and drunken hijinks, but all the while something horrible brews beneath the surface. As Piotr’s behavior becomes increasingly bizarre—bleeding from the nose, seizures, screaming in Yiddish—Zaneta’s family assuage the concered guests that he is suffering from epilepsy and plies them with more vodka, encouraging them to ignore the horror taking place right under their noses.

Demon isn’t the type of movie that startles you with jump scares. In fact, there really isn’t anything scary that happens in the movie that we haven’t seen before. If you are looking for movie about possession that will give you nightmares, go rent The Exorcist. Instead, Demon hits home in the same way something like Shoah terrifies, that even years later we cannot outrun the reach of the Holocaust and its multifarious transgressions against humanity. Wrona uses the wedding, and the subsequent refusal by the guests to acknowledge this Jewish ghost, as a continuation of the sins of the past. As the film progresses, Wrona shows us all the places that used to be owned by Jews, but no longer exist. In many ways, the people in Demon are living in a ghost world and refuse to recognize it.

The film may stumble with its ambiguous final moments, especially in a Kubrick-biting image that feels out of place. Rather than emulate the tropes of a joyous wedding, Demon feels like a funeral party that has stretched on for three generations. You can outrun the past for only so long, but skeletons and ghosts find a way of tapping you on the shoulder with bony fingers.