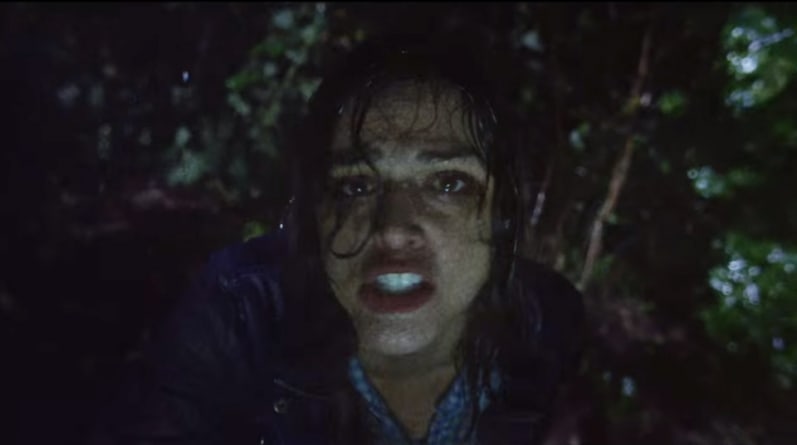 Hyper-stylized to a fault, testing the viewer’s endurance for being thrashed by an abrasive sensory onslaught.

How do you create The Blair Witch Project 2.0? Start by ignoring the woeful 2000 Book of Shadows sequel, and then proceed to upgrade the technology. Blair Witch arrives full of hi-tech gadgets that nevertheless add plenty of digital distortion to the nausea-inducing shaky-cam of the iconic 1999 original. In addition to providing new camera angles, this slavish sequel also doubles the number of would-be documentarians who hike into the malevolent vortex of the Black Hills Forest, as six intrepid young people decide to follow the footsteps of the doomed filmmaking trio whose found footage started it all. When equipped with earpiece cameras, GPS and a drone, there’s no danger of getting lost due to someone kicking a map into the river, right?

Filmed for $5 million—which is a fortune compared to the original’s shoestring budget but is still a very small investment by Hollywood standards—Blair Witch is helmed by Adam Wingard and written by Simon Barrett, frequent collaborators who brought us the darkly comedic home-invasion slasher horror You’re Next. Their latest horror film, however, remains self-serious in tone and entirely bleak.

Following the obligatory title card claiming the film’s authenticity, we’re introduced to James (James Allen McCune), the younger brother of Heather, the film student whose drippy nose stole the show last time. Prompted by a YouTube clip purporting to show a mysterious reflection of a woman in a cabin near where Heather disappeared, James convinces film-student friend Lisa (Callie Hernandez) and two other pals to join him in hopes of tracking down his long-lost sister. They party together, setting the tone with creepy-sounding technological glitches and faux jump-scares even in an exuberant club setting. Soon, they meet up with Burkittsville townies Lane (Wes Robinson) and Talia (Valorie Curry) and traipse into the woods, from which we know—based on the conceit of the found footage subgenre established by its predecessor— they will never return.

Just like the original, things soon start going south. Ashley (Corbin Reid) cuts her foot while crossing a creek, and when Peter (Brandon Scott) later changes her bandage, there appears to be something sinister about the wound. The overzealous Lane and Talia are guilty of some red herrings and have a falling out with the rest of the group. Time starts getting shifty. And then, of course, there are the unholy noises coming from the oppressive dark of night.

Blair Witch follows virtually the same beats as its forebear but with far less verve, ramping up the visual and aural chaos until it assails the viewer. Wingard and Barrett add precious little to the Blair Witch mythology, essentially just rehashing the legend and throwing in a few hollow twists. We get some unexplained body horror, as well as the witch’s ability to bend time and space (though the perpetual night that befalls the campers has already been done in the 2014 found footage flick Mr. Jones). This time around, the witch sounds massive in the forest, like these doomed kids have walked into a scene from Trollhunter. And while this sequel stretches out the final climax within the witch’s claustrophobic lair, it does nothing to provide any closure.

Seventeen years later, The Blair Witch Project remains so effective in blurring the line between fiction and reality because its three principal actors really were left to film themselves wandering in the woods while enduring creepy nighttime disturbances enacted by the filmmakers. Blair Witch, on the other hand, is hyper-stylized to a fault, testing the viewer’s endurance for being thrashed by an abrasive sensory onslaught, all while being told a story we’ve already heard.