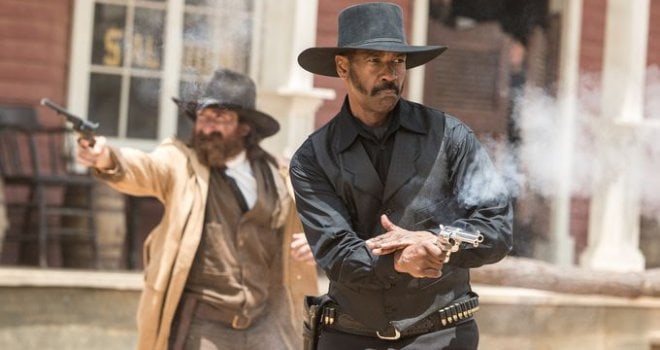 The Magnificent Seven barely lives up to the 1960 film, let alone The Seven Samurai before it.

The summer movie slate has turned into a relentless parade of regurgitated IP, but this fact becomes less depressing after a sober rejiggering of one’s expectations. As a filmgoer, if you go into a remake, reimagining or reboot of a known piece of popular culture, you need only isolate what specific entertainment element you require from the proceedings. For instance, if originality, deft storytelling and inventive visuals are your thing, you can wholesale avoid most flicks destined for the multiplex. If, however, you just like seeing bad people get shot mercilessly by good people whose sole purpose is to look cool while carrying out said violence, then look no further. The Magnificent Seven has you covered.

There’s nothing in this film that is a surprise. All the right beats get hit, there’s a satisfying conclusion and, along the way, the otherwise uninspired script from True Detective creator Nic Pizzolatto and Richard Wenk provides a fair amount of crowd pleasing moments. In interviews, director Antoine Fuqua has said the diversity in the cast is meant to evoke the real, untold history of the American West, which was a more varied, colorful landscape than much of the genre has presented. But the racial make-up of the cast is maybe the only element that feels remotely realistic. The film’s backdrop is paint-by-numbers western aesthetics but with a setting lacking in texture and sweeping vistas devoid of grandeur. It doesn’t help that characters have the kind of ridiculous names that might make Pacific Rim blush.

But this isn’t a movie that would really be improved by liberal applications of realism. It’s a showcase for the charm of its principal cast and the stirring, second hand thrills of watching unlikable people get riddled with bullets. Washington and Pratt ably buoy the film with their complimentary screen presences, with Washington’s Chisolm one of the coolest cucumbers in the thespian’s long history of cool side of the pillow theatrics. Pratt struggles at first to balance his natural state as the comic relief with his newfound leading man charisma, but once he hits his stride, he’s an absolute delight. Hawke probably gives the best performance, freed up to wild out in a supporting role, but D’Onofrio does perhaps the most with the least to work with, chewing on his tiny morsel of scenery with glee.

Unsurprisingly, the other three stars of color are given little more to do than exist without white skin, though Byung-hun continues to stand out in action movies that don’t deserve his involvement. Billy Rocks isn’t quite as immediately iconic as his Storm Shadow in the G.I. Joe films, but the role does offer him the opportunity to flesh out his comic timing more. Also, his chemistry with Hawke is off the charts. It’s a shame there’ll never be a spin-off exploring their curious friendship.

The film’s best moments all work better in micro as little slices of pop cinema, with exterior threats set up as cowardly brigands just waiting to meet their righteous end at the hands of our clever heroes. It gets the macho Americana element of the western right, but fails to color it with anything deeper or more emotionally resonant. In a tighter film, this wouldn’t be a problem, as the flashes of violence are so indelibly executed as to completely block out the film’s more clunky attempts at melodrama. Gunshots ring out with such sudden cacophony, giving the action an impactful dimension few other shootout-centric movies ever attain.

But it’s all the tiresome moments between the violence and the one-liners that really drag, where Fuqua insists on framing every scene of dialogue with enough coverage to kill anyone’s ability to adequately focus. It’s such an abrasive visual language, interrupting the usual understanding of scene geography to hop scotch perspectives and sight lines in an especially off-putting manner. This cloying predilection begins to dissipate by the time the final showdown is at hand, as that climactic set piece is some of the most coherent and engrossing action of Fuqua’s career. It’s just a shame that even those thrilling heights feel hollow, perfunctory manifestations of our collective blood lust writ large on the screen.

The Magnificent Seven barely lives up to the 1960 film, let alone The Seven Samurai before it. But it remains an innocuous way to kill two hours, relishing in the charm of its performers and the adoration of western tropes and trappings. It might even enjoy a healthier half-life on home video, where it’s much easier to nip off to the kitchen for a snack during the dead air between high spots.