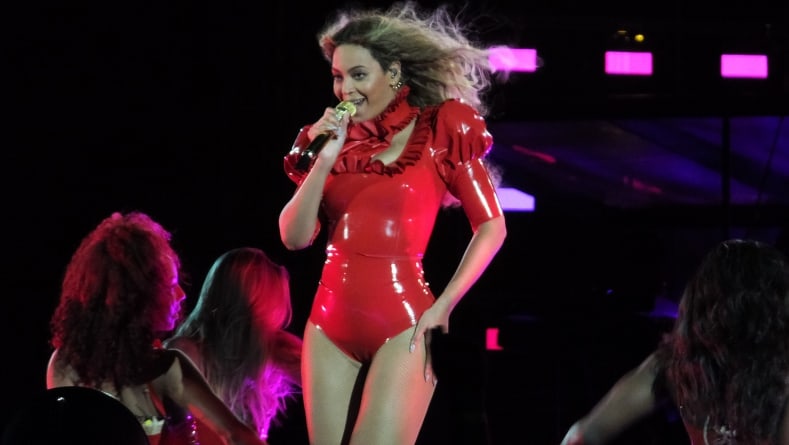 The Queen is still reveling in her powers—and slaying into the future.

To see Beyoncé staccato-stride onto a Houston stage is almost to be a fly on a marble pillar when Cleopatra roamed the streets of Alexandria. Queen Bey’s regality was infused with a hint of soft playfulness reserved for the hometown homies. Houston’s humidity wasn’t just thick but seemed anticipatory, like the city itself was gearing up for the lush vitality of its homegrown superstar.

I expected all the pomp and circumstance. Spectators are an indelible part of the entire Beyoncé spectacle. In some instances, message outperformed packaging. Denim vests displayed the Queen’s image with the “I Slay” declaration captioned underneath. Advertisements for her new athletic line, Parkwood, were looped and cross-faded into video shorts that portrayed Bey’s humanitarian efforts with Global Citizen and their fight to educate and empower young women of color. The constant dynamic between commercialism and social criticism —once serving as a source of tension between Beyoncé the artist and Beyoncé the persona—collapsed upon one another last April with the release of the intimate and sprawling Lemonade. And with it, the notion of the artist contradicting or confusing herself with all the personas is moot. It took time and hardship, but at 35, Beyoncé is defiantly herself, and all of it—the commercial ads, the new lines, the choreography, the middle fingers and gold fangs, the heartbroken mess—is fully hers.

In Houston, a one-two combo of “Formation” and “Sorry” opened the show with a palpitating kinesis. The focus was clear; we were there to get gully with the queen. The rotating 60-ft. LED screen towered over the formal staging acts as both projection mirror and storage for quick side-acts. The secondary stage, a runway equipped with a treadmill, split the crowd down the middle and would eventually house gallons of water for a now famous “Freedom” routine. There was a lot going on. But there was no remorse for losing oneself.

What Beyoncé’s more recent foray into her intimate life showed her audience is their similarity with her. Of course, she’s special, but so are they. Beginning her concert with the declarative (and very gay and black) mantra “I Slay” is less about the audience—mostly made of women of color, black gays and general stans (me)—feeding off her power than proclaiming their own.

Perhaps that’s what the Formation World Tour is alluding to. That though women have grown used to being disassembled and diminished, they are as complete as the society around them is disheveled. Change, for and from women, then, just takes formatting. In one of the many instances in which I felt like an observer—and supporter!—more than a participant, Bey reminded her audience, “The most important relationship you have is the one with yourself. Everybody else is just bonus.” It’s a revolutionary thought, in a country that still tends to ascribe value to women based on their relations and proximity to men. “Ain’t no such thing as a weak woman,” she quips before barreling into a stripped down version of “Me, Myself and I.” Beyoncé guided us in fellowship, pacing her performances until lighting the NRG Stadium on fire for “Don’t Hurt Yourself.”

With the rural Southern bounce filling the arena, Queen Bey then took us through her fantasies. Signaling the shift with a doozy of a mix between Vic Mensa’s “U Mad” and her record “Ring the Alarm,” Beyoncé, in her Swarovski-studded leotard went from loud flower-power insurrection to the clever, sexy flex of “Feeling Myself.” These songs, especially from her two most recent albums, are feminist master classes on self-satisfaction and substantiation. Though some of her critics pelt ‘Yonce with the “hypersexual” tag, it hardly reads like that on stage. No, this is a free, complete, grown woman showcasing a fondness for herself that only spills over into her sexual being. As sizzling as she was during the bump ‘n grind of “Rocket,” her motions were silky.

Following the playfulness of “Love on Top”—in which she injected vocal hitches and stutters to make it utterly un-duet-able—Beyoncé took us back through love with “1+1.” The show closed with a chimeric performance of “Halo,” where the superstar’s voice was literal perfection. Her controlled breathing and loose gospel runs lifted us into auditory ecstasy. We sang along in hushed tones. This was the last we’d see of her until next time. With such command of the stage, nearly two decades worth of material to pull from and an irrefutable understanding of not just herself but her audience as well, the Queen is still reveling in her powers—and slaying into the future.

Tirhakah Love is a writer, DJ, podcaster, artist and a native of Houston, TX. He writes real because he speaks real. He also tweets (real) therapeutic things for all his favorite goons at goontherapy.