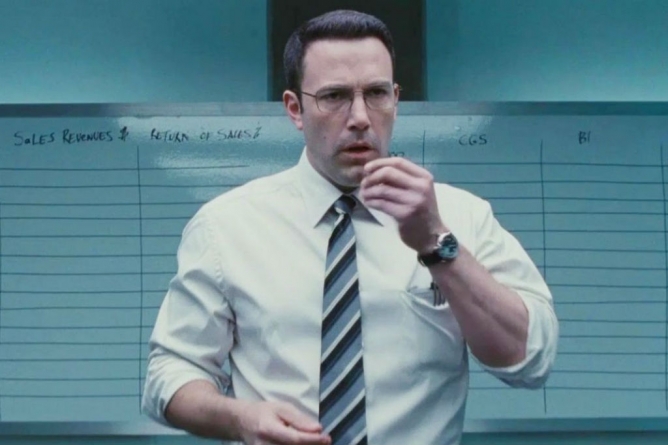 The Accountant is a solid piece of entertainment, if you take it at face value.

The premise sounds awful. An autistic accountant who is trained as an assassin? What the hell? Yet, director Gavin O’Connor managed to take this crazy notion and a somewhat hackneyed script and make it into a solid action movie with a warming message. Whether or not you buy into it all is how successful The Accountant will play for you.

Ben Affleck stars as Christian Wolff, the film’s title character who has been dealing with autism his entire life. Like many people on the spectrum, Christian struggles with social interactions – unable to read cues and understand emotions. As a child, Christian was obsessed with completing puzzles, prone to violent outbursts if something impeded him. His father, a military man, saw the world as a difficult place. Rather than coddle his son, he taught him to fight.

O’Connor is more or less creating a superhero movie with the The Accountant. Christian appears mild-mannered, if somewhat awkward, to his clients, but if someone crosses him, watch out. He’s like a cross between Will Hunting and Bruce Wayne, a brooding mathematical genius who just happens to know how to beat the living shit out of bad guys. The Accountant takes its time for the action to start, after an albeit violent prologue, but when it does we learn that Christian is a force to be reckoned with.

Wolff’s carefully constructed world is thrown into chaos when he is hired to investigate an accounting error at a robotics company headed by John Lithgow. Someone has been stealing from the company, and Christian is brought in to find the culprit. There he meets Dana Cummings (Anna Kendrick), the company’s bookkeeper who discovered the breach. Though she has a relatively small part, Kendrick brings a much-needed levity to the film as a potential love interest for a man who struggles to even have friends.

The breach at the robotics company isn’t the only thing Christian needs to worry about. Two agents at the Treasury Department, played by JK Simmons and Cynthia Addai-Robinson, are after him for a massacre that took place a few years earlier that wiped out about 10 members of a crime family. Simmons and Addai-Robinson aren’t given much to do in the first half of the film, and an extended monologue/flashback featuring the pair slows things down near the end. This burst of exposition, though necessary to the story, could have been handled in a more exciting way. Throw in a twist that any intelligent moviegoer will predict an hour before it’s finally revealed and you have some pretty bad decisions here.

Yet, The Accountant is a solid piece of entertainment, if you take it at face value. The movie feels like an origin story, the beginning of a saga or trilogy. It is good to see autistic folks getting their due at the multiplex, but why not in normal fare rather than a superhero type of thing? The Accountant wants us to believe that being different is being less than normal. Sadly, its hero is something more than normal, going against the very message the makers of The Accountant want us to walk away with.