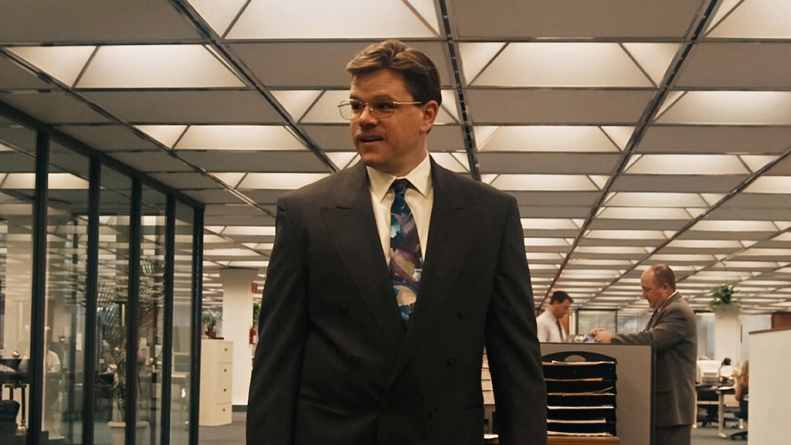 Remains a powerful showcase of the ability of absurdist humor to stealthily appall the audience.

Steven Soderbergh is no stranger to the docudrama. But while the likes of Erin Brockovich and Traffic erred more so on the side of drama with serious discussions of the social issues at hand, The Informant! is just as cheeky as that exclamation mark would have you believe. Whether it’s the completely useless voiceover narration or the laughable portrayal of FBI information gathering, it is one of the most inherently humorous biographical films. Certainly, Soderbergh had done comedy before The Informant! and had done ensemble comedy, but this is perhaps his most unique effort, and also one of his most underappreciated.

Make no mistake, the subject matter is serious. Mark Whitacre (Matt Damon) is a vice-president at Archer Daniels Midland (ADM), a company that produces many of the unpronounceable ingredients in everyday foods. And they are engaging in international price-fixing with their competitors, reaping all the gains and pushing the burden of artificially high prices onto consumers. But, as Soderbergh has framed it, the focus is on Whitacre rather than the price-fixing he is trying to unveil as a whistle-blower under FBI agents Shepard (Scott Bakula) and Herndon (Joel McHale). After all, the more interesting question is why such a high profile member of management who benefits so much from the scheme (he has sports cars spilling out of his garage) would want to put an end to it. Whitacre’s narration, though, gives us no insight into his motivations.

Soderbergh’s interest in the story was piqued by Kurt Eichenwald’s book and its cinematic structure that reveals key information piecemeal, and that carries over to Scott Burns’ script. In fact, The Informant! is a fascinating example of the unreliable narrator in film, except Whitacre is less unreliable and more unhinged. The film opens with Whitacre speaking reverentially about corn and how its various syrups and starches can flesh out any food product, his voice sounding downright gleeful. But all Whitacre’s narration does is reveal the random and innocuous thoughts flowing through his head, like when he fondly imagines referring to Agent Shepard as Brian, or even Bri, since they’re such good friends now. It’s charming, in the same way that idiocy is kind of cute. Whitacre truly seems like a dunce, and that should make us indignant that he holds such a vital role in this world of corporate corruption.

If the social issues inherent in the story seem overshadowed by Whitacre’s antics, the very absurdism behind this character provides the commentary on corporate corruption. Here you have a man who claims that he wants to be a real life white knight and “do the right thing,” all the while embezzling money for his own gain; he claims it was his severance package at one point, what would keep him afloat when the company imploded. Given the first person narration that guides the story, the fact that the audience doesn’t know this is happening until the final act almost makes it seem like Whitacre wasn’t even aware of his own actions. The contradiction alone of the jovial do-gooder and the stereotypical greedy corporate head is reeling. Add in Whitacre’s sociopathic traits – like telling people he’s adopted so that they will treat him better – and his inscrutable character becomes terrifying rather than hilarious. And that’s not even mentioning the ineptitude of the FBI investigation and the legal fallout after the raid on ADM.

Where Erin Brockovich soaked its social issues in Oscar bait and Che made them the epic fulcrum of a legacy, The Informant! highlights injustice through the absurdity of its characters and situations. Price-fixing, fraud and embezzling should not have been this easy for people who were so blatant in their exploitation. At every turn, both the audience and the supporting characters in The Informant! are in a state of disbelief. Tony Hale’s dismayed expressions surpass all others here. But Soderbergh masterfully walks a line of mocking Whitacre and cleverly exposing the simplicity at the heart of many white-collar crimes. Tackling an expose on corruption in such a way, through the lens of human comedy, likely contributed to The Informant! being seen as a whacky effort overshadowed by much of Soderbergh’s existing oeuvre, but it remains a powerful showcase of the ability of absurdist humor to stealthily appall the audience.