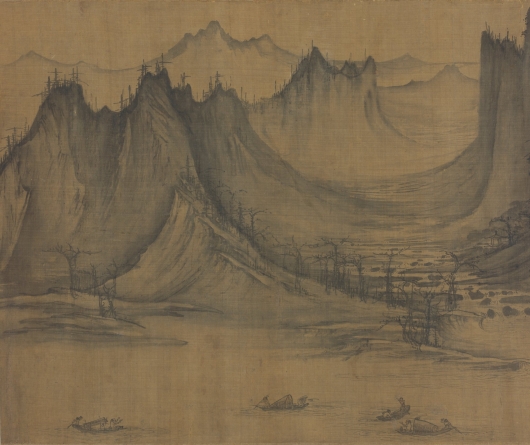 Evans found the Platonic ideal of the jazz piano trio with bassist Scott LaFaro and drummer Paul Motian. At the time of this 1959 recording, LaFaro’s untimely death was but two years away, lending this lightly swinging rendition of the jazz standard an autumnal air even though its players are in the prime of youth. Autumn is like that, the season cycle reminding us of impending mortality.

Plenty of indie rock groups aspire to autumnal and wintry tones, but Deerhunter, with their careful balance of depressive squalor and noisy energy, have always managed to perfectly capture Georgia falls, which are too hot for their own good while still cooling precipitously. Their 2007 EP companion to Cryptograms expands the LP’s somber drift around town by adding in jolts of punky energy, and the oddly childlike tone of the EP’s title track manages to sublimate that spirit into something eerie and foreboding. Winter isn’t here yet, but it is coming.

As a long-time Midtown office drone, I mark the seasons by the passage of the sun: the first sign of the end of summer comes when I need to start closing my windows blinds before lunch to keep from getting blinded by its gradual descent; the second, definitive one when entering the subway after work leads to exiting it in complete darkness. This gradual loss of warmth and light calls for morose commuting music, a favorite being this relic of Korea’s early ‘70s psych-folk scene; I initially marked it out as one of the most desolating things I’d ever heard, a sentiment somewhat softened once I learned it’s really a simple ballad about sitting in the sunshine. Written by Korean pop maestro Shin Jung-hyeon for his evocatively-voiced female muse, there’s something about the song’s gradual progression from apparent grief to effusive, shakily delivered joy that’s completely enrapturing, so much so that it’s protracted length (pretty much twice as long as it needs to be) doesn’t even matter.

Though his band’s early successes were proto-metal, Ray Davies hit his songwriting peak in the late ‘60s with modest character studies of what even then seemed a quaint old-fashioned England. This 1967 non-album 45 strikes an easygoing look at shorter days, a passing lament at “my poor rheumatic back Davies’ nod to the season’s decay. Yet as all the people I meet/ Seem to come from my street, the passing of time seems positively leisurely.

In my infallible “Seasonal Songs Index,” most Cohen songs are filed under Winter, marked by icily congealed bitterness, chilly lyrical rebukes and general gloom. This verges closer to autumn, the relationship detailed still alive enough to merit some emotion other than sardonic dismissal or wistful melancholy. Kicking off Cohen’s sleaziest album, the track proceeds from a baseline of horn croaks and swirling woodwinds towards a gauzy (if somewhat muted) Spectorian wall of sound, a sinister adult analogue to the producer’s stable of similarly downhearted, teen-oriented pocket symphonies.

Jazz saxophone seems like the perfect soundtrack to falling leaves. Lou Donaldson’s soulful alto puts you in a romantic mood to cuddle up to your loved one to fight the chill in the air. This ballad comes from Donaldson’s 1958 Blue Note album Blues Walk, considered his finest as a leader.

This 1957 recording is one of the more somber tracks on the otherwise bouncy travel-themed album Come Fly With Me. It’s the second time Sinatra recorded the Vernon Duke standard. While Old Blue Eyes is in peak voice, he lets his voice strain just a little, as if taking on the persona of the season of decay.

This breakout hit is summer romance cooling rapidly into dejection and a relationship in which the only thing shared is loneliness. Samuel Herring tears his heart out as he croons and moans in his rich baritone, pleading as much with himself as his partner. Backed by soaring but starkly digital synthesized chords, it’s one of the most rousing depressive songs ever made.

Drake’s lonesome analogy of fame as a tree that can’t flourish until its fruits have already fallen to the earth works as both an invocation of sorrow and a summation of the singer-songwriter’s all-too-brief career. This song is a perfect confluence of low-key instrumental simplicity and stripped-down, straightforward lyricism, soft horns and acoustic guitar blending together beneath Drake’s mellifluous voice. Despite its seemingly depressing content, the song is ultimately more about persistence than defeat, a perfect lyrical theme for a season whose mournful connotations are only one part of a cycle of renewal.

4. Sibylle Baier – “I Lost Something in the Hills”

Each fall I find myself returning to this album of dreamy pastoral folk, recorded by a German Wim Wenders associate in the early ‘70s and unreleased for over 30 years. Baier’s self-recorded songs are perfect twilight music, their hushed, dusky intimacy the ideal nighttime companion for warmer autumn songs like Kim Jung Mi’s sunshine ballad. Baier’s muted, somewhat husky voice, intoning over a repeating melody picked out on an acoustic guitar, sets a mood of bucolic loneliness, perfectly invoking the feelings of loss associated with this most melancholy of seasons.

Hip-hop always seems made for either summer anthems or wintry introspection, but the sleepy, sluggish tone of much of OutKast’s work has always split the difference. This ATLiens highlight, nominally a standard moving-on-up narrative of ascendant stars, swaps the typical braggadocio for something more relaxed. Even as the pair rap of showing off their new status, they mostly sound like they are talking to each other, letting some slack into their hustle now that they’ve made it.

Prince’s songs tend to be best suited for spring and summer, but this has a breeziness that’s perfect for fall. A laid-back love song, the track communicates a sense of contentment not often found in the artist’s most carnal, desirous work. Few of his songs are better made for a campfire sing-along.