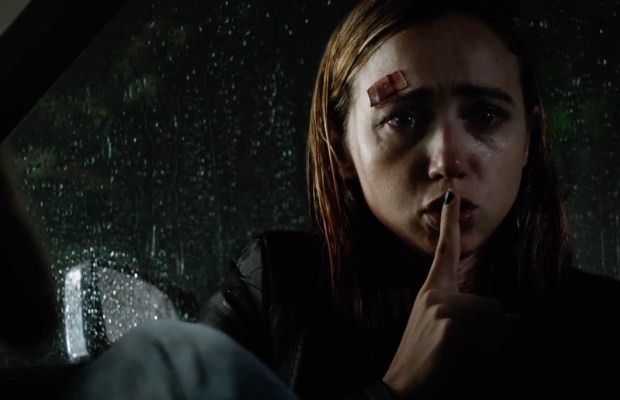 A stark reminder that the best horror doesn’t just scare us, it makes us feel something more.

Steeped in metaphor, The Monster takes a simple premise, adds ominous atmosphere and leans heavily on its two talented leads to create one of the more moving horror films in recent memory. Kathy (Zoe Kazan), a childish, alcoholic thirty-something, drives her frustrated, preadolescent daughter, Lizzy (Ella Ballentine), to the girl’s father—perhaps permanently. Lizzy’s at the end of her rope with her mother, who—hung-over again and wondering what happened to the random guy who’d passed out beside her—overslept and caused a late departure. As a result, they’re driving along an underused stretch of highway in the dead of night. When Kathy hits a wolf and wrecks her car, the two are stranded and soon discover that, symbolic as it may be to Kathy’s addiction, a real-life monster lurks in the forest shadows.

Director Bryan Bertino, who broke onto the scene with the 2008 home-invasion slasher flick The Strangers, sets up the addition of the monstrous element in such a way that, prior to the stranded mother and daughter duo pulling an enormous tooth out of the bloody wolf carcass, the audience may even forget they are watching a horror movie. There’s dramatic tragedy in Kathy’s relationship with her daughter, which throughout the film is revisited in unnerving flashbacks of the two yelling “Fuck you!” at each other or Kathy engaging in a episode of physical abuse. We also see Kathy’s alcoholism leading to tender moments, with Lizzy taking on the maternal role by compassionately holding her stricken mom who’s curled up half-naked beside the toilet.

When the monster fully emerges onto the screen, the film begins hitting the familiar creature-feature touchstones; the arrival of a tow truck and eventual ambulance end up supplying more meat for the beast and also potential modes of escape for the mother and daughter. But it’s the dynamic performances by Kazan and Ballentine, who are alone together for almost the entire film, that make this far more than just a typical monster movie. Their relationship, first depicted so caustically, morphs into one of tortured longing as the innate love for each other—buried for so long under abuse, addiction and neglect—begins to surface only as survival instinct kicks in and the chance of either one walking away from the wrecked car begins to dwindle.

The monster, which initially skulks and growls just off-screen, gets the full treatment by the film’s third act. Designed well enough on the film’s small budget to be effective, if not exactly frightening, the creature embodies the horror of ravenous addiction, and its presence isn’t solely as a scary adversary so much as the catalyst for an intensely dramatic dynamic between a mother and daughter who, deep down, share a desperate love, even if they’ve never much liked each other. Simply and directly told along a dark stretch of rain-soaked road where a sinister entity stalks in the shadows, The Monster serves as a stark reminder that the best horror doesn’t just scare us, it makes us feel something more.