When I lived in Japan between 1999 and 2000, my girlfriend at the time expressed disappointment at the country’s embrace of modernity. Maybe she had a fetishistic notion, but she mourned what seemed to be a repudiation of centuries of beauty and tradition. In its stead came garish Pachinko parlors, unimaginative architecture and Oreo cookies that came individually wrapped in plastic. In order to escape, we took an excursion to Kinkasan Island, in the Miyagi Prefecture. There, we stayed at a temple, enjoying the slower pace of life and the escape from modernism’s shackles. Was this the true Japan or an iconoclastic daydream?

Kaneto Shindo’s The Naked Island (1960) explores this same conundrum, a snapshot of old Japan trying to survive in a post-world epoch that is only facing forward. The opening shot is an aerial view of a lonely island off Hiroshima. As Shindo’s camera moves closer, we meet the sole family who lives there, subsiding in a hardscrabble existence. Life is a Sisyphean routine as the husband and wife travel by boat to the mainland to obtain fresh water multiple times a day to keep their crops alive. In minute detail, Shindo spends the entirety of The Naked Island’s 96 minutes depicting the farmers’ and their children’s daily struggles with almost no dialogue. Instead, the film is accompanied by the sounds of the sea, the wind and the goats the farmers keep.

It might be difficult for some audiences to sit through this intimate, dialogue-free film. However, it is fascinating to watch people work, and Shindo shows us the painstaking routine the farmers must take: rowing across the sea to the mainland, carrying the water pails up a treacherous hill and giving a sip to each and every plant. Why do they do it? Just across the water is a town with modern conveniences and restaurants. That’s the central mystery of The Naked Island. Why don’t Shindo’s farmers reject this sort of life and cave to the comforts of modern living? 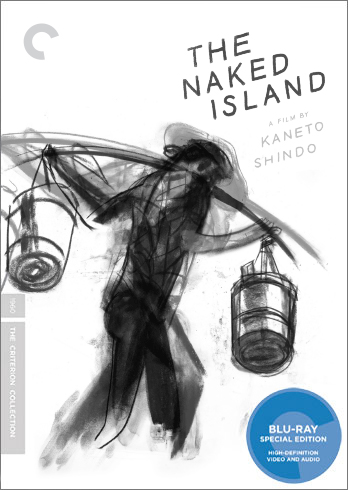 This isn’t an easy life, nor is it one that “builds character.” Shindo punctuates the routine with occasional “big” moments, proving neither the farmer nor his wife really enjoys living such a difficult existence. At one point, the wife accidentally drops a pail of water. Her husband responds with a smack across the face. Tension exists, even if the characters aren’t telegraphing their emotions via expository dialogue. This moment jars the viewer out of his lull, makes him realize that their expectation of the Japanese refusing modernity, just like those expectations of my ex-girlfriend, is unfair. It is akin to a Japanese person coming to the United States and expecting Native Americans with bows and arrows chasing bison. The Naked Island is a repudiation of such romantic notions. Its subjects won’t blissfully work for your enjoyment.

When the farmers and their children go to town for an afternoon, it’s almost as if they are different people. They take a motorized ferry rather than their rowboat. They dress in modern clothes rather than traditional garb. Yet, the family doesn’t seem to belong. The city feels like an alien place. Simple things such as eating at a restaurant and riding a tram up a mountain become exciting diversions for the children. So why not join the masses and move to the city? What is it about the island that keeps the family there?

The Naked Island stands in sharp contrast to Shindo’s other work. Best known for his horror film Onibaba (1964), Shindo never enjoyed the same popularity as fellow Japanese filmmakers such as Akira Kurosawa or Yasujiro Ozu. But like the ghosts that haunt Onibaba, the farmers and their obsolete lifestyle haunt The Naked Island. Trapped between the past and the future, relegated to a deserted island, their way of life is fading into obscurity.