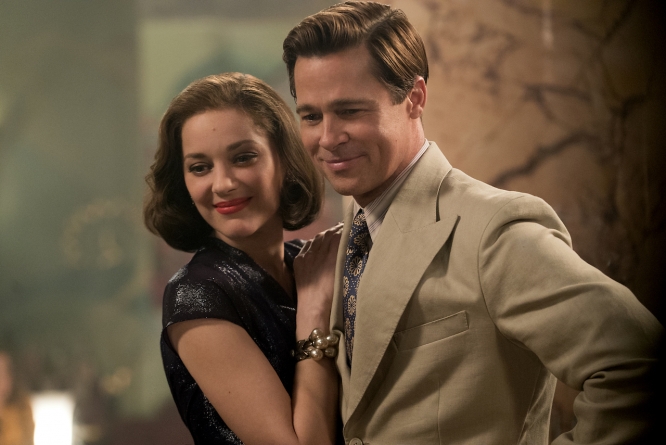 The rare case where a lesser, more workmanlike director might have executed a better film.

Allied features two capable leads in Brad Pitt and Marion Cotillard, a duo whose chemistry was powerful enough to be at the forefront of the Pitt-Jolie divorce rumors. Second, it’s a spy thriller set during WWII. That’s super hard to fuck up. And third, it’s written by Steven Knight, the reliable pen behind films like Dirty Pretty Things and Eastern Promises. Should be a good flick, right? Unfortunately, it’s directed by Robert Zemeckis, a legitimately great filmmaker who has no business being involved with this project.

Pitt stars as Max Zatan, a Canadian intelligence officer tasked with the assassination of a Nazi official in 1942 Casablanca. He’s partnered with French Resistance fighter Marianne Beausejour (Cotillard), under the cover of being married socialites. Marianne takes her job very seriously and believes the only way to properly perform is to forge genuine emotional bonds. Max is presented as an effective operative, but what he lacks in finesse and nuance, Marianne more than provides. Over the film’s first act, the two fall in love and move back to London to be married.

But once things settle down and Max has his desk job and Marianne gives birth to their child, Max’s superiors come to him with some bad news. They believe Marianne is actually a German spy who killed the real Marianne Beausejour before the mission in Casablanca and she’s been leaking secrets directly from Max’s phone calls. Max is tasked with leaving false intel out where Marianne can see it, then waiting out a long weekend to see if that information finds its way into enemy transmissions. But Max refuses to believe the woman he loves could be lying to him, despite lying being both of their professions, so he sets out to clear her name before the results of the “blue dye test” come back.

It’s a solid framework to explore the nature of espionage, thanks in no small part to Knight’s sturdy screenplay. Here he’s written a no frills approach to spy-fi and romance that works as a functional piece of genre waiting for a marquee director and a game cast to breathe life into it. That’s where the film falls short, though. Pitt and Cotillard are fantastic together, but Pitt’s performance, on its own merits, is the most boring work he’s done on screen since Meet Joe Black. He just has this lazy, dead-eyed presence throughout the film, like he’d rather be elsewhere taking a nap than trying to prove his wife’s innocence. This is the kind of picture that lives or dies on its stars and Pitt just doesn’t bring his A game.

His chemistry with Cotillard helps mask this of course, and she’s a natural fit for the role. Her wispy voiced aura and bright, open eyes make her both easy to believe and difficult as well, given how effective she’s proven herself to be at deception. Jared Harris is a standout as Max’s hard-nosed boss, as is Lizzy Caplan as Max’s sister. The core cast does a fine job of selling the domestic side of a spy’s life, shining in casual scenes as regular working stiffs who happen to trade in secrets for a living. It makes the switch back to operations in the second act all the more painful, seeing that disparity between everyday life and ferreting out a mole.

The real problem with Allied is Zemeckis. This just isn’t the kind of story that usually piques his interest and it shows. There’s not much room or need for his visual effects acumen, save for the few scenes dramatizing The Blitz, where his knack for computer generated bombast is as flawless as ever. This is particularly apparent in the scene showing Marianne giving birth as German planes drop bombs in the background. In later scenes, the omnipresence of The Blitz feels like an unsubtle metaphor, a constant reminder that even on the homestead, the war isn’t going away.

But those scenes just serve to highlight how lifeless his staging is everywhere else. As bored as Pitt looks, Zemeckis’ framing, composition and camera movements feel like watching a director suffer through a film he signed onto before reading the script. This feels apparent from the opening frame, where Max parachutes into the North African desert to meet his contact, only instead of shooting him doing this, there’s a very blatant use of a CGI Brad Pitt simulacrum doing the descending. It’s jarring and awkward and immediately gives the entire period a sense of unreality that’s hard to shake.

Allied is the rare case where a lesser, more workmanlike director might have executed a better film, if only because he might have been happy to be behind the camera and had anything to say at all about the material at hand. Instead, it remains a forgettable, occasionally engrossing drama that evaporates from the mind as soon as the credits begin to roll.