There was a time a few years ago when news about Odd Future Wolf Gang Kill Them All was inescapable—and for some, reading headlines about near-riots incited at concerts or concern over controversial lyrics may have been all they knew about the sprawling hip-hop collective. The closest thing that millennials have to something as volatile as the Wu-Tang Clan circa 1993-1997, Odd Future as a functioning collective eventually collapsed under its own weight as Frank Ocean and Earl Sweatshirt became breakout stars while others carved out small niches or toiled in obscurity.

As a founding member of the collective from its inception nearly a decade ago, the just released Fireplace: TheNotTheOtherSide represents the proper studio debut album from Hodgy (fka Hodgy Beats) following a number of mixtapes and collaborative efforts with other Odd Future members.

Clocking in slightly over a half-hour and spanning 13 tracks, what all these songs have in common is urgency. Hodgy, born Gerard Long, is unrelenting in his delivery throughout Fireplace—at times, as on the refrain to the album’s sleepy single “Barbell,” or on the Busta Rhymes featuring “Final Hour,” these words just have to leave his mouth, and they cannot leave it fast enough.

But just because Long spits bars with a frenetic exuberance, that doesn’t mean he’s saying anything that needs to be said. Therein lies the problem with an album like Fireplace. Just because its message is delivered with urgency, that doesn’t make the message itself urgent.

Nowhere near as introspective and self-deprecating as his Odd Future counterpart Earl Sweatshirt, and not even close to being as politically and socially conscious as, say, Kendrick Lamar, most of Hodgy’s lyrics focus on himself. He touts his prowess throughout the album, and strangely details his spirituality on “Resurrection”—“I wanna spread positivity like it’s leprosy, Lord/ I want to thank you for the gift that you’ve given me/ That lives in me, Lord.”

It’s a far cry from the group that was notorious for saying “Kill People, Burn Shit, Fuck School.”

While Hodgy raps with a lot of heart and belief in his own abilities, at times he comes across like he is rapping just for the sake of it, and not allowing any ideas or themes to sink in with the listener. As a result, Fireplace is neither a good nor a bad album—it arrives, and it simply exists.

This is unfortunate because it is obvious that a lot of effort was put into the album. Yet there does not appear to be much depth within the material, or at least much that resonates past one or two listens. It makes for a mostly forgettable experience.

Sure, the “bar for bar, bar for bar” refrain of “Barbell” is mildly infectious, and musically there are some interesting things happening here, like the low trudge of “Tape Beat,” the low key triumph of “Glory” and the uneven and jittery beat to “Dreaminofthinkin.” But those elements do not add up to make Fireplace an album that warrants multiple listens, or one that will live beyond its relatively short shelf life. 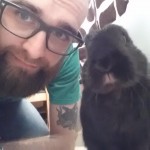