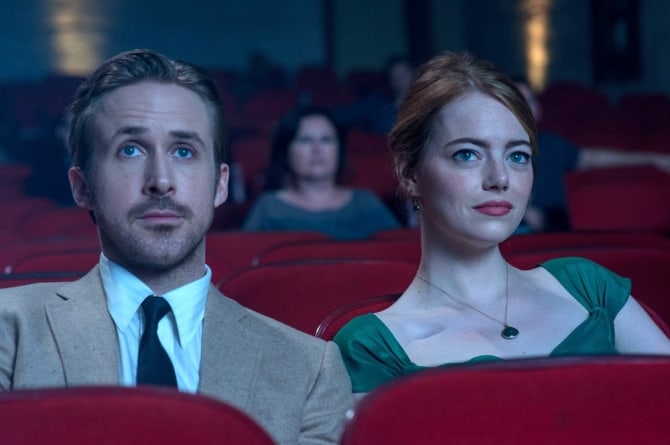 A shameless love letter to a bygone era of cinema, but it leverages that nostalgia to hide a tragic lesson about life and love.

As a musical, the individual pieces of La La Land are somewhat middling. The songs themselves aren’t particularly stellar, the choreography of the dance routines is serviceable and the vocal performances of the film’s leads are above average at best. But Whiplash helmer Damien Chazelle holds it all together with his throwback staging and ambitious direction. La La Land, above all else, is a showcase for a filmmaker coming into his own before our eyes, but it’s more than an empty exercise in pleasing awards-season voters. The film is a shameless love letter to a bygone era of cinema, but it leverages that nostalgia to hide a tragic lesson about life and love.

The film follows Mia (Emma Stone), a struggling actress, and Sebastian (Ryan Gosling), a principled jazz pianist. Initially spanning the four seasons between their first meeting in LA traffic and the ups and downs of their relationship, La Land Land is a little sprawling for a Hollywood romantic drama. That padded run time makes room for a secondary love story, one between the characters themselves and the dreamy idealism of trying to make it in LA. The film does a fine job capitalizing on Gosling and Stone’s easy chemistry for the romance, but the real magic comes in their scenes apart. Watching these two bright, dedicated artists repeatedly see the deflating needle of reality burst their effervescent bubbles elevates an otherwise straightforward boy-meets-girl routine to something more dramatically nourishing.

It’s in that shared ambition that their kinship first forms, with Seb encouraging Mia to write a role for herself instead of settling for the dreck she gets in auditions. Mia, without intending to, sets Seb down a path forked from his headstrong purist’s approach to music. He takes a job touring in a band with old friend Keith (John Legend) that goes against everything he upholds in an attempt to be the kind of stable provider type he thinks Mia wants. Because the rub in telling a love story isn’t bringing two people together, but rather tearing them apart, this rift grows larger until our leads are left at a crossroads.

Up until this point in the second act, La La Land feels solid. It’s well made, gorgeously photographed and framed with an infectious love for the silver screen that’s difficult not to be beguiled by. But it doesn’t feel particularly special. From the brilliant opening musical number “Another Day In The Sun,” it’s clear that Chazelle has leveled up since his last directorial effort. Seeing the evolution of his craft feels like the main attraction, with Gosling and Stone’s reliably strong work almost a bonus. With Jacques Demy and other influences proudly emblazoned on his rolled-up sleeves, it feels like Chazelle himself is the one tap dancing for us, soft-shoeing every trick in his playbook to show he’s ready for the big time.

But a well production-designed calling card does not a great film make. Once we crawl past the 90 minute mark, the audience is left wondering when we’ll just get to the fucking fireworks factory already and have the two attractive, talented white people kiss and make up before a cursive lettering animates over a lovely sunset marking the film’s ending. As objectively entertaining as La La Land is for its first half, it’s easy to wonder what the point really is as the celebratory sheen of revisiting an expired style begins to wear off.

Thankfully, Chazelle wasn’t content just to wildly show off for two hours. The film does a fantastic job of lulling the viewer into a false sense of security, using accepted psychological programming of the average cinematic romance to hook you from the left with a serious emotional punch in the closing sequences. It’s been quite some time since a film slid past home base with such verve and grace, transforming everything that’s come before it into something truly memorable. Some may be underwhelmed by the magic trick of melding the studio musical to the cloying macro of indie romance, but the resulting blend of genre reaps real dividends. Here, Chazelle has succeeded in using the tools of cinema’s past to make a powerful statement about love’s uncertain future.

Because of its strong marketing campaign and positioning, La La Land is sure to be showered with award nominations in the coming months. Hell, it’ll probably win quite a lot of them. There’ll be a healthy wave of backlash from those thinking the film a slight confection resting on Hollywood’s susceptibility to meta solipsism. But the film’s reception at large will miss what makes the movie such a resounding success. In movies, there must always be love stories, but it’s an absolute cathartic delight to see such an unhappy ending executed with such charming exuberance. Like the best movies, La La Land utilizes the power of big screen illusion to say something true about the emotional entropy of everyday life. What’s so wrong with that?