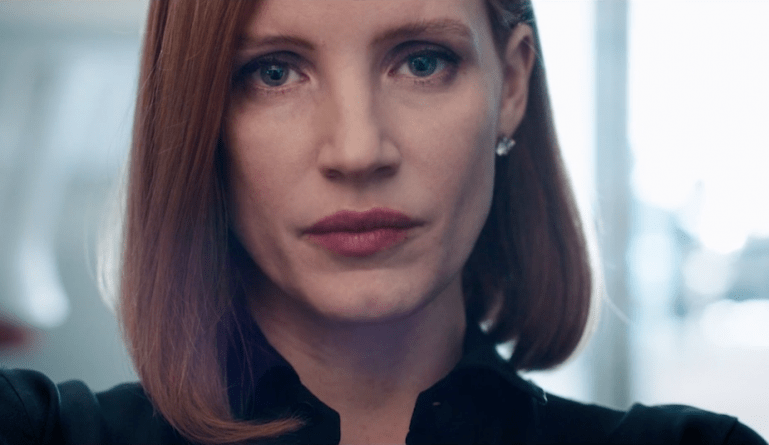 Everything that makes it shine rests on Jessica Chastain’s shoulders.

Given the current state of American politics, the idea of watching a two-hour movie with a lobbyist as its protagonist sounds about as enticing as smashing all the fingers on your dominant hand with a claw hammer. It’s a particularly unsavory career that’s immediately associated with the worst elements of political corruption. But drug dealers and murderers are reprehensible, too, and that hasn’t stopped us from rooting for Walter White or Dexter. In some cases, we even admire people with a high-functioning skill set, even if they are best suited for tasks we deem distasteful. A film like Thank You for Smoking got away with it by being a satire and looking for the morbid humor inherent to such an irreparably fucked system, but it also relied heavily on the immense talents of its star, Aaron Eckhart. Similarly, Miss Sloane is well directed and sharply written, but everything that makes it shine rests on Jessica Chastain’s shoulders.

Chastain plays Elizabeth Sloane, a workaholic lobbyist with a reputation for being an effective hard-ass. She’s presented as being almost superhumanly good at her job and possessing a moral vacuum that would make Dyson proud. The film introduces the character while she’s working for a big lobbying firm that can barely tolerate her but can’t deny the results she produces. They pitch her on working with the gun lobby to kill a gun control bill being pushed by the Brady Campaign, which she balks at. It’s an interesting development, given that it’s the first glimmer of any kind of limit for what Sloane won’t abide by in her pursuit of winning. She gets recruited by Rodolfo Schmidt (Mark Strong) to lobby for the Brady Campaign and to try to get the bill passed, setting her up for a big war with her former employers.

What’s fascinating about the film is how much work it puts into making Sloane unlikable. Part of that is in the casting. There’s a mustache-twirling villainy to the men at her old firm, but Sam Waterston and Michael Stuhlbarg both possess a specific brand of likability that dulls their blatant vileness. Her new firm is populated by kind, young souls like Esme Manucharian (Gugu Mbatha-Raw), who’s so genuine and warmhearted as to make Sloane look like a pant-suited block of ice by comparison. These opposing sides leave Chastain in the middle to do some stellar work giving life to a complex, difficult-to-like but easy-to-root-for heroine. Chastain has given the performance of her relatively young career, playing a woman who gets to be as morally dubious and prickly as many of her male counterparts.

Some of what makes her turn work is in the antimatter-universe Sorkin style of Jonathan Perera’s screenplay. The first-time scribe’s penchant for wordy, brisk banter rife with hyper-detailed industry jargon and a persistent display of cleverness calls to mind “The West Wing” creator’s work, but after a fashion. Where Sorkin loves to trot out his extra-communicative liberal sweethearts and their perpetual walk-and-talks, Perera’s got a slightly crueler perspective and pushes his charming chatter to the menacing levels of a John Grisham thriller. Perera transposes elements of the caper film or other crime fiction to reframe political graft in a way that’s more entertaining and less a depressing mirror held up to our failing society.

Elizabeth Sloane could be a guest star on a Sorkin show, but by the episode’s end her tough exterior would be reduced to a heart-melting monologue explaining away any complexity with an easy to parse confessional. Here, she’s allowed to remain unrelatable to most of the audience, but extremely intimate to others. When Sloane finally does get that monologue to lay herself bare, she’s not given some disingenuous new softness. She never has to be compromised for the perceived idiocy of the mainstream, never having to stoop to the very low bar of merely being liked.

If the film has a major drawback, it’s in the dense plotting Perera relies on. The twists and turns mostly hang together well, but the foundational structuring necessary to seed so many future reveals and callbacks bloats the film’s runtime. Miss Sloane tries to save screen-time for some fascinating characterization, but the film has to keep squeezing in the complicated layers of passing a bill through Congress as well as the shady dealings that grease the wheels. At its best, it feels like watching two dueling crews perform a heist race on the Capitol.

Miss Sloane could be shorter, tighter and paced a hair better. Some of the logic leaps necessary for the film’s final blows to land can strain credulity as well. But ultimately, Miss Sloane is a well-executed character study housed in a layered drama that ends on a high note, one of the most satisfying endings of the year.