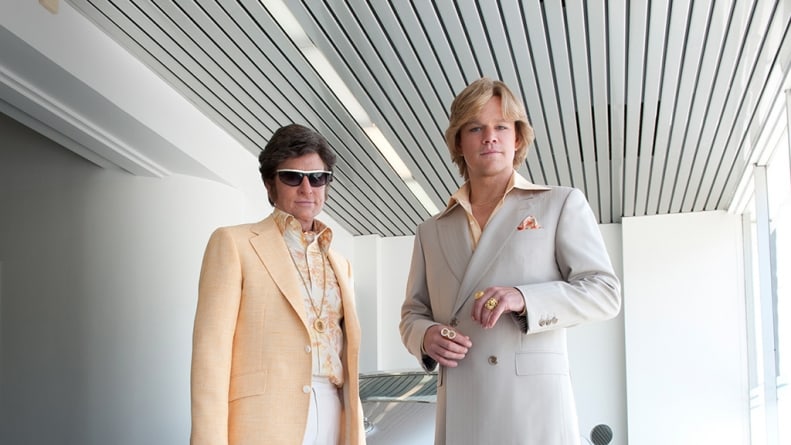 This is a true story involving a person’s fight for justice (or what they perceive to be their just rewards).

In comparison to Steven Soderbergh’s work on the likes of Erin Brockovich or Contagion, a look at the rocky romance between Liberace and lover Scott Thorson might seem like an odd change of course. But, really, Behind the Candelabra fits right within the director’s wheelhouse. Like Erin Brockovich, this is a true story involving a person’s fight for justice (or what they perceive to be their just rewards).

It’s also an attempt to break down the barriers that remain in place regarding homosexuality in Hollywood films. Unable to garner a theatrical distributor stateside – international audiences were able to watch this in theaters – because of its frank and uncompromising look at a gay relationship, HBO picked up the film and went on to nab two Golden Globes in the process.

The film follows the naive Scott Thorson (Matt Damon) who ends up becoming the live-in boyfriend to famed pianist Liberace (Michael Douglas). Soderbergh’s glittering tribute to the world of Old Hollywood is as reverent as the Coen brothers’. Though the film’s events take place around the 1970s, Liberace’s closeted sexuality is steeped in Old Hollywood fears. Presumed to be “dating” the likes of skating star Sonja Henie, the pianist is content to be open about himself only in private. When Scott walks in on Liberace (Lee at home) without his trademark pompadour, the man and the myth are divided. It’s a moment so startling you’ll initially assume it’s a different actor and not Douglas in a bald cap.

The film’s narrative path is that of a standard romance, with an emphasis on the break-up. Damon’s Scott is a beautiful blonde California boy with a swath of naivety a mile wide. He’s the perfect figure to be seduced by Liberace’s garishly glittering world, a literal personification of Hollywood just waiting for Scott’s small-town boy. Living with his foster parents, Liberace becomes the gentle father figure Scott needs. Damon’s charm and lack of guile works to the character’s advantage, though believing Damon is as young as the character is (about 20 or so) becomes laughable, especially when Lee declares he’ll adopt Scott. As asked in the film, why would a grown man adopt another grown man?

Damon and Douglas are fantastic together. Everything about their relationship is genuine, even if Douglas is imitating Liberace’s vocal falsetto. Many claimed the frank sex scenes between the two turned off American distributors and it’s unsurprising. They’re not exploitative, but are on par with what heterosexual couples do during an average episode of “Game of Thrones.” Outside of that, their relationship is doomed from the start. Lee is a tempestuous figure who replaces paramours like bedsheets – Cheyenne Jackson steals the show as Lee’s love pre-Scott. Numerous characters warn Scott of Lee’s temperament; Bruce Ramsay’s droll manservant Carlucci does so with aplomb. But most of the people in Lee’s life are apathetic. They’ve seen this before.

As Scott becomes mired in drugs, he and Lee become two sides of the same coin. Damon gets a chance to let loose as the screeching harpy demanding what he wants. In fact, the final third of the movie sees Douglas take on a more subdued role. Overall, this is Damon’s movie more than anyone else’s.

Soderbergh’s directing is as gaudy as his characters, and it’s amazing he got the likes of Douglas, Damon, Debbie Reynolds and Dan Akroyd, who all turn in wonderful performances of different magnitudes. Behind the Candelabra shows the beauty of Hollywood and the pettiness of it all. Douglas and Damon spotlight a legend and the man along for the wild ride.

Kristen is a Sacramento native and alumnus of CSUS with a Masters in English. Her work has been published at Film School Rejects, The Playlist, Awards Circuit, and Cinema Sentries. She's also the Associate Editor at ClassicFlix and the owner of Journeys in Classic Film. Her tweets can be found at Journeys_Film.