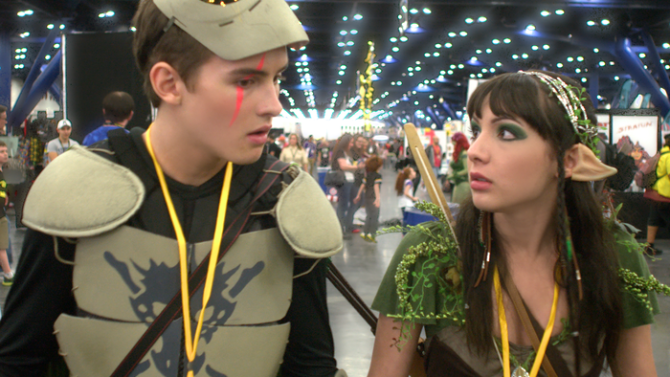 Fun and slightly more unique than your average teen comedy.

Though Slash, writer-director Clay Liford’s new film about a sexually questioning teen’s foray into “slash-fiction” (which is fanfiction featuring same-sex couplings), is elevated by its unique subject and by great performances, it is a relatively generic teen comedy at heart. This is a shame, because Slash’s approach to its protagonists’ shifting, evolving sexuality feels very current and fresh. Unfortunately, these protagonists, Neil and Julia (played by Michael Johnston and Hannah Marks of TV’s Teen Wolf and Dirk Gently’s Holistic Detective Agency, respectively), spend a third of the film in their boring high school and another third trapped in a will-they-won’t-they romance.

Interspersed throughout these long bouts of uninspired teen comedy, however, are a few bright spots. These include a sexy, funny turn by Tishuan Scott (The Retrieval) as the handsome, sexually fluid space pirate at the center of Neil’s fanfiction, several very funny performances of bombastically sexual fanfiction and Neil and Julia’s whirlwind tour of the Con, which appears to have been filmed in a real-life convention and feels like a gesture of respect towards the community, which is alternately embraced and lampooned by the film as a whole.

Also good are the performances. Johnston, in particular, is fantastic, delivering an awkward, funny and relatable performance as an uncertain teenager entranced and horrified by every situation he finds himself in. Marks delivers a fine performance as well, but her role, which is just self-aware enough to avoid the manic-pixie-dream-girl label, is written too much in service of male characters and doesn’t give her enough of a chance to spread her wings. And Michael Ian Black and Jessie Ennis are both funny and tragic in roles that could have easily been caricatures.

The real star of Slash is the subject matter, but it is treated with such a discordant mix of disdain and appreciation that it isn’t clear what Liford wants the audience to take away. On the one hand, Neil and Julia come across as cooler and infinitely more interesting than their peers because of their involvement in slash. However, when they finally get to the convention and meet the others of the tribe the characters they meet are an uncomfortable mixture of pitiable and closed-minded and it, at times, feels as if the film is unduly harsh to the community it originally appeared to be celebrating.

In addition, Liford exercises so much restraint with his treatment of the fanfiction and Con communities that both come across as vague. Most of the darker material (which includes a narrowly missed statutory rape, underage drug use and a lot of dirty fanfiction) is either given G-rated treatment or is merely alluded to and takes place off-screen. This is a shame because the film is at its best when it is at its craziest, and Neil and Julia come alive as characters when they are tasked when doing outrageous things. The best films about teenagers embrace the dark side of teen life, and Liford’s failure to go there is a missed opportunity, particularly when coupled with the safe treatment of fanfiction and Cons.

Overall, Slash is fun and slightly more unique than your average teen comedy. But if the filmmakers would have just been a bit bolder, it could easily have been a classic of its genre rather than just a solid entry.