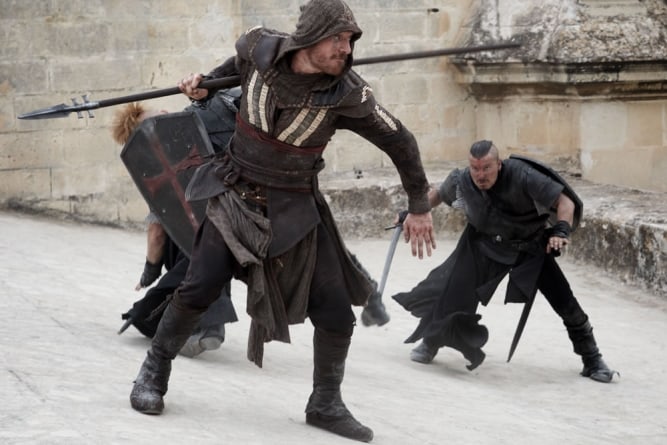 Nothing tempers expectations for a film’s quality like seeing “based on the hit video game” tucked away on the poorly-produced poster.

Nothing tempers expectations for a film’s quality like seeing “based on the hit video game” tucked away on the poorly-produced poster. In the pantheon of severely shitty video game movies, Assassin’s Creed doesn’t even rate. This is no Ballistic: Ecks Vs Sever, but it would be something of a stretch to call it “good.” “Watchable” seems more fitting. “Inoffensive” maybe. Shoddy craftsmanship aside, it’s a movie stacked with onscreen talent, even if the folks behind the camera are struggling to turn populism into prestige.

As far as premises go, Assassin’s Creed is at least based around a concept that lends itself to the big screen better than most video game adaptations. Squarely aimed at History Channel buffs who love a bit of the old ultraviolence, it concerns itself with the ongoing war between the Templars and the order of Assassins sworn to protect society from their tyranny. Rather than straight up recreating the narrative from one of the series’ many entries, director Justin Kurzel and his team of writers forge an original story that plays out within the existing framework of the mythology. It’s not a bad story they’ve concocted, but it reeks of artsy desperation, of Hollywood scribes bending over backwards to elevate the source material to the pedigree of its cast.

Michael Fassbender stars as Callum Lynch, a convicted murderer who is saved from capital punishment by the modern iteration of the Templars, a corporation called Abstergo Industries. There, Dr. Sophia Rikkin (Marion Cotillard and her trademark dramatic whisper) straps him into a machine called the Animus, which uses “genetic memory” to make a subject relive the lives of his ancestors. Lynch is descended from Aguilar de Nerha (also Fassbender), an assassin the Templars believe holds the secret to the location of the Apple of Eden. They want the Apple because it holds the genetic code to free will? Or something like that. Certainly not because the writers thought it’d be hilarious to make Jeremy Irons (who plays Sophia’s father Alan) yell “he has the Apple!” Definitely not that.

As Callum, Fassbender does a fine job weaponizing his usual charisma. He gives a pretty threadbare character the impression of depth if not the real thing. Lynch is a lonely drifter who watched his father kill his mother and feels loyalty to nothing and no one. In the flashback scenes, Aguilar is the opposite. He’s singularly driven by a cause he would willingly sacrifice his life and love for. By reliving Aguilar’s exploits, Callum slowly begins to understand why his father did what he did and comes to perceive something greater than his own pain and frustration. Also, he learns all of Aguilar’s badass fighting skills. In the present, Fassbender has to be an angsty rebel who can’t believe the bullshit science fiction movie he’s trapped in, but in the past, he’s a silent ass-kicker slitting throats with surprising aplomb.

Really, those are the film’s best scenes. The historical framework and doofy MacGuffin aside, Assassin’s Creed houses some incredible fight choreography, even if Kurzel struggles to lens the hand-to-hand combat with style or coherence. At its best, the action sequences resemble gameplay footage from the source material, only more weighty and visceral (and still somehow PG-13?) But the spectacle isn’t inventive or thrilling enough to make up for the otherwise flat storytelling. For every moment that gets your blood pumping with Aguilar leaping off a tower and stabbing bad guys, there’s an equally drab exchange of dialogue that follows the rhythm of a Google search auto-filling to whatever the least-interesting version of a sentiment could be.

For fans of the game series, Assassin’s Creed pays enough homage to the rich mythology to entertain. There’s the hint of deeper themes and everything is played with a welcome sincerity that largely masks its hokier elements. But for anyone hoping for something new under the sun, there’s precious little to latch onto here that you couldn’t get out of just playing the game yourself, or even watching a friend do the same.