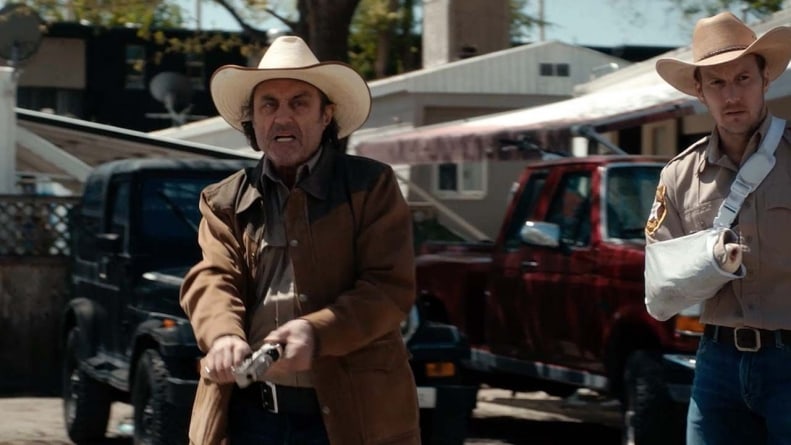 The Hollow Point plays like an Asylum version of No Country for Old Men.

Before we get into the meat of this review, there are two unassailable facts to address. One, this film isn’t very good. Two, that doesn’t matter in the slightest. Why should quality not matter? Because The Hollow Point prominently features Ian McShane in a cowboy hat and any threadbare narrative becomes instantly more worthwhile if it subconsciously reminds the audience “Deadwood” exists and is streaming on HBO GO in perpetuity. The movie’s got other things going for it, but none of those elements matches the added value of McShane’s borderline magical screen presence.

The Hollow Point plays like an Asylum version of No Country for Old Men, taking place in a border town being ravaged by the illegal ammunition business. McShane plays the aging dinosaur sheriff Leland. We know he’s an “aging dinosaur” because no less than three principal characters use that exact phrase to describe him, but we feel it because McShane’s face looks like a sculpture molded to express deteriorating masculinity. He crosses one line too many and gets replaced by Wallace (Patrick Wilson), a baby faced asshole returning to the town after a time away. We know Wallace is an asshole because someone called him one every single time he leaves a room. Pretty killer characterization.

There’s an ammo deal gone bad between a Mexican cartel and the lowlife, stateside slackers employed by crooked used car salesman Shep (Jim fuckin’ Belushi.) A promise was broken, so now everyone involved down the line has to answer to Atticus (John Leguizamo), a ruthless operative who answers only to The List given to him by his superiors. He’s basically a less interesting Anton Chigurh. Leguizamo tries his best, but if you’ve ever seen The Pest, you’re just not going to be afraid of anything he says or does in this film, even when it involves cutting Wallace’s hand off. (John Leguizamo is an incredible performer, but this isn’t just outside of his wheelhouse. It’s in another time zone.)

There are a lot of twisty plot machinations, but none of them make much sense, which is fine really, since this is just a delivery system for Ian McShane to be really fucking cool. A lot of neo-western crime thrillers feature law officers who don’t follow the rules, but McShane’s Leland is another beast entirely. He takes the usual loose cannon trope and imbues it with an earthy pathos that transcends the otherwise DTV nature of the film. The dialogue is universally try hard and awful, but McShane makes his lines seem like improvised poetry. He comes off like Charles Bronson doing Shakespeare in the park and while that may sound like a backhanded compliment it is meant as the highest of praise.

Wilson continues his streak of fantastic performances, even though he is forced to play a character whose only distinguishing characteristic is that he gets his hand cut off so it looks more badass when he racks his shotgun. He has some hinted at backstory involving an ex-girlfriend and a rumor that he died on the mountains when he left town, but if it ever gets properly addressed, it’s lost in a morass of inconsistent plot progression and messy revelations. The movie is a lot of fun when it’s just Jim Belushi pretending to be the bad guy from Blood Simple and people getting shot in the head, but when it tries to transform into some kind of rustic, spiritual statement in the third act, it becomes downright insulting,

Criticisms aside, the only inexcusable element is director Gonzalo López-Gallego’s unhealthy obsession with constantly moving the camera. He’s got a background in found footage, so maybe the opportunity to break out of that restrictive genre just broke the switch in his film school brain that says not to employ every single visual trick you’ve ever learned. Either way, his compositions and reliance on loping drone imagery seem fascinating at first, but become seriously distracting when it becomes clear he’s going to try for dynamism in even the simplest of scenes. It’s meant to make the film feel more kinetic, but it’s ostensibly a western. Westerns need those quiet, still moments to give the action more life. If every moment has some kind of camera drift, it begins to feel like a crutch instead of a tool.

The Hollow Point isn’t an easy film to recommend. More than likely, it’ll have a rich future as a YouTube compilation video featuring the best McShane line readings, eye movements and reaction faces. For that alone, it’s more watchable than a slew of better executed films released this year. Just don’t lie to yourself about what got you in the door.