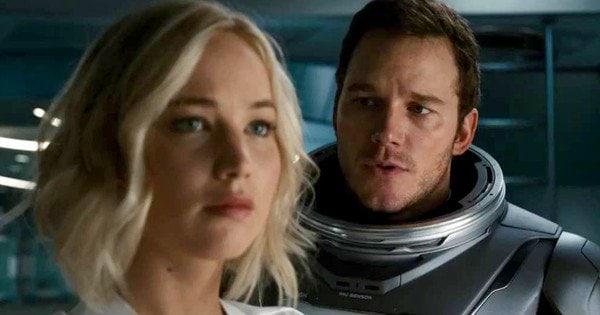 Big studios used to save the best for last, rolling out their prestige films on and around Christmas. However, the big yuletide movies this year are the type often reserved for the dead zone of January. Along with guaranteed-to-stink ticking bombs such as Assassin’s Creed and Why Him?, the middling Passengers was also granted a late December release. On the surface, a big budget sci-fi film starring Chris Pratt and Jennifer Lawrence sounds like a can’t-miss proposition. Toss in director Morten Tyldum, fresh off his acclaimed 2014 Benedict Cumberbatch vehicle, The Imitation Game, and Passengers sounds like the perfect nemesis for Rogue One. Sadly, it doesn’t come close.

Passengers doesn’t know what it wants to be. Is it comedy? A romance? A disaster action film? It contains elements from all those genres, but they never coalesce into a satisfying whole. Things get off to a promising start when Jim Preston (Pratt) wakes up from cryogenic sleep on a giant spaceship to find himself alone. He is an engineer, en route to a colony on a new world along with 5,000 other slumbering passengers. The journey is scheduled to take 120 years and Jim soon realizes that his awakening was an accident. There are still 90 years to go on the journey. Unable to put himself back to sleep, Jim is doomed to spend the rest of his life alone, save the company of the ship’s A.I. and an android bartender played by Michael Sheen. Jim makes the most of his time, sleeping in executive quarters, drinking and eating his fill, playing video games, but despair and loneliness soon take over.

Jim soon becomes fixated with one of the passengers, the journalist Aurora Lane (Lawrence). He watches videos of Aurora on the ship’s archive, spends time staring at her sleeping face in her pod, commiserates with the bartender about his solitude and feelings for Aurora. Overcome with sorrow, Jim short circuits her sleeping pod, waking her up. Passengers completely sidesteps the moral quandary Jim faces by awakening another passenger, turning the secret into something out of an episode of “Three’s Company.” At first devastated and terrified, it doesn’t take long for Aurora to fall in love with Jim. While they get closer, Jim suppresses the truth of her awakening to Aurora, hoping that she will never discover that it was him, and not a malfunction, that brought her out of sleep and dooming her to the same fate of spending the rest of her life trapped on the ship. They turn the spaceship into their private Eden, screwing on tables and in the plush cabins reserved for the upper echelon passengers. It may sound creepy that Jim is playing fast and loose with someone else’s life, and it certainly is creepy, yet Passengers uses Pratt’s charisma to laugh off such a monumental decision. A better film would have mined this decision, used its run time to explore the deception, but not Passengers.

It all just panders too much. Wouldn’t it be a better film if it begins with Aurora’s awakening and then the audience slowly learns along with the character the truth behind her situation? Instead, Passengers devolves into disaster film clichés and the cheesy notion that true love conquers all. There’s even an extended resuscitation scene. Tyldum, who cut his teeth on the deliciously amoral Headhunters, is no stranger to subversion. However, he and screenwriter Jon Spaihts have decided to play it by the book in Passengers, a decision that results in a confusing movie with confusing morals that wastes the talent of everyone involved.