Five years is an eternity in the life of a film. When coming up with this feature, the question the Spectrum Culture staff pondered was this: “How well do these movies play NOW!” Not five years ago, but how have they aged in our memories. While some acclaimed films of 2011 remain strong on our list, some critically-lauded ones didn’t have the staying power. The Artist, The Descendants and Moneyball didn’t make the cut in 2016. This list is designed to give new perspective on things five years old. Thank you so much for reading! 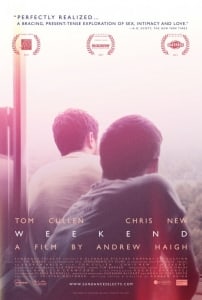 Andrew Haigh’s gorgeous, romantic Weekend is kind of a gay cousin to Richard Linklater’s Before trilogy. Its power comes from closely observing a relationship over the course of several conversations and intimate encounters, not from bombastic melodrama or plot twists. Weekend is a quiet, sensitive look at the relationship between two men who meet at a gay club. At first, it seems like little more than a hookup, but as the titular weekend unfolds, it blossoms into something deeper.

Weekend is all the more impressive in that it was only writer/director Haigh’s second film. Since then, he’s gone on to create HBO’s excellent two-season series “Looking” and the stunning film 45 Years, which garnered Charlotte Rampling a Best Actress Oscar nomination. Though Haigh goes for a realistic, natural approach to Weekend’s romance, the film itself is very stylized, with beautiful cinematography by Polish cinematographer Urszula Pontikos.

And though Weekend’s subtlety requires a slow pace, Tom Cullen and Chris New (in what is basically a two-man show) handle that pace wonderfully, achieving a believable, aching romance in under two hours. What’s particularly refreshing about the romance itself is that the characters are fully-rounded and unique, not just the amalgamation of gay stereotypes that appear in so many other films. As a result, Weekend is one of the best gay films of all time and certainly one of the best overall films of 2011. – Mike McClelland 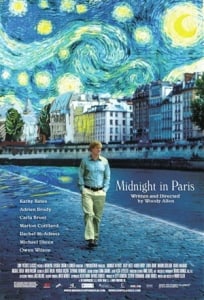 Despite neurosis and cynicism defining many of the characters he’s written and embodied over his prolific career, Woody Allen is no stranger to viewing his cinematic world through rose-colored glasses. Most often, Allen has romanticized place, with a New York love-affair obviously dominating his oeuvre, but he’s also reserved a sentimental glow for certain eras, whether it be the Radio Days of his youth or the Depression-era movie-houses of The Purple Rose of Cairo. In 2011, Allen released his best film in years by doing both, using Paris as the picturesque backdrop for his Roaring Twenties fascination previously captured in Bullets Over Broadway.

When burnt-out screenwriter and struggling novelist Gil (Owen Wilson) vacations to Paris with his materialistic fiancée (Rachel McAdams) and her parents, he’s swept up by the city’s timeless beauty and he wants nothing more than to walk the streets in the rain. When he happens upon a street corner where an old-timey car picks him up, he’s transported back to the Paris of the ‘20s, getting a chance to hobnob with the likes of Ernest Hemingway, F. Scott Fitzgerald, Gertrude Stein and Salvador Dalí in the era he most romanticizes.

Allen uses warm hues to saturate his film in a golden and rosy ambiance. With a bit of magical realism, literary humor and change of scenery (his first film shot entirely in Paris), he created an intensely memorable film that still resonates five years later by taking the existential angst common to many Allen projects and trading it in for a lesson on the ultimate futility of idealizing an imagined past. – Josh Goller 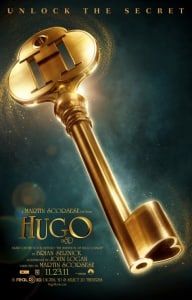 Martin Scorsese found the ideal source material—Brian Selznick’s wonderful illustrated tome The Invention of Hugo Cabret—to finally translate his lifelong adoration of the silver screen explicitly to the silver screen. Hugo is the rare celebration of movie magic that isn’t also a love letter to Hollywood. Since its thematic and narrative focus is on early cinema and that era’s towering innovator Georges Méliès, the setting here is—instead of Tinseltown—1930s Paris and, in large part, the Gare Montparnasse train station.

The particulars of Hugo’s mystery plot (and there are many) seem beside the point five years later. The titular orphan’s quest is to discover the secret behind an automaton his father was working on before he died. This, of course, is merely a heart-tugging MacGuffin to get Hugo (Asa Butterfield) to meet toy store owner Georges (Ben Kingsley), who, after so many twists and turns, we come to find out is an aging Méliès, bitter and dismissive of his past glories. The real mission at the center of Hugo is its characters’ attempts to convince a great artist of his greatness. And in doing so, Scorsese’s film offers historical examples of the medium’s revolutionary beginnings.

Hugo itself is a marvel of three-dimensional filmmaking—on the shortlist that includes Life of Pi, Cave of Forgotten Dreams and Gravity—which suffers from being flattened into two. Scorsese’s frames are almost always teeming with moving parts, but his camera swoops below, above, around and mostly through them. It’s a magnificent 3D experience. And it can only be replicated fully, at least for now, not while checking Twitter in your living room, but in Scorsese’s temple: a movie theater. – Peter Tabakis 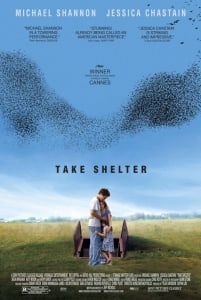 If you’ve listened to talk radio in the last decade, you have heard variations on the theme that the (white) American male is under attack—by minorities, by women, by ungrateful and entitled youngsters, all of whom want to take what this hardworking fella has earned for himself. In the films by Jeff Nichols, there’s something to that anxiety, except this filmmaker understands it is not a recent phenomenon and that the feelings of insecurity are not caused by the groups listed above. They are part of the American male’s core, which may well be rotten (or rotting).

In Take Shelter, Nichols’s second feature film, Curtis (Michael Shannon) is just the type of marginalized man who tells himself he wants only to provide for his wife, Samantha (Jessica Chastain), and daughter, Hannah (Tova Stewart). His anxieties about his work at a struggling utility company in the bleak Midwestern cornfields, his physical and mental health, his inability to hold onto his place in his community (he doesn’t want to be prominent, only seen and noticed) all work to corrupt his mind, leading him to nightmares and apocalyptic visions. Nichols shoots these night terrors with eerie mundanity, as if to acknowledge that these dreamed-up scenarios (like shadowy, malevolent figures grabbing young Hannah from his pickup truck in the rain) are part of everyone’s day-to-day experience, but viewed through a poisoned lens of onsetting schizophrenia, inherited from Curtis’s occasionally hospitalized mother. And in the end, maybe the seemingly crazy, building-a-bomb-shelter-in-the-backyard-with-money-he-doesn’t-have guy was right all along. And maybe correctness doesn’t matter. A storm of physical or mental danger is on its way nonetheless. – Rob Samuelson 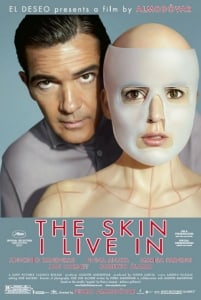 6. The Skin I Live In (dir: Pedro Almodóvar)

Robert Ledgard (longtime Almodóvar favorite Antonio Banderas) is a plastic surgeon who has perfected a synthetic skin used on a beautiful and mysterious patient (Elena Anaya) that he keeps captive. For the most part, the Spanish filmmaker sheds the outrageous flamboyance for this provocative, multilayered mad-scientist thriller. From its lush visual style to a strong ensemble cast, the complicated plot unfolds with an expertly Hitchockian gaze that seems uncharacteristic of a director often known for garishly colorful and zany comedies. The Skin I Live In works as a revenge drama and as a horror movie, but what makes it most intriguing, especially after the intervening years, is its curious gender politics, which some found problematic at the time. (Do not read any further if you haven’t seen the movie.) When the film reveals the true identity of the doctor’s prisoner, it raises the question: is being female a punishment? Is being a gorgeous woman a punishment? How do you begin to parse this kind of male gaze from a gay director?

The Skin I Live In was unfairly compared to The Human Centipede at the time simply because it was another mad-scientist movie that was fresh in the cinematic consciousness. But the real source may have been Georges Franju’s 1960 horror film Eyes Without a Face. Both films deal in issues of scientific ethics, but Almodóvar throws in a decidedly 21st-century complication. The director followed this up with the disappointing return to comedy, I’m So Excited!, but this movie proves that, at his best, his films are completely entertaining and unexpectedly thought-provoking. – Pat Padua