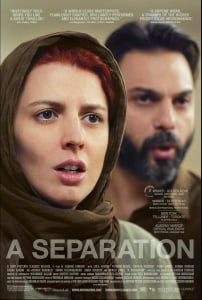 Writer-director Asghar Farhadi’s A Separation was the first Iranian film to win an Academy Award for Best Foreign Language Film, and is one of the few foreign language films to be nominated for Best Original Screenplay. While awards attention doesn’t always equate to quality, in the case of A Separation these accolades are pertinent. A Separation is not an Americanized film from another country told in a foreign language, as many winners in the foreign-language category have been. Instead, it feels vitally Iranian, telling a story that relies on cultural nuances and sensibilities (though these are well-explained and not exclusionary to audiences unfamiliar with Iran). Second, the attention paid to the screenplay is well-earned, as much of the film’s tragic power lies in the subtly complex plot.

A married couple is driven to divorce over conflicting family interests. Simin (Leila Hatami) wants to move abroad to raise their daughter, Termeh (Sarina Farhadi, the director’s daughter) while Nader (Peyman Moaadi) wants to stay in Iran to take care of his ailing father. The court refuses to grant them a divorce and Simin moves in with her parents, forcing Nader to hire a caregiver for his father. The caregiver (Sareh Bayat) is of a lower class and also pregnant. She has gone behind her husband’s (Shahab Hosseini) back to get the job, though legally it should have required his approval. The plot twists and turns from there, resulting in a number of conflicts, and Farhadi is careful to approach each one with compassion for both sides.

The cast is excellent, particularly Hatami and Moaadi, but no one gets in the way of the Farhadi’s outstanding plot, which represents many of the issues of class and gender conflict in modern Iran while still telling an original, personal story. Of particular note is that A Separation does not seem to have any villains or heroes, instead telling a compassionate, devastating story with real people at its center. – Mike McClelland 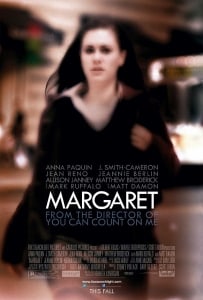 Shelved for half a decade, Margaret emerged a baffling, immediately-buried curio in 2011, an allegory for 9/11 that might as well have been a period piece upon its eventual release. Yet the film itself has such urgency that it feels as fresh, both upon its release and in the present day, as it would have in the first months after the terrorist attacks. Where September 11th otherwise inspired a combination of repellant nationalism and navel-gazing faux-reflection, Kenneth Lonergan opts for the less obvious route of personal melodrama, in which trauma, guilt, bewilderment and defensiveness are not mere stand-ins for the events of that day but their subliminal aftershocks. Anna Paquin is not the embodiment of those destroyed in the Towers; more chaotically, she is an avatar for those left behind.

The fearlessness of Lonergan’s film lies in the unvarnished performances of its actors, who manage to emote to the rafters without ever being showy, to come across as a collection of people struggling desperately to hold the banalities of their lives together. Yet, for a movie that revolves around 9/11 in far subtler fashion than the films to tackle that subject directly, it’s oddly fitting that the splenetic drama should ultimately resolve itself literally at the opera. The florid nature of this conclusion is the perfect end to a movie that has all the honest observation and manic, unfiltered expression of a Cassavetes classic. – Jake Cole 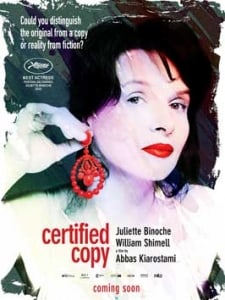 Abbas Kiarostami ended his career in exile, dying in Paris this past summer at the age of 76, his two final films shot outside of his native Iran. This period of creative self-banishment—apparently foisted upon him through constraints imposed by a restrictive government regime—concluded the legendary auteur’s oeuvre on a tragic note. Yet it was also a poetically appropriate one for a director so focused on the emotional realities of political and personal dislocation.

Such a state was communicated directly in his last feature, the beguiling, at-times baffling Like Someone in Love, which recounted, in unorthodox fashion, the relationship between a student moonlighting as a prostitute and a retired professor, a movie defined by strange choices, mysterious elisions and jarring intrusions. But as perfect of a summation as it may have been, this final work couldn’t match the effortless perfection of Certified Copy, the last of his several masterpieces, a numinous tale of renewal and disconnection about two people whose exact relationship to one another is never entirely explained.

Five years after its release, this Tuscan-set fable still perfectly sums up the enchantment of travel and discovery, the thrill of seeing the world with new eyes, as well as the equivalent disappointment of again realizing that it’s the same all over. Poised between sun-dappled beauty and shadowy unease, it’s muted, naturalistic aesthetic takes in these ancient landscapes with an eye for both their inherent wonder and all the sorrow they’ve witnessed, capturing these disjunctions perfectly. The result is a film that matches Kiarostami’s best work in splendor and effect, standing out as both bracingly immediate and completely timeless. – Jesse Cataldo 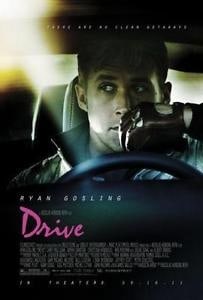 Even five years later, Nicolas Winding Refn’s Drive—frequently reduced to its ambient score and cinematography—still sparks arguments among film lovers. Hell, we even ran a Criminally Overrated feature on it this year. The essential argument comes down to this: Refn produced a masterclass in cinematic aesthetics, but does that constitute a worthwhile film? But let’s rewind just a little bit, because Drive does have a plot. It’s not all just Ryan Gosling looking great while driving cool cars and brutally beating people up. The story itself is couched in classic vigilantism, with touches of the damsel-in-distress (Carey Mulligan’s Irene) and some good ole heist film tropes. And there is truth to complaints about the film’s dearth of explicit emotions or personalities in its meager cast of characters. But Refn is painting in broad—yes, “arthouse”—strokes here.

Drive operates as a sleek neo-noir and therefore works in the mode of a modern parable, its characters—at least Gosling’s unnamed driver —necessarily functioning as everymen. Any film in the noir tradition puts its characters in dark, seedy situations and allows a morality tale of sorts to play out. The protagonist is never morally bankrupt but makes questionable decisions, ostensibly because of his strange situation. You never get the sense that Gosling goes around stomping in people’s heads on a daily basis. Drive may still spark a few tiffs here and there, but it is undeniably a hyper-stylized take on a classic American genre, one that managed to prove interest in noir still existed and that there is just as much artistic potential in a genre built on rigid stylistic design. – Katherine Springer 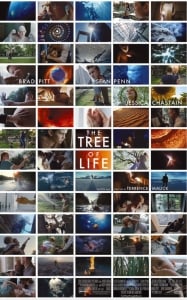 Terrence Malick’s The Tree of Life is the ne plus ultra of modern-day art cinema self-indulgence. It happens to also be a masterpiece, but because it seems to understand itself as such, that can be hard to accept, certainly by a media critic intelligentsia more fixated by the day on valorizing the popular and eliminating any and all aesthetic elitism. It doesn’t help that the film was followed by three more—To the Wonder, Knight of Cups and this year’s IMAX doc Voyage of Time—that doubled-down on The Tree of Life’s lyrical photography, elliptical structure and cryptic narration, some might say to the point of self-parody.

In retrospect, it isn’t the prehistoric reveries, featuring practical effects by Douglas Trumbull (of 2001: A Space Odyssey), that stand out. Rather, it’s Malick’s obsessive attention to emotional detail in his portrayal of postwar Texas childhood, captured by a restless pirouetting camera: the caress of Waco winds, the blank stares of veteran amputees, the overheard dinner-table ire, the tears of pain when roughhousing gets too rough. Malick’s style taps into an elemental dimension of this lived experience that, despite its specificity, confers a cosmic significance upon it, with or without Trumbull’s psychedelic imagery. – Benjamin Aspray