October 26, 2020
Home Film Revisit: Dr. Strangelove or: How I Learned to Stop Worrying and Love the Bomb

About 10 years ago, I showed Dr. Strangelove to a group of my high school students but didn’t tell them that the film was a comedy. I was teaching in rural New Hampshire and none of them had heard of either Stanley Kubrick or his satire about the anxieties that surrounded the Cold War. As the film progressed, the students giggled nervously and eyed one another. Should we be laughing about this? their expressions read. By the time Slim Pickens took his iconic ride on the back of a nuclear bomb as it plummeted to the earth, most of the students cheered. Finally, one girl who wasn’t in on the joke shouted, “Why are you all laughing? There is nothing funny about nuclear war!!”

Kubrick and Dr. Strangelove demonstrate that sentiment isn’t true. When Kubrick initially purchased the rights to Peter George’s 1958 novel Red Alert, he planned to make a very serious film about the perils of the arms race escalating between the United States and Russia. At some point, the director decided to scrap a conventional approach to the material, contacting writer and humorist Terry Southern to help him change the script into a satire. A fine line exists between horror and comedy, and Dr. Strangelove remains a very tense film despite many of the ridiculous and hilarious moments that punctuate its slim runtime. However, changing gears was one of the best decisions of Kubrick’s storied career.

Despite the film being 53 years old, the hawkish generals and ineffectual politicians that Kubrick and Southern lampoon in Dr. Strangelove are still the type of people who run our military and government. In a world where Donald Trump can ascend to the presidency, the expediency and sardonic tone of Dr. Strangelove still pertains. Just read the news. The CIA claims that Russia hacked and influenced our presidential election. Trump denies the charges, despite evidence proving otherwise. A Hillary Clinton win would have shattered the so-called “glass ceiling,” a step away from the boys-club that runs Washington. That didn’t happen. 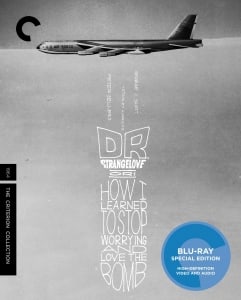 Dr. Strangelove opens with an aircraft refueling scene that emulates sexual penetration and ends with a plan that pairs each of the surviving politicians and military men with 10 attractive women in an effort to re-populate an Earth decimated by nuclear war. There is something inherently phallic about bombs and guns anyway, and Kubrick has no problem digging deep and attacking the schoolboy anxieties that drive most men. Opponents of Clinton joked that a woman president would be scary during her monthly period. Meanwhile, Kubrick gamely points out that men make many decisions with their dicks. The whole crisis in the film begins when a general, terrified by the sense of relaxation that follows ejaculation, sets into motion the events that draw the United States into a nuclear conflict with Russia. Imagine what a guy who is worried about the size of his small hands might do.

So why are we still here? How are the same types of people still running the show? Peter Sellers’ President Merkin Muffley is an effete pushover who is bullied by the more masculine advisors that surround him. Balding, bespectacled and more intelligent than most, Muffley is the wimpy liberal struggling to navigate a room full of red meat. One of the funniest scenes comes when he tries to break the news to the drunken Russian Premier over the telephone of the inadvertent nuclear attack. Donald Trump would likely insult the man, call him a “clown” or a “pussy.” Muffley stumbles over himself in apology.

The type of man that Kubrick skewers here, the type who would likely applaud a Trump presidency and would want to Make America Great Again, is personified by General Buck Turgidson, played by George C. Scott in what is most likely the best role of his career. Turgidson, a nostril-flaring hawk who wants nothing more than to engage the Russians in war, could easily be Stanley McChrystal as he stalks around the War Room and applauds the ultimate plan for the leading elite to retreat into mining tunnels, a bevy of supple women to impregnate in tow. It would be comforting if Dr. Strangelove was merely a fantasy, but satire hews close to reality and men like McChrystal are and have been in positions of extreme power.

Donald Trump has yet to be inaugurated as the 45th president of the United States and already Dr. Strangelove feels more relevant than ever. When a team of men with fragile egos, itchy tempers and little regard for others is running the country, the daily news begins to play out like satire. There are dark times ahead for us all as health care, the environment and our civil rights exist on the edge. Stanley Kubrick and Dr. Strangelove prove that when you’re looking into the abyss, do not flinch, do not shy away. Stare at it and laugh, and somehow it will all be okay.