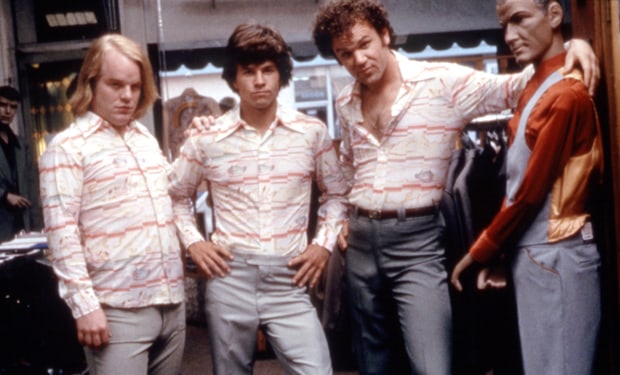 Boogie Nights consists a handful of incredible scenes stitched together by a straightforward and conventional plot about a group of outcasts creating an alternative family among themselves.

Twenty years on, Boogie Nights remains a brash statement of purpose from perhaps the greatest American filmmaker of his generation. Paul Thomas Anderson, harboring hard feelings from studio executives’ overeager editing of his feature debut, Hard Eight, utilized Boogie Nights to not only cement his status as a wunderkind—he was only 27 when it was released!—but also to joyously hoist his middle finger in the direction of the Hollywood establishment.

This is a virtuoso film, with a maniacally whirring camera, an epic soundtrack and a superstar cast. But it is, at its very foundation, the execution of an arrogant dare on the part of Anderson; it is the fulfillment of a put-up or shut-up challenge, par excellence. After Boogie Nights, Anderson personally recruited Tom Cruise to star in his next film, spent a season writing for “Saturday Night Live” and made a drama starring Adam Sandler. In other words, Boogie Nights was a career-making manifesto that allowed its uber-talented creator to do whatever he pleased.

But the odd thing about this film is that it is no masterwork of cinema. Certainly, it has wondrous component parts. The narrative is audacious, setting up an alternative film history through an industry parallel to the Hollywood system. The tracking shots, particularly the one opening the film, are extraordinary. And, as others have noted, no film has done a better job of pairing music and dialogue. Even with all these positives noted, Boogie Nights really consists of a handful of incredible, unforgettable scenes stitched together by a straightforward and conventional plot about a group of outcasts creating an alternative family among themselves.

The bravura scenes that made the film famous really do establish Anderson as a singular filmmaking talent. The introductory Steadicam shot at Hot Traxx is breathtaking and instantly shapes the film’s atmosphere and energy. The pool party is hilarious, with Dirk Diggler (Mark Wahlberg) and Reed Rothchild (John C. Reilly) ensconced in their own absurd realm, competing for the best diving board performance, while a who’s-who of Los Angeles pornography engages in all sorts of bacchanalia all around them. Little Bill’s (William H. Macy) murder-suicide is captured with another expert tracking shot. The donut shop scene, the failed drug heist at Rahad Jackson’s (Alfred Molina) house and on and on; the quality of these seminal scenes is undeniable.

In fact, the film’s entire first act is near perfect. The characters are established, the rather boring central plot is put in motion and the pacing is delirious. What makes the first act stand out, however, is that Anderson nails all of the details—the one burned-out bulb in Diggler’s “studio” as he prepares for his debut sex scene and Scotty’s (Philip Seymour Hoffman) uncontained exuberance while holding the camera for that scene, for example.

Unfortunately, after the first act, the details become less important because there is so much plot to get out of the way. Characters clash, crash and reconcile and there are just too many things happening. Because of this inattention to detail, the increasingly lengthy interstices between Boogie Nights’ truly transcendent scenes become harder and harder to bear. The film drags in its latter half to accomplish all the plot machinations, messing with the pacing and touches of life that made the first act so excellent.

It may be sacrilege to posit such a thing given the film’s origin story, but Boogie Nights could have used a more heavy-handed editor. Even so, it still established Anderson as a meteoric prodigy and a canonical auteur whose films simply cannot be missed.