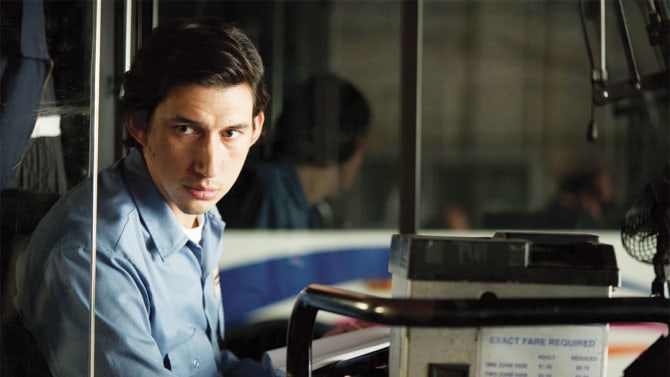 Much of Paterson’s charm lies in its bustling sense of community, one filled with a refreshing diversity and a sense of cordiality that’s often lacking in the modern day.

Jim Jarmusch’s latest exercise in vivid minimalism seeks out poetry in the mundane. Through artful repetition and meticulous attention to pacing, imagery and structure, Jarmusch follows a week in the perfectly ordinary life of Paterson (Adam Driver), a bus driver in a New Jersey town of the same name. He wakes promptly at the same time each morning without the need for an alarm, kisses his sleeping wife, Laura (Golshifteh Farahani), eats a mugful of Cheerios and walks to work. Before he pulls his city bus out of the garage, Paterson makes a point to scribble down a few lines of poetry in his “secret notebook,” which he won’t even allow his supportive wife to crack open. Before driving his route, which allows him to overhear the unique conversations of his passengers, Paterson writes poems about things as simple as the particular brand of blue-tip stick matches that he favors and as complex as theories about time and space. At night, he eats dinner with the free-spirited Laura, walks their bulldog and stops off at a local watering hole for exactly one beer.

That’s pretty much it. What Paterson lacks in dramatic turns of plot, it makes up for in an earnest and artful approach to the quotidian. Through Jarmusch’s lens, we are privy to the meaningful coincidences and disconcerting inconveniences that take on added significance through subjective experience. Paterson begins seeing various sets of twins as an almost daily occurrence, reinforcing the pleasantly repetitive nature of his life, where one day bleeding into the next isn’t oppressive but, instead, comforting in its familiarity. He embodies the proverb of still waters running deep, taking Laura’s shifting priorities and dreams—one day she wants to open a cupcake business, the next she aspires to become a country music star—with understated support, and even disruptions to his routine, such as his bus breaking down mid-route, doesn’t frazzle him all that much.

Much of Paterson’s charm lies in its bustling sense of community, one filled with a refreshing diversity and a sense of cordiality that’s often lacking in the modern day. In breaking with 21st century norms, Paterson refuses to carry a cellphone, considering it an unnecessary leash (even as it causes him some inconveniences), and this allows him to chat with an adolescent aspiring poet, a Japanese tourist and an African-American man rapping in a laundromat, unnecessary yet engaging conversations that have become almost extinct in the digital era. But it’s the tender and banal interactions between Paterson and the Iranian-American Laura that gives the film its heart, as they support each other’s interests and hobbies while also allowing space for individuality. During the week depicted here, they don’t have sex and they don’t fight, but they share life together while expressing passions through their various channels of their creativity.

Despite its setting within a city, Jarmusch’s film finds nature imagery within municipal parks and through sunlight and the movement of water to derive a sense of the pastoral even amid an environment dotted by city buses. Through Laura’s fixation on black-and-white patterns—painting them on everything from the curtains to her own dresses—the director infuses Paterson with distinctive color schemes that add aesthetic vigor to cinematography that would otherwise depict nothing more than a routine conversation by a married couple as they eat brussels sprouts. Jarmusch adds further visual verve when, as Paterson ruminates on a new poem, his written words scrawl across the screen. And there’s plenty of winking references as well, such as a copy of Frank O’Hara’s Lunch Poems tucked away in Paterson’s lunch pail or the presence of actors Jared Gilman and Kara Hayward, the awkwardly romantic teenage runaways from Moonrise Kingdom, discussing heady issues together on the bus.

For fans of poetry, frequent references to William Carlos Williams (who wrote an epic poem about Paterson, New Jersey), Allen Ginsberg (who grew up there) and O’Hara offer esoteric pleasures, and witnessing Paterson’s creative process can be an intimate joy. But Paterson isn’t only for those in the know; it’s truly an everyman film, one that finds profundity in its relatability and inspiration in simplicity.