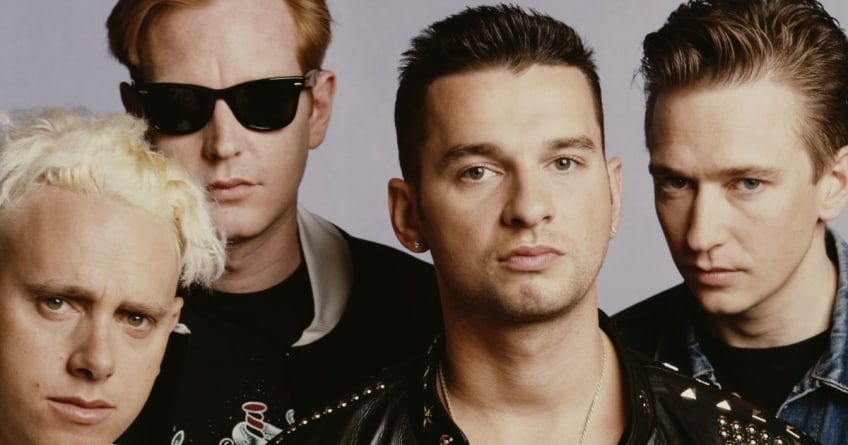 We sat down with the new 3-DVD Video Singles Collection in two sittings. Spanning four hours, we learned a few things about Depeche Mode. Firstly, they started as children. David Gahan and Martin Gore have an incredibly malleable look, and age at different rates. In the early videos, Gahan was 19, but looked closer to 14. And as we progress through the videos, Gahan’s look changes wildly, as does Gore’s penchant for more and more bondage wear. (The other members of the band had less of an impact, and mostly looked like dudes who hung out with Gahan and Gore from an office party.)

Secondly, there are some common thematic elements, especially in the early videos. 1) Young Depeche Mode likes to hit things with sticks, hammers and just about anything. 2) They have a thing for cars. 3) Gahan likes to spin on stage, often shirtless. 4) TVs and projections, especially of the band members lip synching the words, are also common.

The early videos are typical of a nascent technology: in the early ‘80s, music videos were a new art form. Much like GeoCities was to the internet, these early videos are similarly chaotic, incoherent and nonsensical.

As the band matured, they began working with directors who were also more mature. This started to become more noticeable as Clive Richardson’s chops improved and when they started working with Anton Corbijn, who prefers black and white. We still found it funny that the obvious video themes, especially for a band obsessed with cars, were overlooked. “Behind the Wheel” is a prime example: it took place on a scooter most of the time.

Another thing we noticed was that in many bands’ careers, the hits and “good” material tend to be front-loaded into the earlier years. We were surprised to find that even in 2013, the caliber of Depeche Mode’s work was still quite high. The best video in the set was “Wrong,” which was released on the 2009 Sounds of the Universe album.

At times, the videos were plain yet the song was strong; the converse was true, especially for “Fragile Tension,” which was a stunning video but a less memorable song.

Revisiting Depeche Mode in this way invigorated us to re-listen to their entire catalogue, from front to back. All in all, whether you’re a hardcore fan or a more casual fan, there is something for everyone in this release. Plus, it’s a lot of fun to watch the band morph, change and age.

Gay boys take a break from dancing at a gay nightclub, head downstairs and find a camera crew. A 12-year old Gahan sings into a tiny straight mic. The director is obsessed with close-ups of keyboards–it isn’t as interesting as he thinks it is.

(Note on the director: Richardson worked with Siouxsie and the Banshees, Tears for Fears and Steve Winwood throughout the ‘80s. That doesn’t make this video any better, but it is notable.)

See You (1982) Directed by Julien Temple

The photo booth from Amélie is the setting for the first verse. Walking though malls, we see all sorts of very ‘80s hair and fashion. And Gahan’s nose ring plays a prominent role in how alternative Depeche Mode is!

(Note on the director: Temple began his career shooting a Sex Pistols documentary. Besides directing music videos, he also directed Earth Girls Are Easy in 1988.)

The Meaning of Love (1982) Directed by Julien Temple

A children’s book comes to life. The saccharine pop and children all create a bit of a surrealistic and creepy video. There are shiny streamers and multiple keyboards.

A conveyor belt of useless items scroll in front of the band, and they hit things with mallets; there are Gallagher-esque close-ups of fruit being smashed and Jell-O jiggling. Confusion arises about Gahan’s choice of baby-blue Colonel Sanders bow tie with a patterned shirt. The effects are so bad that it is often hard to understand what is even happening.

Get the Balance Right (1983) Directed by Kevin Hewitt

The band infiltrates an arcade and carnival. Droog-like characters and lab coats imply that our lives are being controlled by our other selves in a control booth? The balance is not right in this video.

(Note on the director: This seems to be the only thing Hewitt ever directed; we cannot find any more credits for him. There was an English Hewitt who died after becoming a ringmaster at the circus. Given the setting, it is likely this is the same person.)

Everything Counts (1983) Directed by Clive Richardson

Xylophones and oboes introduce three-part harmonies done like a video version of a middle-school class photo. The cityscapes are overlaid with dancing band members. We have no idea where they are or why they are where they are.

Love, In Itself (1983) Directed by Clive Richardson

Gahan now looks like a cross between Corey Feldman and Corey Haim. Set in a cave, the rest of the band is either dressed as a fetish dungeon master or khaki-boardroom members. Inexplicably, there is molten metal and hot blocks of metal serving as subject matter near the end of the video.

The maturity of this video is notably better than past; refracted images of the band members are interspersed with war imagery and propaganda black-and-whites. The rest of the verses take place on board a warship. For a song about peace, there is certainly a lot of war imagery.

Chain swings imply naughtiness; overlaid imagery of boring political process give a slight zing on how many of us are servants to our overlord masters. All the different ways we’re owned play their part here: marriage, capitalism, sexuality, biology. This is deep.

An underground club displays a slightly dystopian stage setup that includes hammers on sheet metal, which seems to be a theme in these early videos. It seems that they’ve finally come into their element here, though: The band members actually look like a cohesive team and the song is just. So. Good. The strength of the song makes us forgive anything awkward about the video.

Somebody (1984) Directed by Clive Richardson

Martin Gore leads vocally in this piano-based ballad with a heartbeat-drum track. The video evokes loneliness and doesn’t try to do too much. And the song doesn’t really do much either.

A Trainspotting-like apartment sets the scene for close-ups of the band alternately singing and randomly falling to the left of the screen. Yet again, the strength of the song forgives Gore’s decision for frizzy hair and no shirt whilst wearing a leather jacket. Percussion on corrugated metal reveals the source of electronic-sounding noises that apparently aren’t electronic after all.

(Note on the director: Peter Care began his career working with Cabaret Voltaire, but ended up working with dozens of bands, including R.E.M., Tina Turner, Simply Red, Killing Joke, PIL and Fine Young Cannibals. He earned a lifetime achievement award from MVPA in 2005. He also directed an Episode of “Six Feet Under.”)

This video starts out as chaotic voodoo ritual in a cornfield at night. Between xylophones, bells and drums, there’s plenty of stuff to hit with sticks, which continues on Depeche Mode’s theme of hitting and smashing stuff. Why this features a floating television of Chinese propaganda is not well understood.