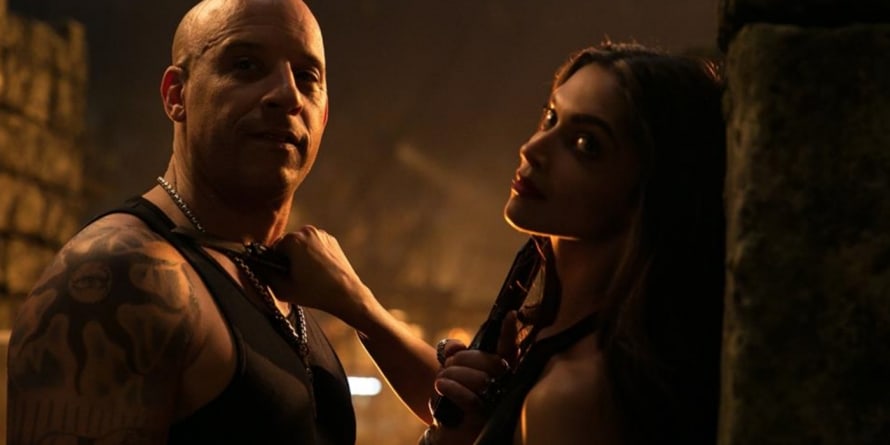 It’s as if slapping on that signature red neck tat regressed Diesel’s talents to the days of Linkin Park, JNCO jeans and Mountain Dew Code Red.

It’s been 15 years since Vin Diesel’s turn as “The X-Games James Bond” Xander Cage. In the ensuing time, Diesel’s become a movie star par excellence, anchoring the most important action franchise in the world. When his return to the series was announced, it was expected that he would bring his experience and charm from the Fast & Furious films, but, somehow, the final product feels like the polar opposite of what makes that mythos so iconic and lovable. It’s as if slapping on that signature red neck tat regressed his talents to the days of Linkin Park, JNCO jeans and Mountain Dew Code Red.

As the film begins, Augustus Gibbons (Samuel L. Jackson) the head of the XXX program, is out recruiting more extreme athletes for his absurd spy crew, when a satellite crashes out of the sky and blasts him to smithereens. Jackson dies faster in this than he did in Deep Blue Sea. He’s on screen for less time than when he tried to rob McDowell’s in Coming To America. But before passing on, he gives a speech equating the modern geopolitical landscape to the movie Dogtown & The Z-Boys, expounding on how the old ways of espionage are obsolete in this new world and only special people, like footballers and graffiti artists, can keep us safe. This brings his original recruit, Xander Cage, out of hiding to find the crew who killed his dysfunctional mentor.

In the original XXX, this premise was delightfully tongue in cheek. Watching Cage outsmart professionals with his street level intelligence and dedication to doing ape shit was entertaining. This was the man who said “stop thinking Prague police and start thinking Playstation!” before firing a bazooka. After a decade and a half of the Bourne franchise’s depressing influence on the spy genre, Xander Cage’s return should be a welcome breath of fresh air at the multiplex, but the movie has serious difficulty striking the right tone. At times, it reaches the right mixture of playful and intense, but in most others, it’s woefully dumb. Not the sincere, knowing idiocy the Fast films so successfully couch within heart and globalism either. We’re talking Paul Blart dumbness.

The closest stylistic touchstone that comes to mind is Suicide Squad. This film suffers from the same frenetic, ill-advised trailer house editing and a pace that dwells more on cutesy, inefficient character introductions than the necessary escalation of tensions. They even crib the freeze frame cut scene, new player bio screens when a new cast member debuts. The length of the film where Cage puts his own crew together lasts a lifetime, and none of his teammates make much sense. Outside of Adele Wolff (Ruby Rose), who’s an expert marksman, the rest of his crew is just a DJ with moderate hand to hand combat skills and a conspiracy theorist with a car crash fetish.

Their relative inadequacy for spy ops would be less bothersome if Cage didn’t constantly espouse how much more valuable they are than trained soldiers. There’s a scene that feels like a rehash of Bruce Willis insisting his team of oil men were better suited to saving the world than actual NASA astronauts in Armageddon. The only real mission they go on in this movie involves them infiltrating a giant party on an island and, even then, it’s just a pretense for exposition rather than an actually exciting set piece. The movie is supposed to function around the idea of extreme athletes and rebels doing the job that trained company men can’t, but there’s not enough examples to make this anything but laughable.

Exacerbating this is the team of antagonists Cage and his cohorts are up against. While Cage recruits a cast of weirdos you wouldn’t trust to win a game of kickball, let alone capture a techno-terror MacGuffin, the opposing side has both Donnie Yen and Tony Jaa! In what world can an audience be reasonably expected to root for Vin Diesel in an oversized fur coat over two of the most entertaining martial artists in the world? This becomes even worse when you discover that this crew of villains is really an parallel XXX crew being set up for Gibbons’ death.

Xiang is uniquely compelling, aided by Yen’s preternatural proficiency in hurting people and his world-weary charm. He’s ten times more over it than his character in Rogue One was, a man for whom thrill seeking has become a full-blown death wish, a soldier who’s fought in more wars than he’d care to tally. He’d make for an excellent foil to Cage, if Cage were anything more than a muscled bundle of poorly written one-liners and sexual come-ons. The hard truth is Xander Cage isn’t even one tenth the protagonist Dominic Toretto has been for the last fifteen years.

Where Toretto is stoic, paternal and charming, Cage is bland, fractious and lacking in any kind of growth. The character seems a step or two behind who he was in the original film and, even then, he was more a sketch on a dinner napkin than a real finished product. It’s easy for supporting characters (among them Nina Dobrev as Becky, a spunky Q and Ice Cube, briefly reprising his role from XXX: State of The Union) to overshadow him. Also, kudos are in order for Toni Collette as the film’s untrustworthy suit. She this movie’s Joan Allen in the Bourne flicks, reminding everyone how gifted she is despite being given so little to work with.

There’s still a chance this franchise can be salvaged. When the action is on, it’s really on. It’s hard to argue with the brazen absurdity of Vin Diesel skiing through a jungle, or surfing with a BMX bike. Director D.J. Caruso has been devolving as a visual storyteller since Eagle Eye, so sometimes his approach to kineticism bleeds into incoherence, but his style is flashy enough to distract from how first draft-y the shit script is. If Diesel still wants to get the XXX films in formation with Toretto and the gang, he should hire Fast scribe Chris Morgan and find a filmmaker on the same wavelength. Maybe call the Rock, too. It couldn’t hurt.