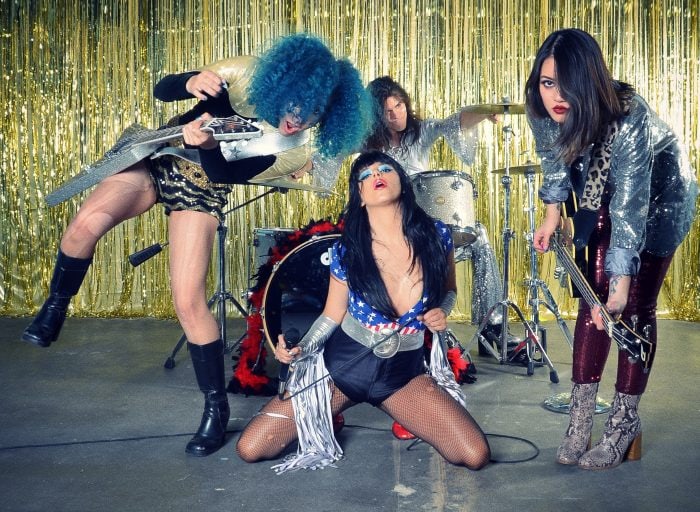 Los Angeles rockers Glam Skanks have been tapped to open for Adam Ant this winter as he tours the United States on the 35th anniversary of Kings of the Wild Frontier. The four-piece channels the stomping rock of T. Rex and the glam sensibility of early-‘70s David Bowie. Their debut album, Glitter City, sounds like it’s from another era full of catchy hooks, big melodies and stomping rhythms.

Lead singer Ali Cat and guitarist Veronica Volume (who goes by V.) called me early one morning to discuss the tour, Bowie and taking back the word “skank.” I’m pleased to present the Spectrum Culture interview with Ali Cat and V from Glam Skanks.

You guys were tapped to open up for Adam Ant on this upcoming tour (playing Kings of the Wild Frontier), which is pretty awesome. How did that come about?

V: The tour came about because my dad (musician and producer Bruce Witkin) has known Adam since before I was born. He used to tour in Adam’s band in back in the early back in the early ‘90s and he used to open up for Adam at the same time. He played on his album Wonderful. (Adam) has been a family friend for my entire life and when he was shown our videos to see if we would work to open up for him, Adam liked our videos enough to want to take us along with him.

Are you guys fans of Kings of the Wild Frontier?

V: That’s such a great album.

Yeah, everyone is always so focused on the drumming when they talk about that album, but I think the songwriting is pretty awesome too.

V: Yeah, his songs are amazing. I love all his music.

Your dad has been in the music business your entire life. Do you have any cool stories from when you were young?

V: Yeah, I actually have some really interesting stories. My dad has worked with some really cool people. One of my earliest memories of him taking me into that world was when him and Adam played on the “The Tonight Show” in ’95 back when Jay Leno was hosting. I got to meet Jay and see how everything worked. That was really cool.

And having people like Joe Perry showing up at your house was the normal when you were young?

V: What’s crazy about Joe Perry is he didn’t start working with my dad until about five years ago. I grew up worshipping him and Aerosmith so to now see him show up at my dad’s house is really weird because I had grown up admiring him for so long (laughs).

Do you ever worry about forging your own path in the music industry away from your father’s influence?

V: I’ve never really had too much of an issue with that. He’s been so helpful with everything. Because he and I play such different music and different instruments I never had to live in his shadow in that way. He’s always allowed me to be the kind of musician I want to be. I never felt that sort of pressure on me, which is nice.

I checked out your LP, Glitter City, and think it’s pretty great. It throws back to sounds of T. Rex and Bowie. Why do you think glam rock still speaks to people? I’m not sure how old you guys are, but I’m sure you weren’t around in the early ‘70s when that music was popular.

A: I think because it’s super real and authentic to us. It’s unique and fun.

V: It’s so visually so eye-catching and entertaining that no matter what the music is behind it, people will gravitate towards it.

A: It stands out.

Do you think glam can exist without all the make-up and costumes? Or does that go hand-in-hand with that type of music?

Speaking of Bowie, you guys cited him as one of your major influences. Did you ever get to see him?

Off the top of your heads, what are your Top Five Bowie songs?

A: “Moonage Daydream,” “Lady Grinning Soul,” “Cracked Actor,” “Starman” and all of the albums! I don’t’ even know.

A: Yes! It’s basically all the songs off that album.

V: Mine would have to be “Life on Mars?” That’s my all-time favorite song. I’m also going to go with “Moonage Daydream.” That’s just great. “Rock ‘n’ Roll Suicide.” “Queen Bitch.” There are so many but I want to turn it around and say, “Fame.”

The term “skank” can be considered a derogatory term for women. How do you define that word?

V: I don’t necessarily define it any differently than other people. I think we wanted to take it back, like the way “bitch” is used. How women are taking back these sort of derogatory terms. When you look at it this way it stops being derogatory. When you can proudly proclaim that you yourself are that, you kind of take its meaning away.

Can you think of a situation where you’ve called someone a skank and meant it?

A: Not really. It’s not really that crazy of a word to me. Really Glam Skanks is the image and obviously we are not skanks. The fact that it’s glamorous and skanky is how we dress and our attitude on stage.

Yeah, it’s difficult sometimes to imagine rock stars who wear makeup hanging out in sweatpants outside the job.

Do you or don’t you guys live the image you project on-stage in your real lives?

A: Well, right now I’m in pajamas (laughs). We have jobs where we can’t dress up like we do on-stage.

V: I have to wear a uniform at my job, so there’s no way I’m looking like that.

A: And I work with kids. It’s a little different. I really have to wear a lot of clothing (laughs).

Do the kids you work with know about your band?

A: Oh, no. They are literally four-year-olds. I tell them I am a singer but I don’t know if I want their moms to know.

I’m really looking forward to your show. What should we expect?

A: We’ll probably be playing all the songs on our record and we have a cover song that we’ve recorded that people will probably like.

V: We may throw in some stuff from our first EP and some other covers depending on the night. We’ll probably switch it around every few days.

If Adam Ant would invite you to join him on-stage for one song, what would you hope it would be?

V: I have this certain sentimental feeling towards “Wonderful” because my dad played on that song. There would be a full circle moment there for me. It would be pretty cool.

Catch them on tour with Adam Ant: