Malick takes aim at a much-romanticized period in American history and filters it through a Romantic lens.

The New World (2005) exists, for many, a curiosity huddled between the twin sequoias of Terrence Malick’s filmography, The Thin Red Line (1998) and The Tree of Life (2011). Coming after a 20-year absence from the screen, The Thin Red Line is an adaptation of James Jones’ novel about the horrors of World War II, set in the South Pacific. Here, Malick stretched the style he began to develop with Badlands (1973) and Days of Heaven (1978) even further away from the linear, telling the story of his soldiers with whispered voiceover and haunting images of nature. The New World, which tells the story of the settlement of Jamestown, pushes that style further into the abstract.

Is there a filmmaker more American than Malick? Yes, Martin Scorsese comes to mind, but he operates more or less in one milieu. Malick’s films gaze into the heartland, our conflicts overseas and into the lives of the typical American family. The New World is Malick’s story of Genesis, America at the dawn of colonization and its inevitable tumble from the Garden of Eden as war, disease and madness began to take hold. Malick elevates his film via one of the oldest legends to escape the primordial ooze of nascent America, the romance between John Smith (Colin Farrell) and Pocahontas (Q’orianka Kilcher). Eschewing the naivety that plays out in the Disney adaptation of the tale, Malick portrays Smith and Pocahontas (who is never mentioned by name) as an Adam and Eve of sort, playing and canoodling in a world of perfection, just before the Fall. The Powhatan princess saves Smith from execution after he is captured by her people. Soon, he lives amongst the tribe, learning their words and customs. These are halcyon days for the couple, but we all know that Eden doesn’t last forever. 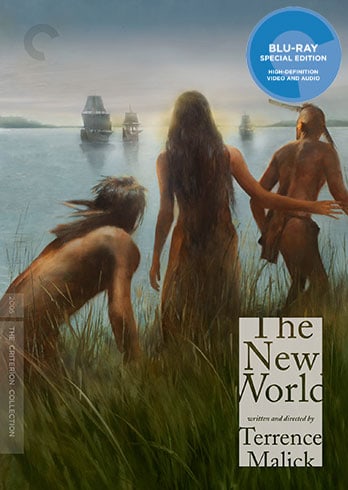 Malick’s original 172-minute version, available for the first time on the Criterion Collection, is more languid and intentional than the 135-minute incarnation released in the theaters. We get to witness more of how Smith relates to the Powhatan during his absence from Jamestown. It only makes the impending conflict even sadder, especially when we learn that while Smith is cavorting in this world of plenty that his comrades are starving and killing one another within the imposing walls of the colony. When he does return and briefly assume command of the colony, there is no longer room for romance.

Malick isn’t interested in traditional storytelling and much of the plot requires inferring from the non-linear script. Both Smith and Pocahontas speak in hushed soliloquy, proffering existential query and wonder over quiet shots of the tributaries off the Chesapeake and its surrounding forests. But the verdant embrace of the first half of the film gives way to the scorched earth of warfare. When things get violent the lush beauty tumbles into a world of mud and confusion. As the tide turns, so does life for Pocahontas as she becomes a prisoner of the British. Gone are the revealing skins she wore with her tribe, replaced by the constrictive garments befitting an Englishwoman. As the story cedes from Smith to Pocahontas in the film’s second half, the fever dream of romance shifts into the staid mundanity of “real life.”

The New World could easily refer to the American colonies, but Malick slyly subverts that easy expectation when Pocahontas travels to England with new husband John Rolfe (Christian Bale), a wealthy tobacco farmer. Just how John Smith experienced the surreal dream of a new landscape in America, Pocahontas encounters the manicured and dreary world of royal courts and topiaries in her new home. As her romantic notions for Smith ebb away and the “new world” of Virginia bleed away into memory, Pocahontas realizes she is no different than the racoons and bald eagles brought across the Atlantic and kept in cages for the amusement of the king and queen. It’s no wonder she dies soon after, receiving license to return home only through death.

Malick would go on to make his defining film a few years later in The Tree of Life, but The New World is more than a warm-up for that masterpiece. Unfettered by the celebrity cameos that threaten to unmoor The Thin Red Line, Malick takes aim at a much-romanticized period in American history and filters it through a Romantic lens. We shudder at the power of a Malick film and on-screen his characters shudder at the power of nature. Pocahontas returns to the sublime only via the release of death. It’s a grand and terrifying statement in a career filled with many of them.