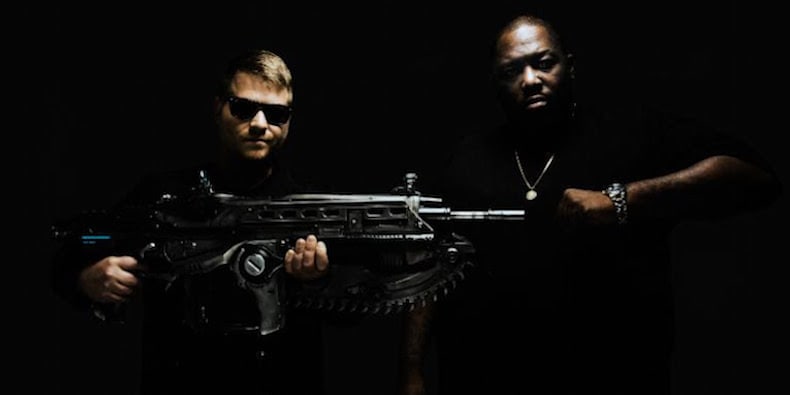 Run the Jewels is different than most rap music because it keeps it political.

“Let’s do like the Atlanta Falcons and fuck this shit up,” Killer Mike shouted to the sold-out crowd at Run the Jewels’ concert this week at Portland’s Crystal Ballroom.

Run the Jewels is a thing now. The collaboration between El-P and Killer Mike has always been a critical darling, but with the release of Run the Jewels 3 this year, the duo is playing larger concert halls and guesting on projects by the likes of DJ Shadow. With El-P’s hard-edged production and the righteous anger in the lyrics that fits right into the world we’re living in with a Trump presidency, this is as topical as it gets. EL-P and Killer Mike are putting the millionaires who run the country in the crosshairs and taking them down with some pretty timely rap music.

However, on record and in concert, Run the Jewels are two different animals, at least at the Portland show. Taking the stage to Queen’s “We Are the Champions,” Killer Mike and El-P quickly launched into new track “Talk to Me,” where they lay out their manifesto: a spiritual warfare on those who sacrificed our young men and women in the quagmires of Vietnam and those who now believe that #AllLivesMatter.

While the music on the record is intense, you can also make out all the intricacies of Killer Mike and El-P’s lyrics. At the show, the bass and strobe completely drowned out everything. Like completely. So Killer Mike might have shouted his Atlanta Falcons rallying cry. The only way I know is because a friend texted me after. And it looks like he starts a lot of the shows with the same type of slogan, swapping out the name for the local NFL club.

Run the Jewels is different than most rap music because it keeps it political, staying away from the girls, guns and money themes that often dog the genre. Yet, poor sound is a hallmark of many rap shows, especially those that don’t use live instruments. So while I could make out the crowd shouting, “RTJ” over and over, most of the time the lyrics and everything else were drowned out by bass.

The energy, however, was undeniable. There was something special happening between the two MCs—Killer Mike the imposing one, El-P the energetic one—and the adoring audience. El-P seemed genuinely surprised and touched that so many people turned out to support them. When the duo finally played “Close Your Eyes (And Count to Fuck)” during its encore, the room bristled with explosive energy.

Energy aside, it’s difficult to call the concert a success. When the booming bass and strobing lights undercut the most important thing, the music, I would say there is an issue. Just because Run the Jewels has gotten bigger, it doesn’t mean everything needs to get bigger. Next time, I’d like to hear what El-P and Killer Mike have to say. We all should.