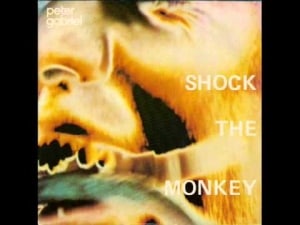 To talk about “Shock the Monkey,” one must talk about its visual impact. Its music video, a hit in the days when MTV would literally play anything so long as it was a music video, is one of the strangest things produced in the medium. Like most videos, it offers little in terms of narrative. Rather, it seeks to capture the mood of the song in a visual form. For “Shock the Monkey,” that means chaos, confusion and a sinister undertone creating an overarching sense of unease crafted by dark lighting and creepy face paint. It may seem campy now—what music video isn’t?—but this really pushed the boundaries at the time. However, the forward-thinking nature of “Shock the Monkey” reaches beyond its video clip.

For a song that could be interpreted in terms of the primal instincts of humanity, “Shock the Monkey” is a more cerebral piece of music than one would expect. Sampling and looping technology was fairly new in 1982, and the high hardware costs meant that proper digital looping (done here with a Fairlight CMI synthesizer) was a difficult feat to accomplish. “Shock the Monkey” is built almost entirely on looped samples, and it’s likely the first popular song that’s constructed that way. The end result is something hypnotic, its synthetic repetition the equivalent of the chant of a doomsday cult. It creates a tense atmosphere that grows and boils before erupting with Gabriel’s vocal histrionics at the end of the song, but even that doesn’t provide the catharsis it should; it doesn’t quiet the repeating synth theme, nor does it quell the mantra of “shock the monkey to life” that eventually closes out the song. “Shock the Monkey” may be one of the strangest artifacts of its time, but it’s also one of its most important. Few songs can claim to have opened as many creative doors as this one. – Kevin Korber 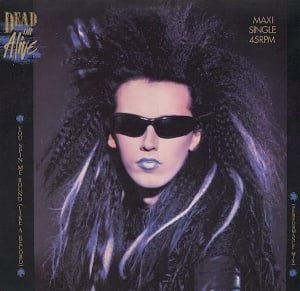 No decade has given the English-speaking world more larger-than-life pop songs than the 1980s, and “You Spin Me Round (Like A Record)” is one of the most indelible—a chorus so massive that not even Flo Rida and Ke$ha’s great 2009 rewrite “Right Round” could keep it out of our heads. Like Outkast’s “Hey Ya!” and its polaroid pictures, “You Spin Me Round” will live long after its titular technology fades into obscurity; when the current ironic cassette revival ends and hipsters start blowing all their money on CDs, “You Spin Me Round” will still blare out of bars and house parties. It’s hard to imagine this one ever going away.

That’s strange seeing as this is one of the darkest and freakiest songs to ever hit number one. It feels like a red light shining deep into the underbelly of black leather and disgusting sex. Pete Burns’ vocal is a mockery of every other new-romantic opera job in history; his vibrato almost equine, he tosses aside any ideal of vocal control and subtlety in panting animalistically after his lover. This might be the most frightening lead vocal on any hit that decade (save, perhaps, Tina Turner’s “Better Be Good To Me”), and if you know what Burns looked like, you know you’re dealing with real, gothic swag.

This was Dead or Alive’s breakthrough, in part due to the efforts of the unsung but ubiquitous Stock, Aitken and Waterman production team. The trio spent 36 hours on this thing; Waterman, a mild-mannered train enthusiast, did cocaine for what he claims was the only time in his life to finish the job. Listen to the relentless, hollow synths of the beat and you can see poor Waterman crazed, pupils the size of planets, unleashing himself on his instruments. Burns credits the team with bringing the sound of gay clubs to the mainstream with their work on the single. This statement sidesteps all of disco, but “You Spin Me Round” sure as hell sounds like the most nightmarish Cruising leather fantasy imaginable. This is the kinkiest thing you’ll ever find playing at a frat party. – Daniel Bromfield