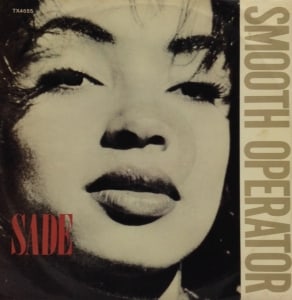 This many American psychos and Wall Street wolves later, we can tell just what kind of “Smooth Operator” Sade’s singing about. He’s a sharp-dressing, jet-setting heartbreaker, the kind of guy who now haunts Silicon Valley start-ups but back then got rich off the spoils of Reagan’s Wall Street. Sade, who seems to know him well, all but betrays he’s American; on the bridge, she lists all the places he’s come, seen, and conquered, and they’re all in the United States.

Sade sounds like she has no time to reminisce about jerks, least of all when they’re probably getting their game on in some penthouse as she sings. This is the calmest and coolest of all pop stars, the most detached diva of the 1980s. “No place for beginners or sensitive hearts,” she warns, and we get the sense she’s neither. No shortage of reviews has described her as the “Smooth Operator,” and here, they seem to be on equal footing, playing cat-and-mouse: “Face to face, a classic case,” she sings. “We shadowbox and double-cross but love the chase.”

Cautionary tales like this are common in pop, usually in the form of a man warning another man away from the woman who’s done him wrong. Anyone who’s been nuts about a man will enjoy the way Sade flips the script. Men really are just about the worst thing in the world, but it’s easy to forget in a moment of abandon, especially when they’ve got angel eyes like this guy.

“Smooth Operator” was written by Sade and Ray St. John, who no doubt keeps his kitchen well-stocked with sharp Japanese knives off the royalties from this song (he also had a hand in Snoop Dogg’s “Perfect”). St. John played with the singer in a band called Pride, which split when the band billed as Sade got more buzz. Yes, Sade is a band, too. But you’d never guess. – Daniel Bromfield

These San Francisco hardcore punks gave us one of the more timeless records of the ‘80s. How much more basic can you get than a punk song with an eight-word lyric about sex?

“Sex Bomb” was the band’s second single. With a simple bass line and riff that was as catchy as anything that came out of punk, it was an irresistible anthem and a curious anomaly: a party record from a scene known for austere nihilism. A taste of droning punk to come, the five-minute party ran much longer than hardcore conventions allowed. Flipper may have taken inspiration from James Brown’s classic “Sex Machine,” taking a groove already winnowed down to its funk essence and boiling it down to a single line. It’s all chorus and repetition, a closing montage of sirens, traffic sounds, screams and an abrupt ending suggesting a response to a raucous party – or to sexual violence.

This hooky hedonistic anthem may indeed be an indictment of hooky hedonistic anthems (beating Black Flag’s “T.V. Party” by a year), and the single’s B-side holds a mirror to its bro-friendly celebration. “Brainwash” is the dark side to this thrusting repetition, a 27-second track of the singer struggling to form a thought and resigning with a shrug, “Forget it, you wouldn´t understand anyway.” The track is repeated a dozen times before ending in a lock track. It’s potent, passive-aggressive punk, well-constructed and sloppy, experimental and simple at the same time. On its debut album Generic Flipper, the band took “Sex Bomb” even further, extending it to eight minutes and adding a saxophone solo to further the JB resonance.

Flipper’s largely slow-droning variety of punk influenced artier descendants like Nirvana (Kurt Cobain was known to wear a Flipper tee-shirt). In one of the most unlikely references in 21st century culture, the kid who plays Moose in the Step Up movies wears a Flipper logo shirt in the much-reviled Miley Cyrus vehicle L.O.L. (I have a screenshot if you don’t believe me). Moby claimed to have taken over for the band when singer Will Shatter was in jail, though Flipper denies that this happened. When one of the most commercial artists of his time makes up an incident about rescuing his favorite band in a pinch, you know it’s left a mark. – Pat Padua