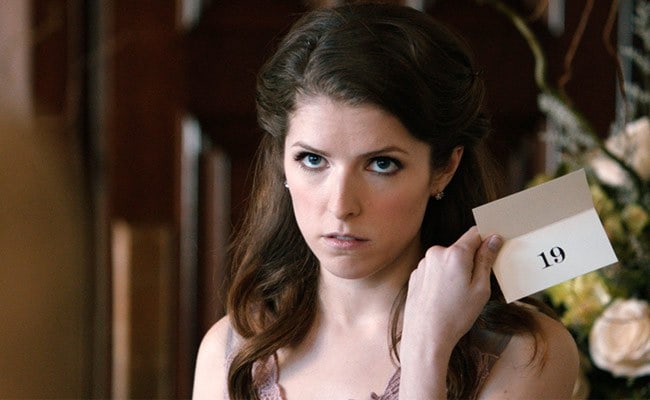 The kind of slight, mildly amusing story that the Duplass brothers could’ve knocked out on a cocktail napkin while half in the bag.

Table 19 contains the kind of slight, mildly amusing story that the Duplass brothers could’ve knocked out on a cocktail napkin while half in the bag. It’s basically The Breakfast Club, but with misfit adults at a wedding. Those seated at this unprestigious reception table come from different backgrounds and no one particularly wants to spend their Saturday there, but doggone it if they aren’t going to end up learning something about themselves in the process. There’s even the obligatory weed-smoking session to help this ragtag group really open up to each other and solidify their unlikely bond.

The best thing Table 19 has going for it is that its cast really does feel random. Anna Kendrick, Craig Robinson, Lisa Kudrow, Stephen Merchant and June Squibb are not exactly actors one would naturally expect to see featured together. Throw in Tony Revolori (Zero from The Grand Budapest Hotel) as a virgin wannabe-lothario with an overbearing mother, and let the laughs ensue, right?

Helmed by Jeffrey Blitz in his first feature since 2007’s Rocket Science (which helped launch Kendrick’s career), Table 19 may take an ensemble approach but it still hinges on the melodrama of Kendrick’s character, Eloise. She was once the maid of honor and had planned half the wedding, but after getting dumped by the best man (Wyatt Russell), she was deposed from her role and barely invited to the wedding at all. She’s seated in the back with married couple Bina (Kudrow) and Jerry (Robinson) Kepp, who sort of know the bride’s father through business ties; Walter (Merchant), a cousin of the bride who lives in a halfway-house after serving a prison sentence for embezzlement; Jo (Squibb), the wisecracking former nanny of the bride; and Rezno (Revolori), whose mom made him go because she figured he’d have a better chance at romance there than at his own junior prom.

While each character has their own issues to work through, the story is primarily Eloise’s. Soon, Blitz is cranking up the inspirational mandolin music to both bolster the film’s indie cred and signal a shift from pratfalls to drama about romantic entanglements. While Eloise told her table-mates that, after two years together, Teddy callously broke up with her via text message, it quickly becomes clear that it’s much more complicated than that, and in the most contrived way possible.

As the guests from table 19 ditch the party to smoke pot, roam the nearby nature trails and reveal deep truths about themselves to people they just met, we see the Kepps work through their passionless marriage, Jo provide sage advice and come to terms with her own mortality, Rezno deal with the fact he’s awkward with girls and, of course, Eloise wrestle with her increasingly messy situation with a little help from her newfound friends. Only Walter, gamely played by the perpetually smiling, bug-eyed Merchant, manages to stay light enough to avoid descending into sappiness—and as someone with a checkered past who is harmlessly buffoonish in his desperate attempts to appear normal, he’s also afforded the best gags.

Table 19 offers nothing new, and does so listlessly. The jarring shifts in tone from slapstick to maudlin melodrama seem to anticipate an audience with a Pavlovian response to sentimental acoustic music. The film’s third act is pure schmaltz, and everything gets tied together with a tidy bow. The talented cast does what they can with the Duplasses’ hackneyed script, but they can’t save Table 19 from being a big mess even before the wedding cake inevitably topples to the floor.