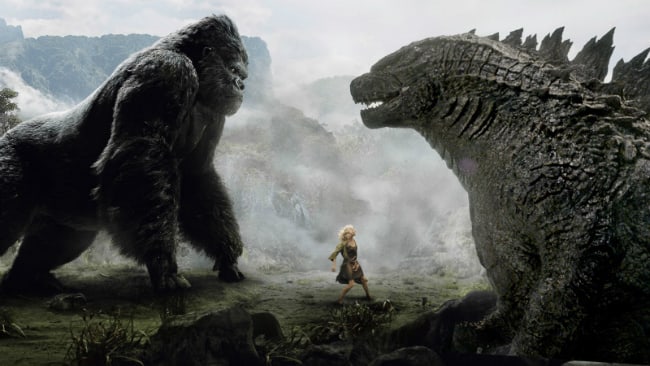 It’s not exactly fair to compare Kong: Skull Island to 2014’s Godzilla reboot. Though they both exist as the first chapters of Legendary’s new Monsterverse, they’re two different beasts. Where Gareth Edwards’ take on Japan’s greatest monster went for a more artful, atmospheric take on disaster and spectacle, Kong goes in the opposite direction. There’s still foreboding and tension, but the film wastes no time giving you an eyeful of the big monkey before spending much of the two hour run time showing off brutal monster violence. If Godzilla was like sitting through a three course meal at a nice restaurant, Kong is biting into a big, sloppy burger, getting grease and ketchup everywhere and not giving a single fuck.

The film begins in 1944, with an efficient and thrilling set piece of two soldiers, one American and one Japanese, crash landing on Skull Island, dueling to the death before being interrupted by the vastness that is Kong. Fast forward to 1973 (through a pretty effective, history spanning credits sequence), where Bill Randa (John Goodman) manipulates his way onto a Landsat expedition to a mysterious island he and his organization Monarch are obsessed with exploring. This movie takes its time assembling various teams, from the military escort team led by Preston Packard (Samuel L. Jackson) to Tom Hiddleston’s tracker mercenary James Conrad to Brie Larson’s anti-war photojournalist Mason Weaver. The supporting cast is rounded out by a host of strong character actors, among them Shea Whigham and John Ortiz, making up for spartan characterization with a lot of reliable charm.

But they’re all just gristle for the mill. This is a movie about King Kong and the many otherworldly creatures that inhabit his homeland. No one is here for anything but graphic, CGI based bloodshed and mass scale destruction. Explosions. Stories tall spider monsters being cut off at their spindly stalk legs. Peaceful, lumbering buffalo giants being attacked by reptilian flying predators. Shit like that. That’s not to say the screenwriting team assembled here, including Nightcrawler’s Dan Gilroy, didn’t try to fill out the rest of the picture with substance. There are some semi-interesting attempts at social commentary, with the obvious Apocalypse Now allusions and heavy Vietnam implications of Packard trying to win a war against an unstoppable godlike juggernaut after being forced to abandon his mission by his country. It’s all well and good, but never does it attempt to overextend itself and overshadow the main attraction.

Kings of Summer director Jordan Vogt-Roberts really levels up here by eschewing any hint of subtlety and heaving himself headfirst into a chasm of overt directorial gimmicks and tricks. More than any recent big budget blockbusters helmed by indie auteurs, Kong feels like a kid having a lot of fun with the studio toy box. As the film progresses, the constantly moving camera and kinetic framing become something of a stylistic cudgel, bludgeoning the audience over and over again, but never do the proceedings devolve into incoherence. It’s an easy film to watch, if intermittently difficult for those squeamish filmgoers unprepared for the sheer brutality on display. The fights are bombastic and every sequence brims with suspense and tension.

Honestly, the film would be a little too harrowing at times if it weren’t for the welcome presence of John C. Reilley as Hank Marlow the WWII soldier from the film’s prologue who’s been stranded on the island for thirty years. Never before have Reilly’s dueling gifts for drama and comedy been so deliciously married in one performance. He’s the beating heart of Kong and an absolute delight in every minute of screen time he steals. Every cast member, save for boring Straight Outta Compton vet Corey Hawkins, delivers, but Reilly is the real star.