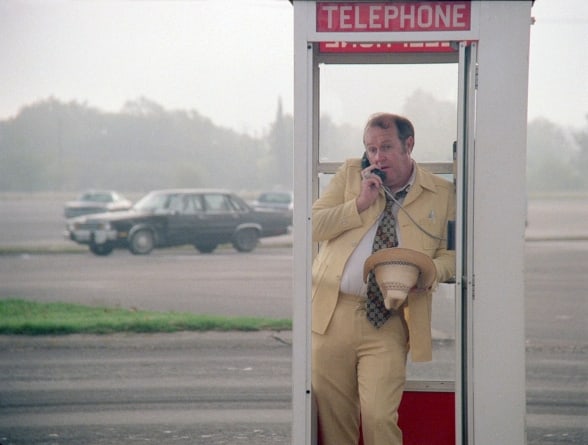 Like all the greatest film noir, time can’t erode this fucker.

Does anyone else besides me feel bad for Julian Marty (Dan Hedaya), the cuckolded husband in Joel and Ethan Coen’s debut 1984 film, Blood Simple? Yes, he is a complete asshole, mistreating his employees and wife, but does he really deserve the awful fate the prolific filmmaker brothers have in store for him?

Blood Simple introduces the deliberate, atmosphere-heavy type of film the Coens would be become famous for over the following decades. The eye for detail is exquisite, from the hypnotic drone of the ceiling fans battling the languid Texas heat, down to the diamond-studded horseshoe ring on Marty’s pinkie finger. The characters in Coen Brothers films exist in their own space and time, speak their own language. “The world is full of complainers,” M. Emmet Walsh’s unscrupulous private detective intones in the film’s opening voiceover, the only one in the movie. “But the fact is, nothing comes with a guarantee.”

Unless you’re reaching back to the tenets of film noir to make a film, that is. According to critic Nathaniel Rich, “The traditional noir hero is a decent moral man who, brought low by injustice or fate, turns toward criminality in a moment of weakness, in the hope of redemption.” But it never really turns out that way. In film noir classics from Rififi to Touch of Evil, an escalating series of crimes sucks the protagonist into a morass of hopelessness, a theme the Coens returned to many times throughout their rich filmography. 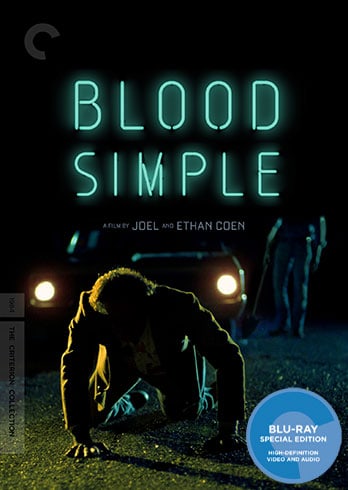 Here, the Coens introduce the world of Blood Simple (which means “crazed by violence”) in a series of images not uncommon in a film noir picture. An empty desert highway, lonely oil derricks, a couple on the run from some oppressive force. We first meet Ray (John Getz) and Abby (Frances McDormand in her film debut) as they consummate an affair. Abby is married to Marty, who owns the bar where Ray works. Pursuing the couple is Walsh’s unnamed private detective, a shoddy man in a too tight white suit who drives a rusted Volkswagen Beetle, hired by Marty who suspects that Abby is two-timing him. And who wouldn’t? Marty is a hirsute, sleazy and self-described anal-retentive who refers his wife as “an expensive piece of ass.” At first, Marty just wants the couple tailed. But his temper gets the better of him and following a failed attempt to reclaim Abby where she kicks him in the balls and breaks his finger, Marty hires the private detective to murder both his wife and her lover.

According to Rich, “all of the violence and death in Blood Simple derives from miscommunication.” It’s like an episode of “Three’s Company” where rather than eviction, death is the ultimate price waiting at the end of a series of misunderstandings. In the film’s centerpiece, Ray stumbles upon Marty’s corpse, assumes that Abby did the shooting and attempts to cover up the murder. This tense, agonizing sequence is among one of the best in the Coens’ oeuvre, one that ends with a malicious, albeit sad, twist.

Yet, Blood Simple isn’t a straight noir reboot by any means. A twisted sense of comedy, from the doll with the flashing nipples that adorns the rearview mirror in the private detective’s VW to the film’s delicious final shot leading into a call-back of the Four Tops’ “It’s the Same Old Song,” pervades the movie. There is also riffing on horror movie tropes from a knife jammed into a hand to McDormand emerging as the film’s “final girl” in an excruciatingly terrifying final sequence. For some reason, the Coens carry a reputation for being comedic directors, but take a closer look at their oeuvre and you will see even their lightest films contain touches of the horrific, from the villain shooting animals and then exploding in Raising Arizona to an ear being bitten off and spit out in The Big Lebowski.

By the time the dust settles in Blood Simple, most of its lead characters are either dead or dying. The surviving characters realize all the mayhem has spiraled out of a mistaken identity. It’s an auspicious, low-budget start for a pair of filmmakers that would go on to make some of the most beloved movies of all-time. Blood Simple ranks up there with the best of them. Like all the greatest film noir, time can’t erode this fucker.