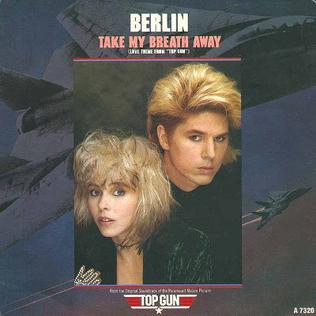 With the rise of MTV in the early part of the decade, the 1980s suddenly became the decade during which visual imagery became as important as and virtually inseparable from the music it accompanied. Whether in music videos or, more and more so, in film, sound and vision became the defining joint medium of the decade. Featured as part one of the more iconic moments from one of the decade’s most iconic films, Berlin’s “Take My Breath Away” soundtracked an awkward romantic exchange in silhouette between Top Gun stars Tom Cruise and Kelly McGillis – this despite the film’s otherwise rampant homoeroticism.

It’s also one of the most immediately identifiable songs the decade had to offer. All one needs to hear is those first five ascending bass synth notes to know exactly what the next four minutes has to offer. So intertwined are the song and the film that the majority of the music video is made up of scenes from Top Gun. In this, it’s the prototypical ‘80s movie song, right up there with “Footloose,” “Flashdance” and “In Your Eyes” in terms of inseparability from its filmic counterpart.

Featured on the band’s Count Three & Pray (1986) album, it represented a stylistic shift for the band, one that wouldn’t last beyond the success of this hit, with Nunn leaving the band for a solo career in 1987. A far cry from their more dance club-oriented early hits like the almost Kraftwerk-esque “The Metro,” “Take My Breath Away” is less emblematic of the group’s sound than a hauntingly beautiful outlier that also happened to become iconic and inseparable from the band itself.

Given its synth-heavy arrangement and production, it’s little surprise the song was penned not by a member of Berlin but early synth icon Giorgio Moroder. The song went on to win both an Oscar and a Golden Globe for Best Original Song in 1986, as well as going Gold and hitting number one in half a dozen countries. Yet it’s the iconic vocals that truly make the song. Vocalist Terri Nunn’s heavily emotive, haunting read of the rather clunky lyrics (“On this endless ocean/ Finally lovers know no shame”) has helped the song retain relevance well beyond that of the band’s first go-round (they would reform in 2000, releasing albums sporadically ever since) and be forever linked with the stylized softcore of Top Gun’s cringe-worthy “love scene.” – John Paul 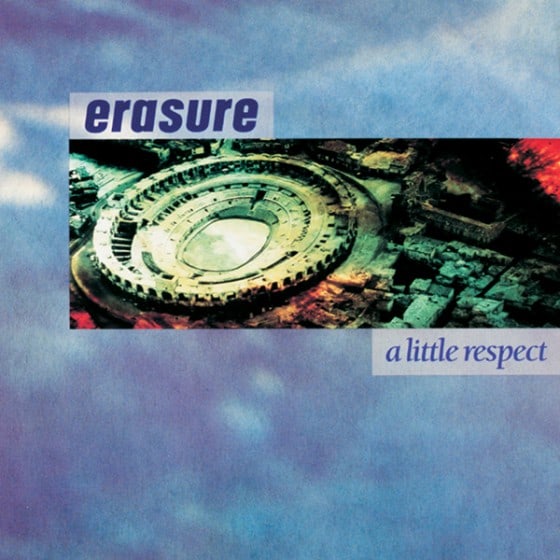 But this isn’t about sad sacks and shrinking violets. The words alone sound like eager pleading (Why you make-a-me work so hard?”), but the sound tells a different story: there is liberation to be found in the act of asking. Vince Clarke’s synth lines gambol while Bell’s vocals dart and dive. He traces the highs and lows of the delirium, delivering a falsetto in the heart of the chorus and dredging up a little bit of soul at the lower limits of his range. This surrender is made triumphantly, and best of all, it’s danceable as hell.

A Brit synthpop band, Erasure broke through both in the U.S. and the U.K. with their third album, The Innocents, securing places both on the mainstream and dance charts. “A Little Respect” was the second single, following their other mega-hit, “Chains of Love.” Both songs seem to play with the idea of love as both limiting and limitless, telling us secrets about how to transcend. Erasure has continued to record and release at a steady rate over the decades, up to and including an album titled World Be Gone to be released in May of 2017. Bell and Clarke describe the content as “a thoughtful examination” of “recent political upheavals.” No doubt they are up to the task, but one can always retreat back to 1988, when Erasure’s most serious concerns had to do with the crazy cage that is love. What a world, then and now. – Stacey Pavlick