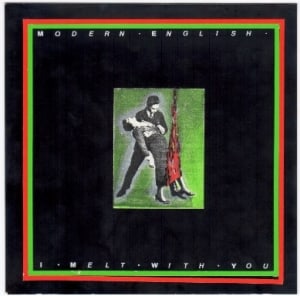 Like many ‘80s hits, Modern English’s “I Melt With You” got big off a movie, namely Valley Girl. But unlike, say, Simple Minds’ “Don’t You Forget About Me,” no one really talks about it in the context of a film. A good friend of mine once rhapsodized to me about the underlying sadness of that latter song – and sold me after playing a pretty good acoustic cover of it. But I imagine he did so with a smile in his mind, because it’s the fucking Breakfast Club song. “I Melt With You” doesn’t elicit the kind of chuckles a lot of its fellows do. Part of this is probably because it’s aged well – it sounds like a lot of today’s indie rock, especially when the dubby backwards pianos hit on the bridge – but also because of how damn poignant it is. This is a wrenching song, all the more so because it’s mostly a pretty brisk pop tune, and its emotional core is tricky to parse.

Singer Robbie Grey says this song is about a couple having sex while nuclear bombs fall, which is kind of absurd and limits the song’s poignancy. It seems like the kind of thing singers tend to say as red herrings, like that whole kerfuffle about “Kid A” being about the first human clone. What’s certain, though, is that there’s a sadness to this song that goes much, much deeper than its surface-level love story. Hearing it for the first time on the radio, half-paying attention to it, you might feel it through the downward-dog synth or the fatalistic chorus (“melting” certainly implies death or some other oblivion). Listen closer and there are those weird references to the world crashing around her face and a pilgrimage to save the human race. The message, at its simplest and clearest, seems to be that everything’s fucked up but it doesn’t matter so long as we’re in it together. Nuclear bombs or none, that’s something anyone can shed a tear about. – Daniel Bromfield 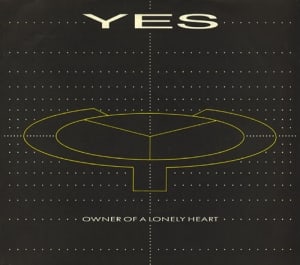 While it’s easy to dismiss “Owner of a Lonely Heart” as cheesy, its subtle innovations elevate it to a spot amongst Yes’ finest moments. Keep in mind, this is the song that assisted in bringing Yes back together. By 1981, a decade after their genre-defining classic “Fragile,” Yes were, indeed, in a fragile state of their own.

With the band informally split after 1980’s Drama, bassist Chris Squire and drummer Alan White formed a new band that placed an emphasis on pop hooks: Cinema. Their new guitar player and vocalist, Trevor Rabin, would be responsible for the majority of “Owner of a Lonely Heart”’s chart topping melodies and soaring chord progressions. After some convincing, Yes vocalist Jon Anderson was back on board, and the arguments for forming a new band quickly dissolved;Yes would return with their new found poptimism in tow.

“Owner of a Lonely Heart”’s two greatest innovations were overlooked on its initial release: its use of a short, drum break sample of Funk Inc’s “Kool Is Back” and the prominent sounds of both the Synclavier and the Fairlight CMI sampler. The Fairlight would go on to be used by prominent musicians such as Kate Bush and Peter Gabriel. The drum sample was deemed by Questlove to be one of the first uses of a sample as a breakbeat. These innovations were provided by producer and former Yes-vocalist, Trevor Horn, the man declared to have “invented the ’80s.” His other credits include co-writing and producing another ’80s staple: The Buggles’ “Video Killed the Radio Star.”