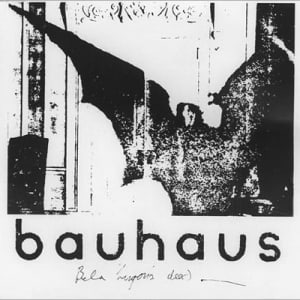 This track was featured in the 1982 live album Press Eject and Give Me the Tape. Although it never reached the popular music charts, this gothic hit is now known as the quintessential Bauhaus song and is canonical within the goth/goth-rock/death-rock movements. It highlights Bauhaus’s penchant for being extraordinarily creative with music.

A somewhat Bossa Nova-inspired drumbeat, featuring off-beat rim shots over a four-on-the-floor bass makes it utterly danceable, yet paradoxically odd at the same time. Atmospheric guitar scrapings and sparse electronic noises add to the dismal, decaying chamber that is created with this song. Intermittent bass notes prop up the chorus of the song, leading into deep, baritone, part-ranted/part-sung lyrics:
“White on white translucent black capes/ Back on the rack/ Bela Lugosi’s dead/ The bats have left the bell tower/ The victims have been bled/ Red velvet lines the black box/ Bela Lugosi’s dead.”

These lyrics fit the overarching gothic darkness of the song, and Peter Murphy’s delivery, creepiness factor and wailing add to the overall ghastliness. Daniel Ash’s guitars also frame this song as a little off, employing chords with conflicting notes, a tactic oft-employed by gothic musicians. To cement this song’s place in gothic night-club canon, it clocks in at a Sisters of Mercy-worthy 9 minutes 36 seconds.

“Bela Lugosi’s Dead” set the tone and stage for the 1983 classic vampire movie The Hunger. Murphy’s gaunt face and wiry frame helped to define what goth would look like for years to come. Similarly, this song set the stage for much of the deathrock and gothic genre, being innovative, strange and undeniably different from the mainstream.

But, like in The Hunger, songs season over time and are revived after years of torpor. Being such a mainstay of the batcave club scene, it has been covered by several artists. CHVRCHES contributed a bubblegum pop version of the song for the 2014 teenage boarding-school flick Vampire Academy. Nouvelle Vague keeps it slow and sultry, opting for organ instead of bass and whispering lyrics at times. The Italian death metal outfit Opera IX capitalizes on the macabre chord structures and noisy elements but adds a baroque harpsichord under the double-kick angst.

Bela Lugosi, who played Count Dracula in the original 1931 movie Dracula, had his own legacy. Bauhaus turned that legacy into an undead one which cross pollinated film and music with this song. Yay vampires! – Cedric Justice 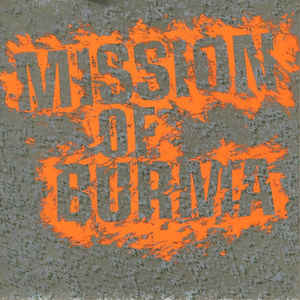 Two of Mission of Burma’s best songs came from a pair of “That’s.” “That’s When I Reach for My Revolver” and “That’s How I Escaped My Certain Fate.” “That’s When I Reach for My Revolver” was the centerpiece of their debut EP, Signals, Calls and Marches and allegedly got them in a bit of trouble. Guitarist Roger Miller admitted that the clean, nearly pop sound of “Revolver” suckered fans in that were unprepared for Mission of Burma’s (in)famously ear-destroying live shows. “Certain Fate” closed their landmark Vs. and was the evil twin of “Revolver,” a proof of concept that Burma could be the nosiest, most chaotic band in punk and still carry a tune. And perfectly between the two was Burma’s single greatest moment “Academy Fight Song.”

It held a fresh pop sheen, acting as the connective music between Big Star and Weezer, but it was played with a furious edge. The chorus of “I’m NOT NOT NOT NOT your academy!” was as catchy as Burma came, but the anti-authoritarian cry was in its DNA. The opening salvo acted like a military marching order, thanks to Roger Miller’s constantly shifting guitar and the spikey bass work of Clint Conley. Conley’s anthemic tenor paints a strange, and occasionally vague, picture of rebellion. The opening “Walk into my room/ Ask me jerky questions,” could be from any teenager eye-rolling at their parents, but the narrative opens up in unexpected ways. After a bit more angry fist-shaking, Conley softens. “I’m not judging you/ I’m judging me/ My academy,” it’s not exactly apathetic, it’s more confused than anything. Conley analyzes his initial reaction of frustration and has no clue why he’s so irritated, and instead starts looking at his general worldview. It’s more nuanced than the average punk song, but nearly everything on “Academy Fight Song” is better than the average punk song. – Nathan Stevens